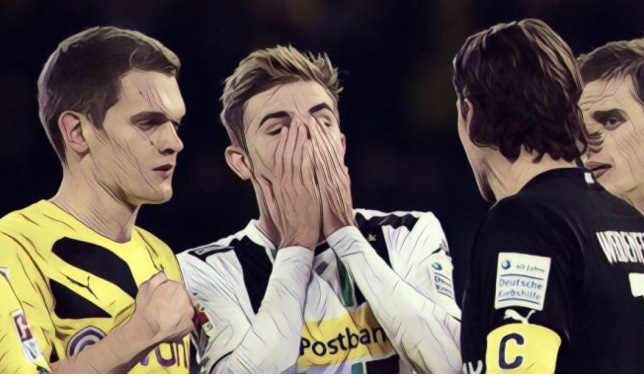 Goals are great, but let’s be honest, sometimes, own goals are even greater. Not the scrappy ones or the deflected ones but the genuinely confusing ones.

The ones that would have been “goal of the season” contenders if they had been scored at the other end.

In our continuing series of watching good footballers being bad at football, let’s enjoy 5 of the best/worst own goals.

Poor old Christoph Kramer, remember him? He’s the guy who got knocked out while playing for Germany in the World Cup Final and now doesn’t remember winning it… Something tells us he wishes he could forget this too. A perfect example of a great own goal, the keeper had no chance!

What a hit! Milan Gajic, playing for FC St Gallen in the Swiss league scored this absolute belter of an own goal. The ball drops out of the air, you catch it sweetly as it falls, the ball rockets off your boot into the top corner leaving the keeper stranded. What a moment! Except when it’s at the wrong end.

Younger readers might just know Lee Dixon as a face from ITV but there was a time when he was making a living scoring some absolute peaches for teams other than his own. Ok, that’s not fair but look at this! He takes a touch, cuts inside and that chip, (against who else but David Seaman obviously), is inch-perfect. “Nice one Dicko!”

Scoring an own goal can be pretty humiliating. In scoring an own goal you’ve basically done the opposite of what you’re supposed to be doing out on the pitch. Just the act of scoring against your own team, it can’t really get much worse ca…

Oh wait, there’s the Chris Brass own goal when Bury played Darlington in 2006, you know, the one where he smashed himself in the face, broke his own nose and scored an own goal all at the same time… Yeah that’s actually much worse and much more humiliating.

Read Also: Five of the best goals from the Halfway line