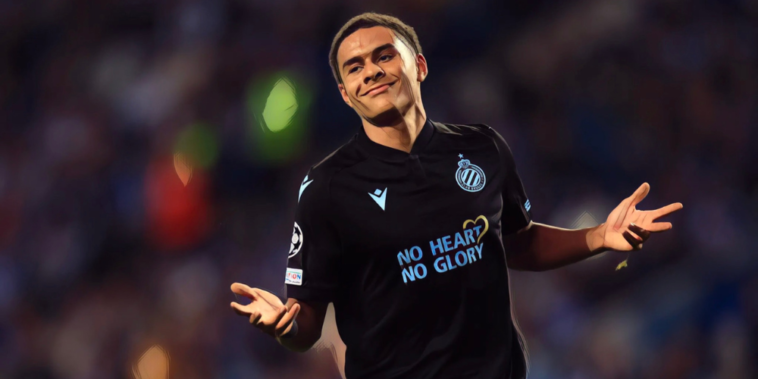 Antonio Nusa wrote his name into the record books as Club Brugge thrashed Porto this week, with the 17-year-old marking his debut with a goal against the Portuguese side.

The Norwegian teenager raced away to score Brugge’s fourth of the evening, as the Belgians stunned Porto with a 4-0 win at The Estádio do Dragão.

Following Nusa’s debut goal, we look at where the forward ranks among the five youngest goalscorers in Champions League history.

Plucked from Barcelona’s famed La Masia academy, Cesc Fabregas was promised an easier route to first-team football at Arsenal and the midfielder did not have to wait long for his opportunity under Arsene Wenger.

Handed his debut as a 16-year-old, Fabregas was slowly integrated into the first-team at Highbury and set a whole host of records including becoming their youngest ever player. The Spaniard would make his mark in Europe also, becoming the club’s youngest ever Champions League goalscorer when he found the net in a 5-1 win over Rosenborg in 2004.

Despite winning a host of major honours including the Premier League with Chelsea, La Liga with Barcelona and the World Cup with Spain, Fabregas never quite reached the pinnacle in the Champions League, his nearest miss being part of the Arsenal side beaten in the 2006 final.

Another graduate of the Barcelona academy, Bojan was once regarded as the heir to Lionel Messi at the Camp Nou. Whilst those lofty comparisons seem far-fetched in hindsight, the former Stoke forward began his career in impressive fashion.

Having broken Messi’s record as Barcelona’s youngest ever player, Bojan scored an impressive 12 goals in all competitions in his debut season, including his first Champions League goal.

That came in a quarter-final at Schalke, as Bojan scored the only goal of the game to give his side a precious first-leg lead. Barcelona’s run ended with semi-final defeat to eventual winners Manchester United, though Bojan’s place in history was secured.

His career never quite hit the heights projected, though he won the Champions League twice with the forward an unused substitute during Barcelona’s final victories in 2009 and 2011.

Fractionally younger than Bojan is current Chelsea midfielder Kovacic, whose precocious talent was recognised by Dinamo Zagreb as they threw him into Champions League action as a teenager.

Having come through an acid test against Real Madrid on his first appearance in the competition, Kovacic became the second youngest goalscorer in the tournament’s history when he gave Zagreb the lead against French side Lyon.

The game ultimately ended in disappointment and a humbling 7-1 defeat for the Croatian outfit, though it did little to harm the midfielder’s progress as he went on to become the club’s youngest ever captain.

No doubt a piece of pub quiz trivia known only by the most statistician-like of football fans, Ghanaian forward Ofori-Quaye became the youngest goalscorer in Champions League history after finding the net for Olympiakos back in 1997, creating a record that stood for over 22 years.

That the goal came as a consolation in a 5-1 defeat is bound to matter little to the history-maker, who was regarded as a bright prospect upon his arrival at the Greek side. Whilst he would make little impact on Europe throughout the rest of his career, he did win six successive league titles with the club before leaving in 2003.

Spells at six clubs including the likes of OFI Crete and AEL Limassol would follow, whilst he also earned several caps for Ghana and featured at the 2000 Africa Cup of Nations.

Nusa’s goal at Porto makes him the second-youngest goalscorer in Champions League history, with the forward celebrating his European debut with the fourth goal of a 4-0 win in Portugal.

Brugge have began their campaign with back-to-back wins to top Group B after two fixtures, following a win over Bayer Leverkusen with an emphatic win at Porto.

The Norwegian-born Nusa began his career at Stabæk, the same club that produced Martin Odegaard, before making the move to Brugge in 2021.

He came on in the 75th minute of the win at Porto before making his mark late on, with Europe’s top clubs sure to have taken notice.

Fati made headlines across European football following his emergence at Barcelona, becoming the club’s youngest ever goalscorer and the third youngest goalscorer in the history of La Liga.

The Guineau-Bissau-born winger then wrote his name into Champions League history in 2019, as he became the youngest goalscorer in the competition’s history when he netted the winner against Inter Milan at the San Siro.

Fati has since made 65 appearances for Barcelona, scoring 21 goals, and has been capped four times for Spain.