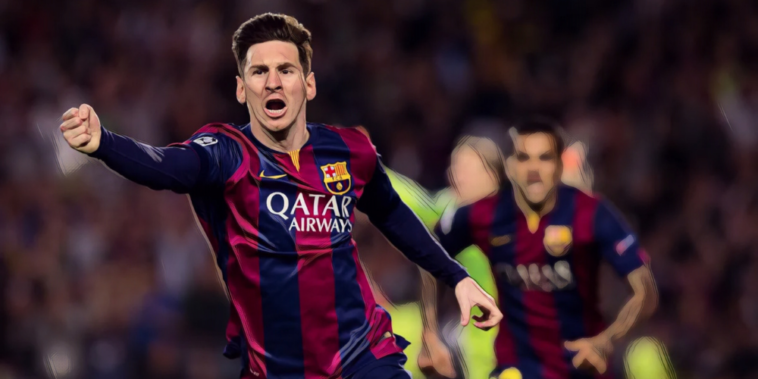 Lionel Messi’s genius is such that superlatives have followed almost each and every performance in a career which has scaled unprecedented heights.

Messi has so often set records tumbling and pulses racing as the Argentine embarrasses yet another defender, with his collection of iconic performances a long one.

Fans of football’s finest will have their own fondest recollections. The El Clásico hat-trick whilst still teenager against Real Madrid announced the arrival of a genuine superstar, whilst his dismantling of Manchester United in the 2011 Champions League final saw him shine as the conductor of perhaps club football’s greatest ever side.

The greatest players define the biggest of occasions and few have done so as often as Messi. When the stakes are at their highest, he has singlehandedly decided the outcome of games.

Among his collection of compelling individual performances came during the 2014/15 Champions League semi-finals, as Barcelona welcomed a Bundesliga behemoth to the Camp Nou.

When the titans of Catalonia and Bavaria collide in continental competition, it is a fixture that the watching world stops to watch.

Leading the Bayern challenge was a familiar face as Pep Guardiola made his return to the Camp Nou, the Spaniard having led Barcelona during their greatest era before taking on a new challenge in German football.

Guardiola was well aware of Messi’s threat to his side’s hopes and for the opening 75 minutes executed the perfect tactical game-plan – following a hasty defensive re-jig –  to contain the Catalans’ leading light.

Missing several senior names the visitors initially lined up with a back three of Rafinha, Jerome Boateng and Medhi Benatia, before adapting to the game as Barcelona cut apart the Bavarians in the opening period.

The changes worked and resilient performance from a Bayern side lacking the twin threat of Arjen Robben and Franck Ribery appeared set to grind out a goalless draw as the first leg encounter approached the final 15 minutes.

The warning signs had been there before Messi’s opening goal of the evening, as the number ten danced and weaved between Bayern challenges, searching for his moment.

Just after the hour he produced an exquisite touch to Dani Alves, before a floated pass released Neymar in behind soon after, the alertness of Manuel Neuer all that prevented the deadlock being broken.

Bayern, coached into Guardiola’s possession principles, became just the second team in 442 games to have more of the ball than Barcelona, but it was a slack moment that enabled Messi to open the scoring.

Neuer’s eagerness to start an attack saw his quickly-taken free-kick intercepted, with Alves first to react as he nudged the ball into the path of Messi.

Coming inside onto his stronger left foot, there was a predictable outcome as he dropped a shoulder and lashed home inside Neuer’s near post. The goal, struck sweetly from the edge of the area, sparked mass celebrations from the Catalan crowd.

Relief swept around the Camp Nou and the frustration that had dominated the atmosphere was replaced with euphoria inside the space of just three second-half minutes.

Bayern were disappointed with the manner of Messi’s opener, though there was a sense of helplessness as the unstoppable Argentine scored his second soon after.

It was a moment which reemphasised his status as world’s premier player, tormenting defenders of the highest calibre to put Barcelona on course to reach the final in Berlin.

Ivan Rakitic’s pass found Messi in a pocket of space, with Jerome Boateng faced with football’s most daunting challenge as he backpeddled into position with Messi bearing down on goal.

Feinting inside and then outside with a bewitching fluidity, Messi’s magical movement left Boateng bamboozled, bewildered and tumbling to the turf.

The dumbfounded defender could only watch on – almost remaining prone – as Messi lifted a delicate finish over the onrushing Neuer.

It was a moment of ice-cold composure in the intensity of the Camp Nou pressure-cooker, with Rafinha’s desperate lunge on the goal-line in vain as Messi’s magical moment doubled the host’s lead.

Guardiola had prophetically claimed pre-match that there was no system or coach capable of containing Messi, who created a third goal on the counter as Bayern were punished for their naive push forward in search of a crucial away goal.

His pass was weighted perfectly into the path of Neymar to put the result beyond all doubt, as the Brazilian made no mistake as he raced away to make it three for the home side.

A game which had appeared to be slipping away from the Spaniards had been illuminated by the majestic Messi, a footballer capable of – and producing – breathtaking brilliance for Barcelona.

Messi’s double took him to 78 goals in just 100 European fixtures for Barcelona, moving him ahead of Cristiano Ronaldo as the Champions League’s all-time record goalscorer.

The goals, even in their record-breaking abundance, are just a microscopic facet of his greatness. Messi, at his best under the bright lights of one of football’s great sporting arenas, was pure magic and a man who made the insane become routine.

Messi had scored 51 goals in his last 50 appearances before the semi-final first leg, though saved one of his finest showings for when it mattered most.

Barcelona progressed to the final 5-3 on aggregate after the return leg and beat Juventus in the German capital to be crowned as champions of Europe, adding the Champions League to their La Liga and Copa del Rey trophies in a historic treble-winning season.

Messi, as ever, was at the centre of their success.

‘Unstoppable’ was the word Guardiola used to describe the South American superstar post-match. In an era where superlatives have been thrown at Messi with repetitive regularity, there was arguably no term more fitting following his dazzling display against Bayern Munich.