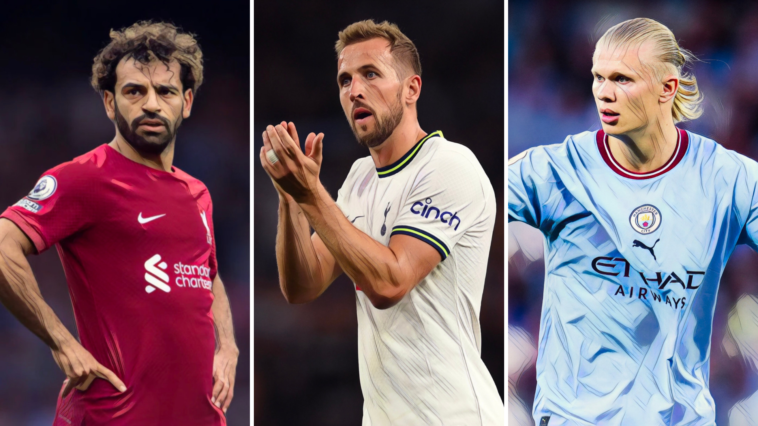 Todd Boehly has suggested the Premier League follows an American approach with an All-Star game, with the new Chelsea owner proposing the fixture to raise funds for the English footballing pyramid.

Boehly’s suggestion is for a North vs South divide for the Premier League’s All-Star game and we’ve decided to select our XIs for a potential clash.

The northern side would expect to be dominated by names from Manchester City and Liverpool, with Alisson edging out compatriot Ederson for our position as number one.

The Brazilian has proven a transformative signing for Liverpool and often ousts Ederson for the position as the national team’s number one. Last season he won the Premier League’s Golden Glove for a second time and is perhaps the best one-vs-one goalkeeper in the game.

An integral part of Manchester City’s winning machine, Cancelo operates as a full-back only in name. The Portugal international pops up in unique areas of the pitch, combining the traditional work of a defender with playmaker-like qualities further forward.

After a mixed first season at Manchester United, the centre-back is beginning to show his true value, with the upturn in form for Erik ten Hag’s team having been built on the foundation of the Frenchman’s class and composure.

Manchester United have won every game they've played with Varane and Martinez at the back 🧱 pic.twitter.com/CVJrGvBl6D

The Dutch defender has been a cornerstone of Liverpool’s success, having won a clean sweep of major honours since signing for the Reds in January 2018. It’s been almost four years since that move and Van Dijk is still yet to lose a game at Anfield.

There was some surprise when Jurgen Klopp raided relegated Hull to sign Andy Robertson in 2017, but the signing of the Scot has proven one of the German’s greatest buys.

Five seasons at Liverpool have resulted in seven trophies and half a decade of consistency, with Robertson’s endless energy a feature of Klopp’s side. He has now recorded 50 assists in the Premier League and is just four from eclipsing Leighton Baines’ divisional record for a defender.

The best player in the Premier League? Few footballers can raise the level of their team with individual brilliance quite like De Bruyne, who even in a star-studded Manchester City side often looks a cut above.

Four league titles, back-to-back PFA Player of the Year awards and an assist-per-game ratio better than any other player inside the Premier League’s all-time top 10, it’s time to begin discussing De Bruyne as a part of the division’s all-time best XI.

Not so long ago there were question marks over whether Thiago was suited to Liverpool’s midfield. Nowadays, there’s a sense of dread whenever he’s absent. The Spaniard makes the Reds tick and Liverpool are a better side when he is part of it.

The fact that he exerts such a level of control with a brand of football to savour makes Thiago a shoo-in for this team, a footballer whose disguised passes and sharp turns are more than fitting for an All-Star spectacle.

Mohamed Salah has perhaps been the face of Liverpool’s success in the Klopp era, a signing who reached new levels as part of a well-oiled machine at Anfield.

The Egyptian has scored 120 league goals in 186 games for Liverpool, a return which has resulted in three Premier League Golden Boots and a host of team and individual accolades. Salah has scored 20+ goals in four of his five seasons at Anfield, redefining the expectations of a wide forward.

The one campaign he failed to reach the 20-goal mark, he scored 19 in 2019/20. Consistency of the highest standard.

The homegrown hero of Manchester City’s current crop, Phil Foden has emerged from the club’s academy ranks to take his place among City’s selection of stars.

The 22-year-old has won the PFA Young Player of the Year in consecutive campaigns and is the sort of footballer English football has been craving, one who comes alive in tight areas of the pitch with his silky street-footballer style.

Newcastle’s Allan Saint-Maximin represents a wildcard alternative, with the flamboyant Frenchman sure to bring the entertainment factor to an All-Star clash.

Cristiano Ronaldo might be out of favour at present, but it wouldn’t be an All-Star game without the presence of the Premier League’s – and world football’s – biggest name.

Ronaldo’s Instagram following stands at 476 million and makes him the most followed person on the social media app, with his total dwarfing his closest Premier League rival in Mohamed Salah (56.2m).

The five-time Ballon d’Or winner scored 24 goals in all competitions last season and will be hoping to regain his importance to the Manchester United side.

English football has welcomed a new superstar to its shores this season, with Erling Haaland having wasted little time in announcing himself as the Premier League’s latest star attraction.

Haaland has scored 12 goals in just eight games in all competitions for Manchester City this season, including back-to-back hat-tricks inside his first five Premier League games.

Jude Bellingham has no idea how to stop Erling Haaland 🤷‍♂️ pic.twitter.com/OaptDbkVC3

The sky appears the limit for the Norwegian goal-machine, who at 22 has a number of goalscoring records in his sights.

More than a decade of stellar service for Tottenham and 139 caps for France earn Hugo Lloris his place in our combined team of Southern stars.

The Spurs shot-stopper has captained club and country with distinction in recent campaigns, including leading France to World Cup success in 2018.

He will form part of the Les Bleus side who will attempt to defend their status as world champions in Qatar this winter and is closing in on breaking Lillian Thuram’s appearance record for France.

Reece James continues to go from strength to strength at Chelsea with the Cobham graduate having developed into one of Europe’s finest full-backs.

Powerful, creative and full of drive, he has provided more goal involvements than any other Premier League defender since the start of last season and will be hoping to beat competition from the likes of Trent Alexander-Arnold and Kyle Walker for a place in England’s World Cup side in Qatar.

Reece James has been directly involved in more Premier League goals than any other defender since the start of last season:

Cristian Romero is fast developing a reputation as one of the division’s best defenders, with the Argentine centre-back having been a colossal presence for Spurs.

Romero signed for Spurs after an impressive spell at Atalanta and has excelled in north London. His aggressive brand of defending and quality in possession have shone at Spurs, with ‘Cuti’ quickly becoming a fan favourite.

Thiago Silva might be approaching his 38th birthday this month, but the centre-back’s evergreen elegance continues to shine at Chelsea.

Questions were asked following Chelsea’s decision to bring the veteran defender to the Premier League in 2020, but Silva has proven that class is indeed permanent with a number of outstanding showings marshalling the Blues’ backline.

Part of a summer recruitment drive that has Arsenal dreaming of a Champions League return, Oleksandr Zinchenko has already proven a shrewd signing from Manchester City. The Ukrainian has helped transform the Arsenal side with his technical talent and security in possession.

Comfortable at full-back and in midfield, his tactical intelligence and the fluidity of his game will provide the Gunners with options this season.

Declan Rice breaks up the domination of the Premier League’s big six, with the West Ham midfielder forming part of our Southern side’s engine room.

The England international has evolved into a complete midfielder with the Hammers and was one of just two Premier League players who reached 30+ for tackles made, interceptions, clearances, take-ons completed and aerial duels won last season.

Now captaining the side following Mark Noble’s retirement, Rice is getting better and better with increasing influence at the London Stadium.

N’Golo Kante’s inability to remain fit has been a source of frustration at Chelsea, with the midfielder’s influence impossible to replicate.

Often appearing a one-man midfield, Chelsea’s successes in recent seasons have been built around Kante, a footballer whose positioning, timing, and relentless running have overpowered opponents at the highest level.

The jewel in the crown at Arsenal, Bukayo Saka has become the face of an inexperienced Gunners team full of promise and ambition.

Since breaking into the Arsenal team as a teenager, the winger has become a key figure for club and country. The 21-year-old has racked up 138 appearances for the North Londoners and was named as club’s Player of the Season for the 2020/21 and 2021/22 seasons.

Hard to believe Bukayo Saka is only turning 21 today 💫

Does Raheem Sterling remain under-appreciated? A record 131 goals in 339 games and four Premier League winners’ medals was not enough to earn prominent status at Manchester City during his latter period with the club, with Sterling signing for Chelsea during the summer.

The west Londoners will hope to bring the best from the 27-year-old, who won the FWA Footballer of the Year award in 2018/19. At international level, he has often produced for England and has 15 goals in his past 30 appearances for the Three Lions.

One part of a devastating double-act at Tottenham, Son Heung-min has elevated his game to world-class levels in north London.

Last season the South Korean won a share of the Premier League’s Golden Boot, having scored 23 league goals for Spurs in a career-best campaign. The 29-year-old has provided 206 goals and assists in 332 appearances for Spurs and has been named as the club’s Player of the Season on three occasions.

One of the best centre-forwards in world football, Harry Kane is now third on the Premier League’s all-time goal chart following a strong start to the current campaign.

Only Alan Shearer (260) and Wayne Rooney (206) have scored more than Kane’s 188 goals in the division, while the 29-year-old is also closing in on the all-time goal records for both Tottenham and England.

Kane’s game has evolved in recent seasons with the forward mixing predatory instincts around the penalty area with a fine passing range, one which saw him top the Premier League for both goals and assists in 2020/21.

In a team full of superstars, he would prove the talisman for the South XI.