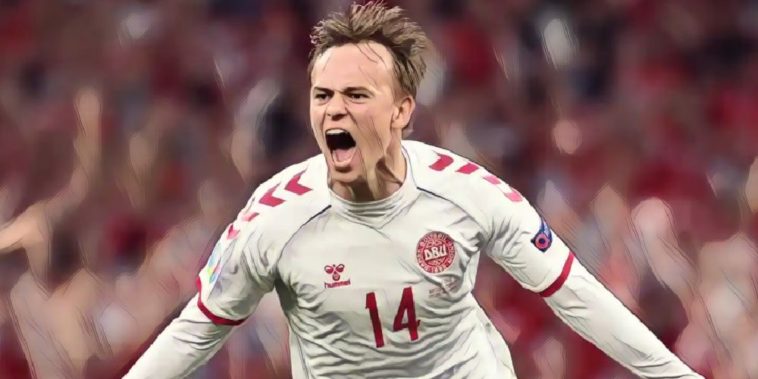 In true major tournament custom, Euro 2020 has served as the platform for a number of young stars to impress, with a select few, in particular, catching the eye.

From Michael Owen at the World Cup in 1998, to Wayne Rooney at Euro 2004, the international stage has the ability to propel a young star into the spotlight, converting them from potential prospects into overnight sensations.

That’s not of course to say that the old-timers can’t also thrive – just look at Giorgio Chiellini and Leonardo Bonucci with Italy – yet there’s simply something joyful about watching a relatively unknown, young quantity take a tournament by the scruff of the neck.

As the current competition nears its climax, we’ve picked the five players who’ve enjoyed a breakthrough summer at Euro 2020.

Arguably in contention to be the player of the tournament let alone just one of it’s emerging young stars, Pedri has announced himself onto the world stage in tremendous fashion.

A lot of noise has been coming out of Barcelona about their young prodigy over the last 12 months, yet it’s taken this summer for most onlookers to really sit up and take notice of the creative midfielder, who has simply shone in Luis Enrique’s side.

🔐 Pedri made 11 key passes at #EURO2020, more than any other player aged 21 and under has managed at the tournament so far #ESP pic.twitter.com/NwrEMDFF42

Thrust into a much-changed and refreshed Spain squad, few probably expected the 18-year-old to feature quite so heavily, yet he’s gone on to start every one of La Roja’s games and play near enough every minute as part of their voyage to the semi-final.

There was of course that notable own-goal in the barnstorming 5-3 win over Croatia, although the teenager will expect much of the blame to go to ‘keeper Unai Simon, who failed to control a fizzing, yet no doubt manageable back pass.

At the other end of the pitch, the former Las Palmas player has been Spain’s creative driving force, notably keeping Liverpool playmaker Thiago Alcantara out of the side for the whole of the tournament.

While he was impressive throughout their run to the last four, his display at Wembley was perhaps the best of the lot, as he dictated the tempo up against a significantly more experienced Italian midfield trio of Jorginho, Marco Verratti and Nicolo Barella.

Thrust into the Danish starting XI following the horrific collapse of talisman Christian Eriksen in the opening game, Mikkel Damsgaard has more than capitalised on what must have been a slightly bittersweet inclusion, taking on the mantle of the nation’s key creative force in the absence of his stricken teammate.

Drifting across the front line behind Martin Braithwaite and Yousef Poulsen, the 21-year-old quickly showcased his talent in Denmark’s excellent display in the eventual 2-1 defeat to Belgium, before rubber-stamping that quality in the final group game against Russia.

With Kasper Hjulmand’s side needing a win, the Sampdoria youngster got his side off to the best possible start, curling in a stunning effort after 38 minutes to give his side the lead, with the Danes going on to run out 4-1 winners to progress to the knockout stage.

Another strong showing came as Denmark ran riot against Wales in the last-16, before he put in another solid shift against Czech Republic, in the hard-fought 2-1 quarter-final win.

Perhaps his finest moment of the summer, however, was his dipping free-kick to give his side the lead against England in Wednesday’s semi-final, the young man having the bottle to not only step up to take it in front of a raucous home support but then also to have the quality to execute such a difficult technique.

Although it ultimately proved in vain – much like Kieran Trippier’s stunner three years ago – it’s a further indicator of how talented the forward is. His current club will be thanking their lucky stars that the player still has three years left on his current deal, as suitors are likely to come sniffing around.

Belgian supporters will no doubt look back upon what was a disappointing tournament display in truth, yet one real bright spark has been the ’emergence’ of 19-year-old Jeremy Doku, who set pulses racing with his superb quarter-final display.

The Rennes midfielder is already highly regarded in his native Belgium having come the ranks at Anderlecht, yet Euro 2020 was a clear marker to the rest of Europe just how much of a talent he is, despite a frustrating debut season in France.

The teenager has had to bide his time for involvement, such is the depth in Roberto Martinez’s squad, but was handed a start by the former Everton boss in the 2-0 win over Finland in the final group game.

After sitting out the win over Portugal in the last-16, Doku’s big break really came in the quarter-final’s against Italy, as he was named from the start in the absence of the injured Eden Hazard, ahead of the likes of senior stars Dries Mertens and Yannick Carrasco.

Despite a quiet start, he grew into the game and made his impact just before half-time, driving into the Italian box at rapid speed and forcing Giovanni Di Lorenzo into making a clumsy challenge, with Romelu Lukaku netting from the resulting spot-kick.

Jérémy Doku completed eight take-ons against Italy, the most by any player in single game so far at #EURO2020

After the break, with his side struggling to find an equalise, Doku continued to provide the spark, almost making the breakthrough after weaving his way past a string of defenders, before unleashing an effort that only narrowly sailed over the crossbar.

The Belgian ‘Golden Generation’ may be coming to an end, but that’s not to say there is talent coming through to replace them.

For those Premier League and, more specifically, Arsenal fans, Bukayo Saka is no unknown quantity after impressing at the Emirates over the last few seasons, yet that’s not to say this summer hasn’t been a huge breakout tournament for the teenager.

Still only 19, he has arguably been the Gunners’ best player over the last 18 months and has transferred that form to international duty so smoothly, earning Gareth Southgate’s trust with a string of fine displays.

The versatile forward had impressed at wing-back in the Nations League in the autumn, but it’s further forward where he has been so devastating for England this summer, his pace and dribbling ability a real asset to his country.

After a lively display against Czech Republic in the final group game, Saka kept his place for the last-16 tie with Germany, lining up alongside Harry Kane and Raheem Sterling in attack and proving a valuable commodity in driving England up the pitch, particularly when Southgate opts to deploy a back five.

A slight knock saw him miss out against Ukraine, with Jadon Sancho impressing in his place, yet he once again kept the soon-to-be Manchester United man – and a host of other attacking talent – out of the team for the semi’s.

While it wasn’t his best display of the tournament, he still made a telling contribution, latching on to a Harry Kane through ball before firing the ball across the box, with Simon Kjaer turning into his own net under pressure from Raheem Sterling.

Such impact is likely to see him keep his place for the final, but even if he does not, it should not overshadow what’s been a fine summer for the Arsenal man.

Yes yes, we know what your thinking, Billy Gilmour did only play once, but boy was it some performance he put in in that solitary appearance.

Scotland fans have been crying out for the Chelsea youngster to be handed more game time over the past year or so, despite his lack of minutes at club level, with the nation seemingly in desperate need of a player of his quality in midfield.

After missing out on the opening game, manager Steve Clarke gave the fans what they wanted for the second group game against England, handing the 20-year-old a start against the ‘Auld Enemy’.

A game of huge magnitude and pressure, the occasion appeared not to bother the young man, who bossed the midfield from the off, allowing his counterparts simply no time on the ball to try and get settled.

The midfield maestro only grew more into the game as it progressed and deservingly swooped the man of the match gong at the end of the goalless draw, with Scotland perhaps counting themselves unlucky not to have registered all three points.

Unfortunately for both Gilmour and the Scots, he was forced to miss the final group game after testing positive for Covid-19, yet that display alone sent a real message to those across Europe who may not have been aware of his talent beforehand.

Josko Gvardiol – The teenage Croatian – known as ‘Little Pep’ – had a fine tournament, starting all four of his nation’s games at left-back. Set to return to RB Leipzig this summer after a year on-loan at Dinamo Zagreb.

Shutouts: The countries with the most consecutive clean sheets in Euros history

See also – The best of Jadon Sancho at Borussia Dortmund