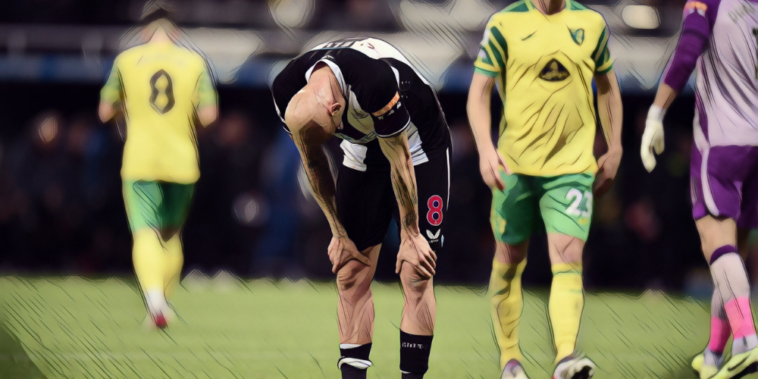 It’s a torrid run of form for the division’s bottom side, but where does it rank in the longest waits for a win at the start of a Premier League campaign?

We’ve looked back at the longest winless runs at the start of a Premier League season.

Everton fans may be slightly concerned by their difficult start to the new season, though the current side’s plight pales into significance compared to the side of 1994/95.

That season Everton failed to win any of their first 12 Premier League fixtures, though somehow managed to survive despite four teams being relegated as the division dropped from 22 to 20 teams.

The appointment of Joe Royle as manager in November was the catalyst, the Liverpudlian guiding the club to five clean sheets in his first five fixtures and away from danger to eventually secure a 15th place finish.

Their turnaround started with a 2-0 win over Liverpool in the Merseyside derby and ended with FA Cup success as Manchester United were beaten at Wembley, the club’s last major trophy.

Remarkably another team who endured a long winless run to begin the season, only to comfortably survive relegation to the second tier.

Derby County failed to win in the first third of the 2000/01 season, though remained in touching distance of the sides above them after securing seven draws.

Jim Smith’s side finally registered their first win of the season on November 18, beating Bradford 2-0 before back-to-back wins in December lifted the Rams away from trouble.

The Midlands outfit finished just one place outside the drop zone, though a huge eight points clear of relegated Manchester City.

Norwich’s 2004/05 side also struggled to turn draws into wins, with eight of the Canaries’ first 13 games ending in stalemates following promotion to the Premier League.

After 13 top-flight fixtures Norwich eventually sealed a first three points of the season, beating Southampton 2-1 at Carrow Road to spark hope of a revival.

It proved a false dawn, however, as Norwich won just once more in their next 11 fixtures with the Canaries condemned to a swift return to the Championship.

Newcastle’s 1-1 draw with Norwich extended the Magpies’ wait for a league win win to 14 games, the fourth-longest sequence at the start of a Premier League season.

The clash with the Canaries was billed as a must-win for Eddie Howe’s side, but Ciaran Clark’s ninth-minute red card hindered hopes of securing a much-needed three points at St James’ Park.

Only four sides have failed to win any of their first 14 games of a Premier League season:

The previous three were all relegated. 👀 pic.twitter.com/Ke3ZpUwfdA

For all the excitement that has greeted the club’s billionaire-backed takeover, the priority for Newcastle must be remaining in the division this season and their winless run has provided new manager Howe with an uphill task.

The previous three teams to reach 14 or more games without winning at the start of a Premier League season all suffered relegation to the second tier.

Millennials may find it hard to believe, but Swindon Town were once a Premier League outfit for a short, short time.

Having secured a place in English football’s top flight for the first time in their history, Swindon’s preparations were hampered by the loss of player-manager Glenn Hoddle to Chelsea.

Replacement John Gorman struggled to reestablish the club’s winning mentality at the top level, as they failed to win in their first 15 fixtures before a 1-0 win over QPR in November.

Swindon secured just four more wins in the league, finishing bottom of the division and 13 points adrift of safety, conceding a whopping 100 goals in the process.

The second-worst winless run at the start of a Premier League season belongs to Queens Park Rangers, who despite an expensive assemble of recruits managed to go 16 fixtures without securing three points in 2012.

It would take until the festive period for Harry Redknapp’s side to record a win, Adel Taarabt’s double securing a first win in December as London rivals Fulham were beaten 2-1 at Loftus Road.

The arrival of Mark Hughes as Redknapp’s replacement did little to boost their fortunes and it proved to be one of just four wins during a miserable season for the club, QPR finishing bottom of the division with just 25 points.

Sheffield United endured the worst-ever start to a Premier League season in 2020/21, failing to win across their opening 17 fixtures of the season.

Chris Wilder’s side had performed above all expectations to secure a ninth-place finish the previous season, challenging for European football for much of the campaign upon their return to the Premier League.

The Blades endured one of the worst cases of second season syndrome in the division’s history, however, their 17-game winless run including 15 defeats and just two draws.

Sheffield United are the first English top-flight team with no wins from their first 17 games since Bolton in 1902-03 😳 pic.twitter.com/aiWJEXkz3p

Wilder’s side secured their first win with a 1-0 victory over Newcastle on January 12, sparking a brief upturn in results as the club won three times in five fixtures.

It was not enough to save Sheffield United from relegation or Wilder’s job, however, as a second slump saw the manager sacked and the Blades return to the Championship.