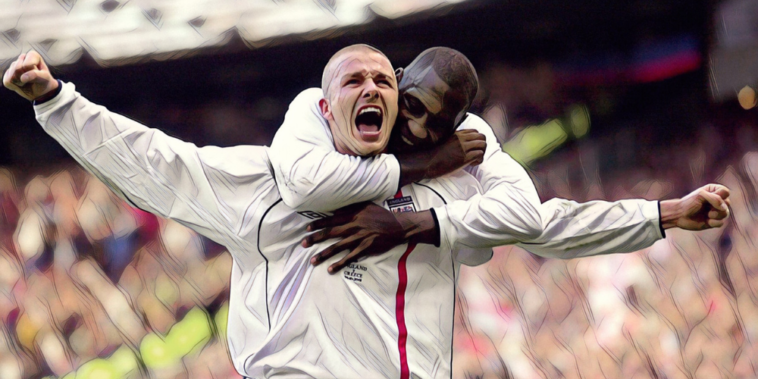 The career of David Beckham is one often difficult to assess, the man who represented some of the game’s greats and became a mega-star both on and off the pitch.

Beckham was a footballing superstar. His face dominated the front and back pages and his fame reached such stratospheric levels that he was arguably the most recognisable man on the planet in even the furthest flung corners of the globe.

His celebrity status has undoubtedly blurred a brilliant legacy, with continual debate over whether the former England captain was in fact overrated or under-appreciated, those conflicting assessments an indication of how the waters around Beckham have been muddied with time.

But brand Beckham should not detract from a fine footballer who often delivered in defining moments.

Beckham’s ascent to superstardom began in the youth ranks of Manchester United, forming part of a contingent of talented hopefuls that would become colloquially known as Fergie’s Fledglings.

The midfielder was cut from a different cloth to even those prospects around him, having moved 200 miles north from his native London as a teenager in the hope of making the grade at his boyhood side.

The remainder of those now legendary graduates – Ryan Giggs, Paul Scholes, Nicky Butt and Gary and Phil Neville – were all of local roots, differing in background to the southern starlet alongside them.

Having formed part of the club’s FA Youth Cup winning side in 1992, Beckham was made to be patient for his opportunity at senior level, embarking on a short loan spell at Preston North End during the 1994/95 season.

Even in those formative years the trademarks that defined his game were apparent, scoring both a fine free-kick and directly from a corner across five appearances at Deepdale, whilst his temporary teammates noted the relentless training pitch dedication to honing his craft.

The departure of the former in particular gave Beckham his shot on the right-hand side, starting 26 league fixtures as the Red Devils secured a domestic double and forming a fine understanding with close friend Gary Neville on the flank.

Beckham scored seven goals during that breakthrough campaign, but it was on the opening day of the following season where catapulted himself into the consciousness of the wider British public.

United’s trip to Wimbledon had been unremarkable heading into the closing stages with the reigning champions in possession of a two-goal lead, only for the narrative at Selhurst Park to change following one swing of Beckham’s boot.

Inside his own half, the midfielder lifted his head and sent an arcing finish over the back-peddling Neil Sullivan, a moment of outrageous audacity that has since been replayed on countless occasions.

A Premier League goal for the ages, and one that made David Beckham a superstar…#PLMoments pic.twitter.com/CuGt6It5Ed

Stood arms outstretched with blond curtained locks and a beaming smile, a nineties icon had arrived.

Another league title and the PFA Young Player of the Season followed as Beckham grew in influence at Old Trafford, whilst he broke into Glenn Hoddle’s England set-up post Euro ’96.

It was on the international stage where the next defining day of his career came, only this time it was for all the wrong reasons.

The Stade Geoffroy-Guichard in Saint-Étienne was the setting as Argentina and England met in what proved a classic World Cup encounter, the two sides sharing four goals in an enthralling first half of their last-16 tie.

The second half was in its infancy when Beckham made a decision that would change his career, greeting a robust collision with Diego Simeone with a moment of petulance.

Floored from the Argentine’s challenge and irked by the midfielder’s subsequent needle, Beckham swung a boot into Simeone’s calf – all under the watchful eye of the referee.

The red card proved both the turning point of Beckham’s career and the tie, as England crashed out on penalties and the dismissed Beckham returned home to a sickening reception.

Harsh headlines, burning effigies and death threats were amongst the vile follow-ons from Beckham’s costly card, the boy who could do no wrong now public enemy number one.

For all the abiding memories of fabulous free-kicks and crosses of pinpoint perfection, at the forefront of Beckham’s attributes was an unbreakable mental fortitude and the following season proved one of redemption.

Focused on football and back amongst the comforts of Old Trafford, Beckham ignored the terrace taunts from opposition fans to play an influential role in arguably English football’s most historic season.

Manchester United conquered all before them to win an unprecedented treble of Premier League, FA Cup and Champions League, with Beckham at the centre of the Red Devils’ astounding success.

He scored a stunning goal during a thrilling FA Cup semi-final win against Arsenal, whilst it was Beckham’s crucial equaliser that helped turn the tide in a must-win final day game against Tottenham to seal the title.

Beckham was there once again as the ultimate success was secured against Bayern Munich, his pair of corner-kick deliveries leading to the stoppage-time goals that dramatically snatched the European Cup from the German’s grasp.

Such was his impact, he finished as runner-up to Rivaldo for both the Ballon d’Or and FIFA World Player of the Year accolades, whilst he again placed second for the latter accolade two seasons later as the turn of the millennium brought Beckham’s peak.

Combining endless energy with a technique the envy of the watching world, he finished as the leading assist provider in the Premier League three times in just four seasons, his practised perfection of delivering the ball with unmistakeable accuracy proving a forward’s dream.

The early 2000s also brought the redemption moment for Beckham; that performance against Greece.

England were in need of a hero as their final qualification fixture for the 2002 World Cup ebbed towards a home defeat, Greece having twice taken the lead against Sven-Göran Eriksson’s side at Old Trafford.

Beckham – shaven-headed and wearing the captain’s armband – had appeared a shining light in a vain attempt to secure England’s passage to Japan and South Korea, working in perpetual motion to regain possession and search for gaps in a resilient Greek defence.

He had risen to the occasion when others had crumbled under the pressure, but as the game approached the third minute of stoppage-time was afforded one last roll of the dice from ‘Beckham territory’.

But for the backdrop of The England Band’s instruments it was a crowd hushed in anticipation, Beckham’s chest visibly expanding with the deep intake of breath as he awaited the referee’s whistle.

Seconds later and those watching on from the stands erupted, Beckham racing off in celebration as his iconic free-kick sealed England’s place at the World Cup finals.

From the nation’s darling to hate-figure and back again, he had come full circle.

England never tasted major tournament success with Beckham amid their ranks, but he was no doubt amongst the Three Lions’ finest performers and captained the side with distinction – ready to run through walls for his nation.

Beckham remained ever influential at club level, but friction began to surface between the midfielder and Ferguson with the latter becoming increasingly irritated by brand Beckham.

He had married wife Victoria – then part of the world’s biggest pop group in the Spice Girls – in the late nineties and the duo had reached a new level of celebrity status in tandem, with every haircut and outfit becoming of public interest as Beckham-mania swept Britain and beyond.

Their deteriorating relationship reached its nadir as Beckham’s face dominated the papers following an FA Cup exit to Arsenal in 2003, his eyebrow sporting a plaster after a stray boot kicked from Ferguson had drawn blood.

That summer – after six league titles and a wealth of individual acclaim – he departed for pastures new, the star signing of the summer for Real Madrid in the midst of their Galactico recruitment policy.

It was an all-star ensemble at the Bernabeu as Beckham joined Luis Figo, Zinedine Zidane and Ronaldo in the Spanish capital, but success proved more difficult that anticipated with a sole La Liga crown coming in his fourth campaign.

That season had seen Beckham fall out of favour with Fabio Capello following the announcement of his impending move to Major League Soccer, but he fought his way back into the Italian’s plans to end his Spanish venture with success.

Beckham was the perfect capture for MLS as the United States sought to kick-start the sport, with LA Galaxy and Hollywood a fitting destination for a footballer who had long straddled the worlds of celebrity and sport.

It was a move that proved a success as Beckham twice won the MLS Cup and brought a new audience to the sport Stateside, whilst his latter career included brief spells at both AC Milan and Paris Saint-Germain.

He became the first English player to win league titles in four countries following Ligue 1 success, in a club career that included spells at European royalty and delivered a wealth of accolades.

Beckham at his best was brilliant, a midfielder capable of scoring and creating in spectacular fashion and one who combined hard-running graft with a genius when striking the ball.

It takes little imagination to recall the familiar posture Beckham took when executing another set-piece special, the left arm rotating upwards as his right foot produced another moment of technical perfection.

Beckham was the man with movie-star good looks and the career which played out wilder than even the most imaginative Hollywood script writers could have envisaged.