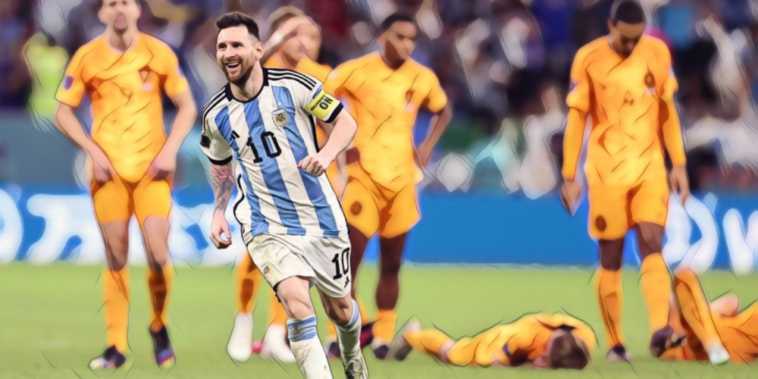 The World Cup’s final four is set after a thrilling round of quarter-final ties, with one of France, Argentina, Morocco or Croatia set to be crowned world champions this weekend.

France are bidding to become the first team since 1962 to defend the trophy after beating England and could face Croatia – conquerors of Brazil in the last eight – in a rematch of the 2018 final.

Lionel Messi’s World Cup dream remains alive after Argentina edged the Netherlands on penalties, while Morocco have made history as the first ever African team to reach this stage.

Here is our World Cup Best XI from the quarter-finals.

Livakovic was the hero of the last-16 win over Japan for Croatia, after making three saves during their shootout success. Once again, he was man-of-the-match as Zlatko Dalic’s side won on penalties to dump out favourites Brazil.

No goalkeeper at the 2022 World Cup has made more saves in a single match than Livakovic’s 11 against Brazil, while the 27-year-old saved from Rodrygo in the shootout to send Croatia into a second straight semi-final.

No keeper has made more saves than him at the World Cup 🧤 pic.twitter.com/INzKxq00cd

The win continued Croatia’s remarkable record of going to extra time and in shootouts. Since 1998, just two of Croatia’s knockout round games at the World Cup have not gone to extra time, while it’s now four wins from four on penalties.

Juranovic was an outstanding performer as Croatia upset Brazil to reach the last four, with the Celtic defender a marauding presence down the right flank.

From a defensive perspective he was equal to the challenge of the South Americans, making three clearances, seven ball recoveries and winning each of his five duels. Crucially, he was not dribbled past once, a fine feat given the calibre of opposition.

Morocco’s success has been built on a resolute defence that has conceded just once in five fixtures to date. The Atlas Lions – now the first African team to reach the last four – held firm to frustrate Portugal and secure a famous 1-0 win.

Jawad El-Yamiq was at the centre of their defensive determination and made a game-leading ten clearances, more than double the number of his nearest teammate. Having replaced the injured Nayef Aguerd in the side, the Real Valladolid defender was a towering presence for the tournament’s surprise package.

Snuffed out danger, won tackles and stepped into midfield with confidence, it it easy to see why Europe’s top clubs are scrambling to sign Josko Gvardiol.

The 20-year-old was instrumental again as Croatia beat Brazil to reach the semi-finals, with his defensive partnership alongside the experienced Dejan Lovren the bedrock of their success.

One of several prospects who have seen their price-tag rise by a considerable amount in Qatar, he leads the World Cup for clearances made.

No player has made more clearances at #Qatar2022 than Josko Gvardiol (32) 🇭🇷🦸‍♂️ pic.twitter.com/wQHIgBsGDO

Crucial at both ends of the pitch, Attiat-Allah played his part in Morocco’s water-tight rearguard as he ensured there was little progress down the Portuguese right.

Only El-Yamiq made more clearances than the left-back as Morocco earned another clean sheet. Going forward he stretched the game with bursts forward down the flank and made three key passes, including the cross to assist Youssef En-Nesyri’s winner.

A brilliant pass for the most important goal in Morocco's history. 🪄 pic.twitter.com/NSFxUw3PET

Croatia’s midfield has been the foundation of their run to a second successive semi-final, with the trio of Mateo Kovacic, Luka Modric and Marcelo Brozovic a combination of brilliant technique and tenacity.

Each excelled in the win over Brazil, hounding the midfield of the South Americans to regain possession and keeping the ball moving with intelligent distribution. Modric, as ever, was the heartbeat of the performance and recovered from a slow start to orchestrate.

This will undoubtedly be Modric’s last World Cup, but rather than wilt under the pressure, he appears to be free and full of enjoyment. That bodes well for the Croatians, who are looking to go one step further than in 2018.

Is there a blade of grass that Sofyan Amrabat has not covered this tournament?

The midfielder was everywhere, again, as Morocco upset the odds to beat Portugal and reach the last four. Amrabat was disciplined in his defensive work as he patrolled the pitch ahead of his backline, working tirelessly for the cause as Morocco’s work-rate and organisation paved the path to the semi-finals.

It was another performance that underlined why several top European clubs are considering an approach for the Fiorentina midfielder. His team-mate, Azzedine Ounahi, matched his industry and it would come as little surprise to see a wealthier side take a chance on the impressive Angers youngster this winter.

Antoine Griezmann has sparkled for France in this tournament, a creator who has illuminated contests with moments of real quality.

France were second-best for long periods against England, but reached the semi-finals after Griezmann created both goals in their 2-1 win. Part wizard and part work-horse, his movement caused problems for England’s midfield as he drifted into dangerous areas between lines.

After teeing up Aurelien Tchouameni for France’s first, his wondrous cross was turned in by Olivier Giroud to ensure the champions marched on into the last four. No player has now created more goals than Griezmann in Qatar.

England’s most dangerous threat and unfortunate to be on the losing side against France.

Saka has been brilliant this tournament in a coming-of-age campaign for the Arsenal winger, who gave Theo Hernandez a difficult evening with his direct approach and bursts between lines. He created England’s equaliser after a being brought down for the first penalty and it was a surprise when he was substituted as England chased the game.

It’s pointing out the obvious at this point, but Saka is set for a major role in England’s future.

Lionel Messi will hope the stars are aligning in what is set to be his final World Cup, with Argentina having recovered from an opening shock to reach the semi-final.

It is difficult to imagine how Argentina could have reached this stage without Messi, who has taken control of La Albiceleste’s tournament with a string of stunning performances. Against the Netherlands he created one and scored another, with his assist for Nahuel Molina the type of pass perhaps only he is capable of.

The goal to put Argentina in the lead… 🇦🇷

…but the vision from Messi to pick him out!! 🙌

He is on a mission this World Cup! 👀#ITVFootball | #FIFAWorldCup pic.twitter.com/ILoQqtTga9

An ice-cool penalty made it four goals for the tournament, with only Kylian Mbappe having scored more. Argentina have their flaws, but Messi’s brilliance can continue covering cracks.

Came off the bench to turn the game around for the Netherlands, who abandoned their Total Football principles for a rather more direct approach. At times it appeared a scene from Jurassic Park in the Argentina box, as the Dutch loaded the area with giants and fired in delivieries.

Weghorst brought the Oranje back into the game with a brilliant header, before keeping his cool to score a dramatic equaliser after a genius free-kick routine in the final seconds. It was a reminder of his quality after a difficult spell at Burnley last season, with Weghorst also scoring from the spot in the shootout.

Did all he could. 🇳🇱 pic.twitter.com/3nVt2cl8is

It wasn’t enough as the Dutch lost on penalties, but the 30-year-old could hardly have done more.