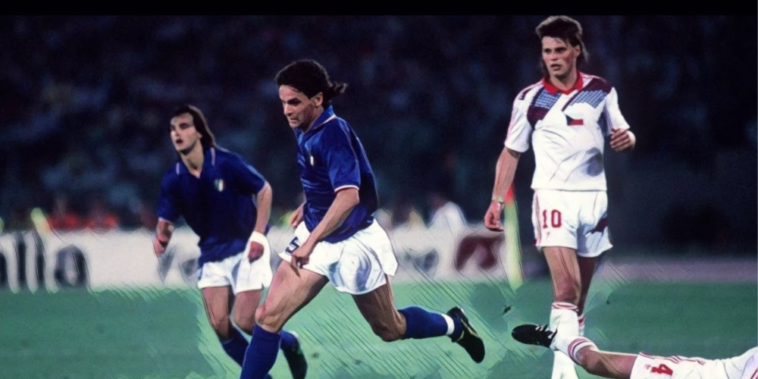 Italia ’90 remains one of the most memorable World Cup tournaments, a competition full of drama and moments etched into footballing folklore.

Goals may have been at a premium during a tournament in which defences often came out on top, but there were some crackers scored from a number of iconic names.

Here are five of the best goals scored at the 1990 World Cup.

David Platt’s dramatic winner against Belgium remains one of England’s most memorable World Cup moments, a goal of sublime technique and timing to send the Three Lions into the last eight.

Platt had begun the tournament on the fringes as one of the more inexperienced players in England’s ranks, but made his name with a brilliant goal against Belgium – his first at international level.

With penalties looming, Platt struck the winning goal after swivelling to meet Paul Gascoigne’s free-kick into the area. It was an audacious and instinctive effort from the midfielder which sparked wild celebrations from the English contingent in Bologna.

Substitute David Platt grabs an extra-time winner for @England to send the Three Lions into the quarter-finals of Italia 90 pic.twitter.com/Uhsp20Gxn4

“I was spinning, the ball dropped over my shoulder and I just tried to get something on it. There wasn’t a great deal of power. It was all technique. I saw it going in and fell to my knees.” Platt recalled, as per the Express.

“Everything was intuitive, the way I met and hit the ball and then dropping to my knees. Instinct just took over. I’d never ever dropped to my knees after scoring before, I don’t know why I did.

“But when you score a goal like that you just go outside yourself for a bit, everything is surreal. The adrenaline surge is so great it’s as if I really was in a different place, a different world.”

Salvatore ‘Toto’ Schillaci was arguably the player who defined Italia ’90.

The forward began the 1990 World Cup with just one cap and on the Italy bench. He ended it as winner of the Golden Boot and Golden Ball awards, beating Lothar Matthaus and Diego Maradona to the latter prize.

It was a sensational success story for Schillaci, who had spent much of his career up until that point in Italy’s lower divisions. He scored six goals as the Azzurri reached the last four on home soil, with the pick of the bunch this effort in a 2-0 win against Uruguay.

Remarkably, Schillaci scored just seven goals in 16 appearances for Italy – six of which came at the 1990 World Cup.

“Not even a madman could ever have imagined what was going to happen to me,” Schillaci later reflected.

“There are periods in the life of a football player when you can do anything. For me, this state of grace coincided with the World Cup. Somebody up there decided that I should become the hero of Italia 90.”

After back-to-back defeats in the previous two finals, West Germany were crowned world champions at Italia ’90.

Lothar Matthaus was the driving force of the German’s success, scoring four goals in a string of performances that later saw the midfielder named as winner of the Ballon d’Or.

Matthaus was a marauding presence during a 5-1 thrashing of a talented Yugoslavia side in the group stage, scoring twice including this wonderfully hit effort after a surge from inside his own half.

Sometimes the beauty of a goal is in its creation.

Argentina and Brazil met in a clash of the great rivals at Italia ’90, a Superclásico de las Américas in the last 16.

Brazil were the better side and missed a host of chances, before a familiar face inspired reigning world champions Argentina. Diego Maradona did what Diego Maradona often did, evading and side-stepping opposition challenges with captivating ease.

Five Brazilian defenders failed to stop Maradona in his tracks, before the world’s finest footballer slipped a pass into Caniggia to send La Albiceleste onwards in the tournament.

Roberto Baggio had began the 1990 World Cup on the bench, with Italy boss Azeglio Vicini ignoring calls to throw in a talent who had caused riots on the streets of Florence after leaving Fiorentina for Juventus that summer.

After a watching brief in the opening fixtures, Baggio was handed a start for the final group fixture against Czechoslovakia. Italy were already through but had underwhelmed in their first two games, perhaps the perfect platform of Baggio to play without shackles.

What followed was an incredible individual goal, as Baggio embarked on a merry dance towards the opposition goal. A one-two with Giuseppe Giannini sent Baggio scampering away, bounding across the pitch in that familiar graceful style. After evading a late lunge from Ivan Hasek, he bore down on the penalty area.

Then came the snake-hipped shimmy. It was subtle, but enough. Enough to spin the retreating Miroslav Kadlec and provided Baggio with space to slam past the goalkeeper.