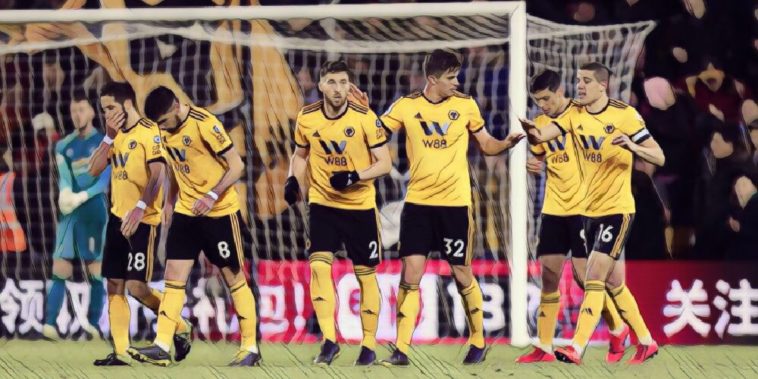 Manchester United’s chances of finishing in the top four were dealt a hammer blow tonight, as Ole Gunnar Solskjaer’s men slipped to a 2-1 defeat to an impressive Wolves side at Molineux.

In an entertaining encounter, a comical own goal by Chris Smalling would hand victory to Nuno Espirito Santo’s men, against a Manchester United side that had to play more than half an hour with 1o men after captain Ashley Young was given his marching orders for a second bookable offence. Let’s see how the player’s rated…

Can’t be faulted for United’s goal and made one excellent second-half save from a powerful McTominay diving header.

Another solid display from the Englishman, who is revelling in a Wolves backline that is greater than the sum of its parts.

A little slow to get out to McTominay for United’s goal, although he won plenty of aerial battles against Lukaku and carried the ball out well from the back.

Not able to get into the game as much as we have come to expect due to the presence of an in-form Luke Shaw, but still but in a huge shift for his team down the right flank.

Worked tirelessly in the centre of the park.

A classy operator who always seem to take the right option on the ball and plays with a maturity that belies his 22 years.

Uses his experience and technical ability to act as a real calming influence on this Wolves side.

Solid in defence and bright when he got on the ball in attacking areas.

Another hugely impressive display by the Mexican forward. His through ball for Jota’s equaliser showed his class and in terms of hold up and link play, there are few better strikers in the Premier League.

Took his goal well and was a constant menace to the United’s defence when he had the ball at his feet.

The Portuguese attacker’s pace caused plenty of problems and was unlucky to hit the bar when through on goal late on.

Solid, tidy and uncompromising, cos that’s what Jonny does baby.

It was only a few weeks ago that Gary Neville’s claims that De Gea’s ongoing contract talks were affecting his form were scoffed a by many. However, those claims looked more realistic tonight after a series of loose moments culminated in the Spaniard’s pathetic part in Wolves comical winner.

Looked shaky throughout and was sent off in the 57th minute after being shown a second yellow for a lunge on Jota, in all honesty, he had been lucky to escape a booking in the first period for tugging the same player back when Wolves seemed to be away on the counter.

Reasonably solid until the clusterf*ck that resulted in him scoring the own goal that handed Wolves the win, lost his head after that.

Lost far too many of his individual duels with the impressive Jimenez.

Did ok on the right of midfield, but the youngster is a fullback by trade and looks a little lost when collecting the ball with his back to goal.

United’s best player by a country mile, with the academy graduate scoring his first senior goal via a decent strike from just outside the box. Rather surprisingly the Scotland international normally known for his defensive work looked his sides best chance of scoring throughout.

A bright start was quickly undone by sloppiness in possession that resulted in Wolves equaliser. Still looks way short of being able to compete in the Premier League on a regular basis.

This was the France international’s second lacklustre performance for United in a row since he lifted up his skirt and winked at Real Madrid – something that will no doubt be latched upon by his critics.

Carried his recent excellent form into tonight’s game, although he did pick up a costly booking that will see him miss United’s next two Premier League fixtures against West Ham and Everton.

Clearly lacking the sharpness that was so evident in his game before his recent injury struggles.

Missed a couple of decent chances and his movement was too often static.

Where was Phil Jones when Manchester United score a comedic own goal to lose a crucial game? Yep, you guessed right in the thick of it, gurning his face off!

Unable to get into the game after replacing Lukaku as the central striker.