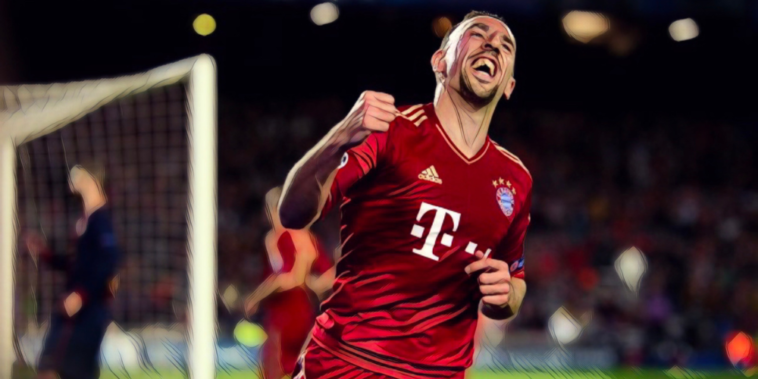 Franck Ribery stood shoulder to shoulder with Cristiano Ronaldo and Lionel Messi in 2013, a trio of talents regarded as the world’s finest footballers.

For most players a place alongside the all-time greats at the Ballon d’Or ceremony would represent a career high, but for Ribery this was a night of disappointment.

Having been the creative force of European football’s best side in Bayern Munich, this was the evening in which Ribery finished third in the voting, having expected to be crowned the planet’s premier player.

That the Ballon d’Or vote still rankles with the Frenchman is a testament to the levels he reached, during a career in which he found a home in Bavaria and shone in the most dominant team of the Bundesliga era.

Ribery’s road to the top of the game had been a difficult one. As a child he was involved in a serious car accident, one which left him with permanent facial scarring. The teasing and taunts were tough, but helped instil a mentality that propelled him to the summit of his profession.

“People would say: ‘Look what he has on his face, look at his head. What is this scar? It’s so ugly.’ Wherever I went, people would look at me,” he recounted to Canal + sport.

“And not because I was a good person or because my name is Franck or was a good footballer, but because of the scar. They gave me character and this strength. Because, when you are a child and you have a scar like this, it’s not easy. The way people see you, the comments – my family suffered for this.”

Ribery was born in Boulogne-sur-Mer, where the first step on a scenic route to Europe’s elite was at local amateur side Conti Boulogne. He joined the ranks of Lille in his first taste of a professional set-up, but was released as a teenager due to his size and academic difficulties.

He moved to hometown club Boulogne and made his senior debut at just 17, before a series of short stops included single season spells at Alès, Brest and Metz. Galatasaray then took a chance on the winger, but a first venture abroad failed to last.

Ribery began brightly in Istanbul, showing signs of the fleet footwork that would later define his game, but his time in Turkey ended in acrimonious fashion. After turning an initial loan deal into a permanent move, he decided to terminate his contract due to unpaid wages.

Having agreed a deal to return to France with Marseille, the result was a messy divorce and a long legal case, one which eventually sided in Ribery’s favour.

His return to France accelerated his ascent. Ribery’s first campaign ended with him voted Ligue 1 Young Player of the Season, before forming part of the France squad that reached the 2006 World Cup final, where he featured alongside Les Bleus legends in Zinedine Zidane and Thierry Henry.

Two seasons at the Stade Vélodrome were enough to attract significant interest and in the summer of 2007 he completed a club-record €25 million transfer to Bayern Munich.

Handed the number seven shirt vacated by retiring fan favourite Mehmet Scholl, expectations were high for the recently-crowned French Player of the Year, but his impact was instant.

Ribery ended his maiden campaign named as Germany’s Footballer of the Year, having had a direct hand in 39 goals during Bayern’s domestic double.

Ribery’s explosive acceleration and penetrative runs had made him the division’s most exciting talent, where he operated primarily from the left and was granted a licence to burst infield and create goalscoring openings.

Bayern ended Ribery’s second season without silverware and in search of reinforcements secured the signing of Arjen Robben from Real Madrid.

It would be the start of a partnership that defined the decade.

In their first fixture together the two came off the bench to orchestrate an emphatic win over defending champions Wolfsburg, with Ribery twice teeing up his teammate for goals.

The second was a goal which encapsulated the best of the dovetailing duo, a brilliant breakaway at pace in which Ribery raced away before squaring to the debutant.

In tandem the two wingers were a frightening force, making the trip to Bavaria one all full-backs dreaded.

Bayern again won a domestic double in 2009/10, with Robben this time claiming the Footballer of the Year honours. Defeat to Inter Milan in the Champions League final was all that prevented treble success.

Two seasons later and Ribery suffered further European heartache. Bayern reached another Champions League final, this time on home soil at the Allianz Arena. The first finalists to have home advantage since 1984, a shootout defeat to Chelsea was a difficult pill to swallow.

Bayern, however, bounced back and it was Ribery who catalysed their charge. Having mastered the role of an inverted winger, he was at his devastating best. Freed from the shackles of the touchline, he demanded involvement and responded with invention.

His short bursts from a static start left defenders for dead as he accelerated away from challenges and carved out chances.

When @FranckRibery did THIS for Bayern ⚡️😍

Ribery scored 11 goals and provided 23 assists in all competitions, as Jupp Heynckes’s team reclaimed the Bundesliga from Borussia Dortmund and added the DFB-Pokal to their haul. In Europe, Bayern’s brand of exhilarating football illuminated the Champions League’s knockout rounds, thrashing Juventus and Barcelona without conceding a goal to reach another final.

In a tense final with compatriots Dortmund a late goal from Robben, set up by Ribery’s back-heel, crowned the German giants champions of Europe at Wembley.

“We finished second in the Bundesliga, we lost in the German Cup final and we lost against Chelsea at home in the Champions League final,” Ribery told DW on the club’s 2011/12 campaign.

“It was brutal. The Champions League final was particularly a big blow. That hurt. I don’t know how we found the strength to come back after the off-season.

“But a year later we won the treble. Everyone knows that was our best season. And I was the best player in Europe, it was fantastic.”

Ribery won the UEFA Men’s Player of the Year Award, having been the best player in the best side in Europe. The Ballon d’Or evaded his clutches however, as he finished third behind Ronaldo and Messi in a tight vote, one which he believes he should have won.

😎 One part of the greatest wing partnership in modern history…

“More than a disappointment, it’s the biggest injustice of my career,” Ribéry said to L’Equipe, as per Sport Witness. “Not only for me, for many people. I was on top and I finished 3rd. I had nothing to envy Ronaldo or Messi that year. I say it in all humility because it is the truth.

“Personally, I think that myself and Robben at some point were better than Cristiano Ronaldo and Lionel Messi,” Ribery later told Tribuna.

“But they played in El Clasico, so that worked to their advantage as the audience watched them more.”

Ribery remained at Bayern for a further six seasons, with his trophy haul increasing season upon season as the Bavarians dominated the Bundesliga landscape. Fittingly, after 425 appearances, he called time on his career with the club in the same summer as long-time accomplice Robben.

“It’s beautiful that people call us ‘Robbery,’ it’s a great name,” he said to DW.

“We immediately had a good feeling together, on and off the pitch. And we’ve won everything together. He’s a true professional, he’s a great role model for our youngsters.

“People will never forget what we’ve done together. It will remain with us our whole lives.”

While the success flowed at club level, Ribery’ international career was one littered with disappointment. He earned 84 caps for France and scored 16 goals, but his time with the national team largely coincided with a chaotic period for Les Bleus, one muddled in poor tournaments and off-field conflicts.

Approaching his 40th birthday, the winger is still competing in Italian football. Having joined Fiorentina upon leaving Bayern, his love for the game has continued an illustrious career at Salernitana, who he helped to a miraculous escape from relegation last season.

The legs might not be as quick as they once were, but the speed of thought remains for one of the greatest wingers of his generation, enjoying a late sojourn in Serie A.

It was in Munich, however, where he found his home. During his time in Germany, he won nine Bundesliga titles, the DFB-Pokal on six occasions and the Champions League, in addition to being voted as Europe’s finest footballer in 2013.

Few full-backs who faced him were ever given an easy evening, a supreme talent that was forged in France but made in Munich.