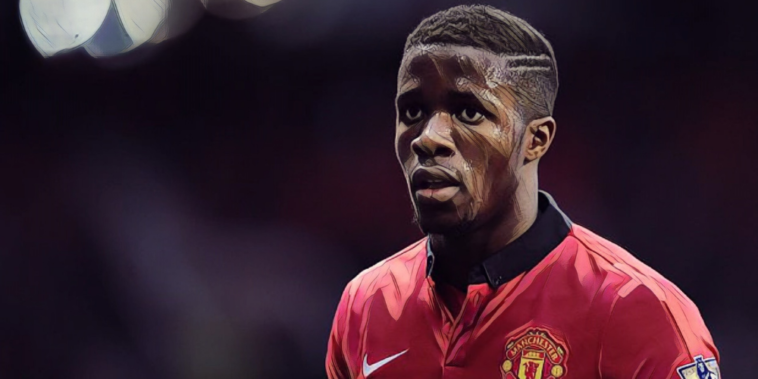 Wilfried Zaha has revealed how he was ‘set up to fail’ by Louis van Gaal during the winger’s disappointing spell at Manchester United.

Zaha became Sir Alex Ferguson’s final signing as manager of the Red Devils but after spending the remainder of the 2012/13 season with Crystal Palace arrived at the club following Ferguson’s retirement and the appointment of David Moyes.

The winger struggled to make an impression and made just four appearances across all competitions, failing to win favour with Moyes or successor Louis van Gaal before making a permanent return to Crystal Palace.

Zaha spent time on loan with Cardiff during the 2013/14 season before returning for pre-season in 2014, where the Ivory Coast international has revealed he was handed an ultimatum by new manager Van Gaal.

The Dutchman was keen to use a system without natural wingers and informed Zaha he must thrive either as a wing-back or striker to make the grade, with the star admitting he was ‘set up to fail’ after opening up on his struggles at Old Trafford.

‘Right place at the wrong time, really. I look back and think there’s nothing else I could have really done,” Zaha told the Judy Podcast.

‘That whole period, people ask me if I regret it but no. It’s a learning curve, it made me so much stronger mentally, I met some amazing players, some amazing people over there. I’m glad I went there and it made me who I am now.

‘I tried to go back on loan to Palace before and David Moyes wouldn’t let me. I don’t know for what reason, and they just shipped me off to Cardiff. I went there and I was a shadow of myself, I wasn’t speaking to anyone. The player that I am now, I was not myself at all.

‘So I went there, added relegation on my CV, went back to United, it was van Gaal by then. And when he came back off the World Cup where he played Robin van Persie and Robben up front, so basically he gave me two options – you’re either a wing back or a striker.

‘Those positions are positions I’ve never played before. So it’s like I’m being set up to fail here. This is off of coming back from David Moyes, and I’m shattered from just how everything worked out. I go back and I get that, either a striker or a wing back. I can’t do either.

‘Now, I can vary my game with years of playing you get experience. Back then I wasn’t good with my back to goal, I didn’t have that awareness, I’m not good with that. I remember I had to play striker.

‘On pre-season we’re playing Inter Milan, I had to play against Vidic, we played against Real, I’m playing against Pepe and Ramos up front, thinking this guy’s boying me. It’s mad, I’m being thrown in the deep end against the maddest teams.’

Zaha has revealed how the club’s management made a swift decision on his future following one training session in pre-season, admitting Van Gaal was unconvinced by his talents and revealing how his time on the fringes left to him mentally struggling.

‘I remember I came back that year – I don’t think I’ve said this before – they gave me one more session for them to decide [if you’re going to stay or not?] yeah. Van Gaal and Giggs was his assistant.” Zaha continued.

‘These are things I don’t even argue with. That’s why I say it made me who I am now, my confidence and just how I am. It just changed me, all those things I went through.

‘My brother was up there at first with his family, but then he had to go back so I was just by myself throughout the whole David Moyes period, that’s when I just went through depression and all sorts. I couldn’t cook so I wasn’t even eating proper.

‘That training session, Rooney told me I trained well. Went back in and went to see them and they were just like, “we don’t think you’re good enough – you can go”. This was pre-season. I didn’t [argue it]. I was so relieved, thank you for telling me straight and letting me go out on loan so I can restart my career.’