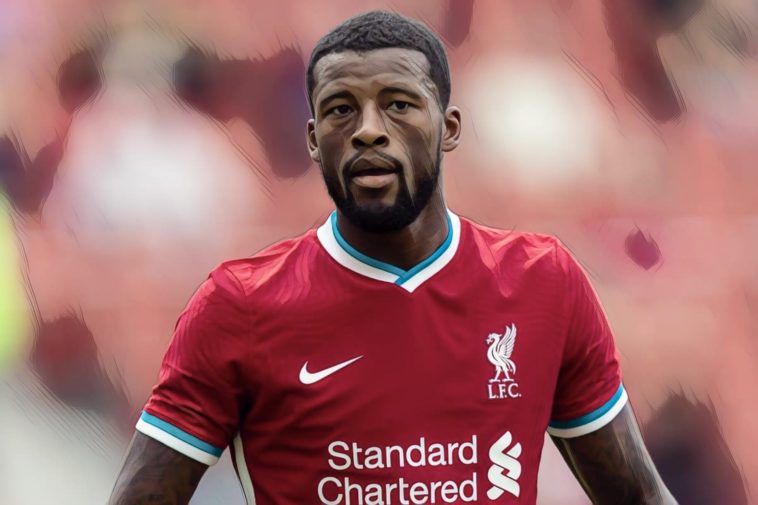 Georginio Wijnladum has refused to comment on his contract situation as speculation continues to surround the future of the Liverpool midfielder.

Wijnaldum has entered the final year of his contract on Merseyside and will be free to discuss a pre-contract agreement with foreign sides from next month, with Barcelona reportedly keen to secure the signing of the Dutchman on a free transfer.

The Netherlands international has been a key figure in the Reds’ recent success and has played in every one of their Premier League fixtures so far this season, scoring a brilliant goal in the club’s 4-0 win over Wolves on Sunday evening.

Following the clash the midfielder was once again asked on his future beyond the end of the season, though refused to discuss his contract situation and placed the emphasis on Liverpool to address the uncertainty.

“I already said in my previous interview, I don’t speak about my contract situation,” the Dutchman told Amazon Prime Video.

“I speak about the games, the performance, football, and the club should speak about my contract.”

Wijnaldum has been a vital cog in the Reds’ engine room throughout his four years at Liverpool and opened up on his ‘connection’ with the club’s fans, though remained coy over where his football will be played from next season.

“Of course there’s a connection, there was already a connection from the first moment that I came here. The supporters supported me a lot,” he continued.

Jurgen Klopp has previously spoke of his desire for Wijnaldum to remain with the club beyond the end of the season, and expressed confidence that the Dutchman will sign a new deal at Anfield.

Asked if he thinks Wijnaldum will stay, he said: “I hope so, to be honest!”

Paul Scholes also discussed the player’s future after watching Liverpool’s impressive win over Wolves last night, with the former Manchester United midfielder questioning why Wijnaldum would want to leave a side capable of winning further major honours in the coming seasons.

“Why would he want to leave, the way they (Liverpool) are playing with attacking football every week?

“He was linked to Barcelona but it never came off, but why would you want to leave? I think they’ll win the league again and it’s an exciting team for him to play in.

“He’s a Barcelona style player and he could fit into Barcelona’s system and there’s that Dutch connection is going to be big at Barcelona. Especially with Koeman there or for how much longer we don’t know because they’re struggling, but why would you leave such an exciting team?”

Read – Racism isn’t just a Millwall problem, it goes far deeper than that