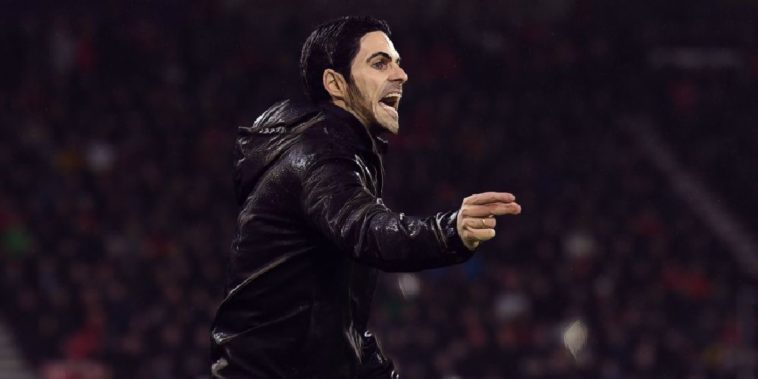 Arsenal manager Mikel Arteta’s recent admission that his side could do nothing during the next transfer window would undoubtedly have received a lukewarm reception in some quarters of the Gunner’s fan base.

The North London club has endured another frustrating season with the likely prospect of their Champions League exile being extended, baring a dramatic end of season run to propel them up the table.

With this is in mind, it is easy to see why fans would urge serious and ambitious investment to correct the club’s meandering course. However, such a heavy-handed approach may actually have a long-term detrimental effect on one of the few bright lights of the Gunner’s shabby season.

Arsenal have been out of the common equation for the game’s biggest honours for almost a decade now and their post-Arsene Wenger transition has proven more turbulent than most would have liked. Despite Arteta restoring some good cheer at the Emirates during an eight-game unbeaten run in the league prior to the COVID-19 hiatus, a toothless Europa League exit to Olympiacos in March, exposed once again, the deep fault lines that run below the surface.

As so often is the case, supporters will expect the club’s hierarchy to react with a cascade of high-profile transfers to make their side competitive once again. However, one of the pitfalls that this approach brings is difficulty with integrating high profile new arrivals into the first team.

New signings can often struggle with the demands of the Premier League and create selection headaches if their form waivers during the settling-in period. They can also block the paths of youngsters trying to make their transition through to the first team and send out a message that their game time is going to be significantly reduced.

Arteta has already handed considerable minutes to highly-rated young stars during his brief tenure in the hot seat. So far in 2019/20 Joe Willock, Bukayo Saka, Reiss Nelson and Gabriel Martinelli have added a much-needed injection of positivity to the narrative coming out of the Emirates. Each youngster has shown hunger and a crucial lack of fear culminating in some big performances for Arteta in the weeks before the cessation of hostilities.

Bukayo Saka now has 12 goals/assists in 18 starts this season, with 9 of those starts at LB ?

Martinelli and Saka were outstanding during the breathless 2-2 draw with Chelsea in January, whilst Eddie Nketiah has impressed since his return from Leeds United. Brazilian forward Martinelli has notched an impressive 10 goals in 26 games and looks a potent weapon in attack with his pace and aggression.

While the youngsters have each shown understandable rawness during the course of the season, their efforts and desire have been there for all to see. In stark comparison, senior pros like Mesut Ozil, Granit Xhaka and David Luiz have not always shown the required attitude or form to help drag Arsenal up the table.

However, it would be more than just morally indecent to hurl a plethora of new signings in the way of the club’s cohort of emerging young talent.

In Arteta, the club has a coach possessing sufficient pedigree to help talented youngsters reach the next level in their fledgeling careers. If they were to go after more established big names this summer, they could end up closing themselves off to the emerging market of top young players who may well flourish in North London under the new regime.

Gabriel Martinelli: ‘I want to win the Champions League & lots of titles to make Arsenal fans very happy. They deserve the best, as do the staff. I’d like to give back to the club after everything they’ve done for me so far & become a Gunners legend as a result’. pic.twitter.com/D2wrpq4R7H

Arsenal could follow a similar path to the likes of Borussia Dortmund by not only investing in academy graduates but also focusing on more youthful transfer targets, as opposed to marquee arrivals for blockbuster prices. We have already seen evidence of a shift towards this with the acquisition of Martinelli from Brazilian outfit Ituano, as well as 19-year-old French defender William Saliba.

While they may still have to spend a considerable fee to secure a star prospect, as was the case with Saliba, it would at least serve as an investment in the club’s future as opposed to a short-term fix option that comes with a player entering his late twenties or early thirties.

In forsaking the populist marquee option, Arsenal could evolve into a beacon for the acquisition and nurturing of top young talent from the continent and beyond if they have they can follow on from their encouraging trends this season.

Of course, at a club like Arsenal, ambition must remain, and it would naive to think that the youngster’s name dropped in this article, will all go on to help steer the Gunners to a return to top honours and a restoration of Champions League football without some outside help.

The right sprinkle of investment is always required and it is important that the club must get the balance right. Too much expectation and over-playing the kids can be fatal. Furthermore, the right experienced heads in the dressing room are often crucial in shaping youngsters coming through the ranks.

Ultimately, Arsenal do not want to be seen solely as a finishing school for talent and a stepping stone to bigger clubs. Some prudence therefore, must remain. While they may not be able to entice the best in the business during their Champions League hiatus, they should continue to make at least some ambitious statements with their recruitment. Getting the balance right, between signing good quality experienced players and not pulling up the drawbridge for youngsters could be crucial for Arteta.

A certain Frenchman once got that equilibrium so perfectly balanced that he changed football forever in this country.

The gravity of that legacy remains at the Emirates but Arsenal’s future can be forged with faith in the next generation at its core once again. Whatever route they go on to take, it would a shame to see the club discard their current crop of youngsters and throw caution to the short-term fix of older pros, when so many have already forged a reputation for underachievement and big wages in north London.

Arteta’s bold declaration that he is prepared to do nothing during the next transfer window hints at his strong faith in the youngsters at his disposal. If he does opt to back this up by avoiding a marquee recruitment drive focused on youngsters this summer then it could just pay dividends in the long run for the Gunners.

Read Also – Moments that made the Premier League: Wenger stays silent as a football dynasty is founded