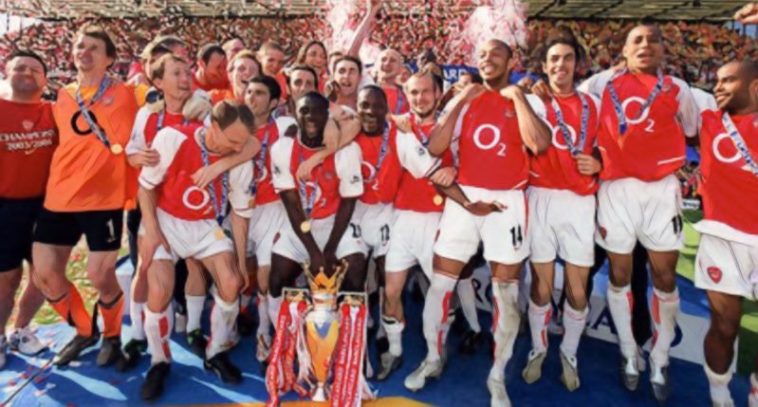 For all of Liverpool’s dominance this season, a 3-0 loss to Watford spoiled their quest to repeat the heroics of Arsenal during the 2003/04 season in which they went unbeaten throughout the entire season.

Arsene Wenger assembled a squad with some of the finest players to ever grace the Premier League and produced a team that – by virtue of their results and playing style – captured the imagination of English football in a way no other team had done.

Arsenal lined-up as a 4-4-2, but with wide midfielders Robert Pires and Freddy Ljungberg pushing high and Dennis Bergkamp dropping deeper, the team could resemble a more modern 4-2-3-1 in the attacking phase.

Defensively, Arsenal did not press as concertedly as most sides in the modern game, but their superb strike force of Bergkamp and Thierry Henry would work as a pair to close down opposition centre-backs, whilst the wide midfielders would push up to press periodically.

The back four would keep its shape with at least one central midfielder – either Gilberto Silva or Patrick Vieira – patrolling the space in front of them. The pace of the Arsenal back four enabled them to play an effective offside trap and deal with pacey forwards, whilst Kolo Toure’s passing range enabled the Gunners to rapidly initiate counter-attacks once the ball was won back.

In possession, the team was predicated on intelligent movement to disrupt opposition defences and produce mesmeric attacking sequences. Henry peeling wide into the left half-space. Bergkamp dropping off. Toure striding forward from centre-back. Vieira pushing up to support the forward line. By encouraging this slew of movement, Wenger enabled his side to find space in between the lines and progress the ball at rapacious speed.

In Ashley Cole and Lauren, Arsenal possessed perhaps the first pair of dynamic attacking footballs in the Premier League era. Both converted from more advanced positions, they bombed forward to provide width down their respective flanks, allowing Ljungberg and Pires to drift infield and fluidly interchange positions with the strikers and onrushing central midfielders. Both Cole and Lauren were crucial in Arsenal’s fluid attacking setup.

Another key aspect of this attacking approach was the intuitive intelligence and ability of the players. Positional interchanges and specific movements can be rehearsed and trained, but to achieve the productivity of the Arsenal attacking line, a team must have players with an inherent understanding of space and the capacity to exploit it. With the likes of Ljungberg, Bergkamp, Pires, and most notably Henry, Arsenal possessed players with the necessary movement, pace, and skill to flourish under Wenger’s tactical setup.

That Arsenal acquired such players was no accident. Wenger’s extensive and unparalleled knowledge of overseas markets enabled him to acquire supremely talented players such as Henry and Vieira at a fraction of their true value. It demonstrated not only his robust understanding of the game beyond England but also, as Amy Lawrence wrote in the Guardian in 2006, his “preference for creating and moulding a great player rather than buying one ready-made.” Wenger’s knowledge gave Arsenal a unique competitive advantage during the early 2000s and it proved decisive in their unbeaten run.

The Invincible’s season was a pure manifestation of Wenger’s footballing philosophy. His recruitment, innovative coaching changes, and tactics fueled Arsenal’s success by creating a squad full of dynamism, speed, and imagination. Arsenal may be behind the pace in the Premier League at present, but history will never forget their Invincible’s team.