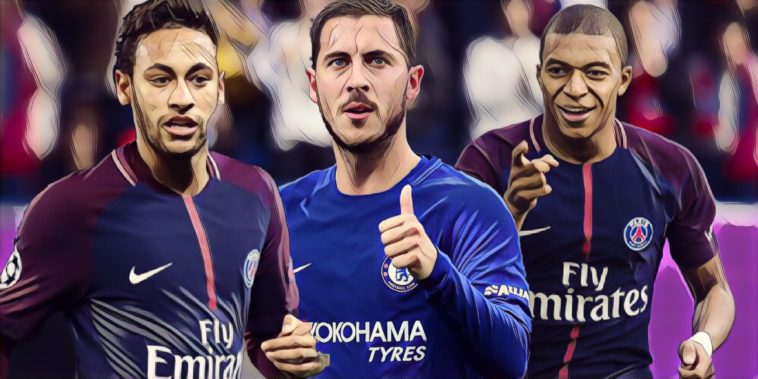 Many of Europe’s top clubs have endured a disappointing twelve months, none more so than Real Madrid.

Los Blancos crashed out of the UEFA Champions League in the Round of 16, and the fans are unlikely to accept another campaign of mediocrity.

Meanwhile, PSG were also eliminated at the same stage of the competition, with the Parisians being beaten at the Parc des Princes by Manchester United, despite holding a two-goal advantage going into the second leg.

Both teams will be keen to progress further next year, and are highly likely to flex their financial muscles once the summer transfer window opens for business. With many top players having already been identified as potential targets, who will spend the most cash in 2019?

Check out all the latest transfer gossip.

Not only did Real Madrid fail to defend their UEFA Champions League title, but Los Blancos also lost successive El Classicos this season. The games against Barcelona are always intense and are regarded as one of football’s greatest grudge matches but the 13-time European champions were beaten 6-1 on aggregate this time around.

Zinedine Zidane has returned to the club and, after citing “the need for a change” when departing in June 2018, this would indicate that he has been promised a significant transfer budget and a mass overhaul of his aging squad is highly likely.

They’ve been heavily linked to Chelsea’s Eden Hazard over the past couple of months, and it wouldn’t be a surprise to see the Belgian arrive at Santiago Bernabeu this summer. Paul Pogba is another name who is continuously linked with a move to the Spanish capital, whilst Neymar could also make a surprise return to La Liga next season.

PSG may also have a vast budget this summer and, if Neymar does decide to leave the Parc des Princes, Thomas Tuchel could be given significant cash to spend. At the time of writing, the club have been far less vocal about their plans, although Antoine Griezmann is believed to be their number one target, should their Brazilian talisman leave for pastures new.

The Ligue 1-behemoths may also have to offload a couple of players in order to satisfy the financial fair play rules so may not be able to strengthen every area on the field. The club, who are owned by Qatar Sports Investments are constantly juggling their finances after spending an eye-watering €222million on Neymar, prior to completing a costly loan deal for Monaco’s Kylian Mbappe.

With endless funds available, the club generally does not have to worry about income but, despite this, it still remains a difficult juggling act. There are many teams who frequently worry about spending beyond their means, and will undoubtedly look enviously on the Parisian’s wealth.

However, as in any walk of life, it is vital to strike the right balance. The question of being set for life vs Cash4life is one of life’s most intriguing questions, and many annuity games now give winners the chance to make this decision.

Although having access to endless pots of cash sounds like an enticing proposition, it can sometimes result in misuse or perhaps even ill-advised purchases. This could feasibly also apply to PSG, and they’ve recently demonstrated that having inexhaustible funds doesn’t necessarily constitute immediate success in football. It’s how you spend it that counts and those who have far less financial power often make more astute signings as a result.

With Zinedine Zidane back in the dugout, Real Madrid are likely to be this summer’s biggest spenders. The Santiago Bernabeu club will wish to draw a line under their underwhelming 2018-19 campaign, and a much-changed starting XI is expected come August.

The Frenchman will have been promised significant spending power this year, and the club is likely to have already identified the majority of its transfer targets. It could be an important few months for each of these two European heavyweights but, following a trophyless campaign, Real Madrid are expected to outspend the Parisians this summer.