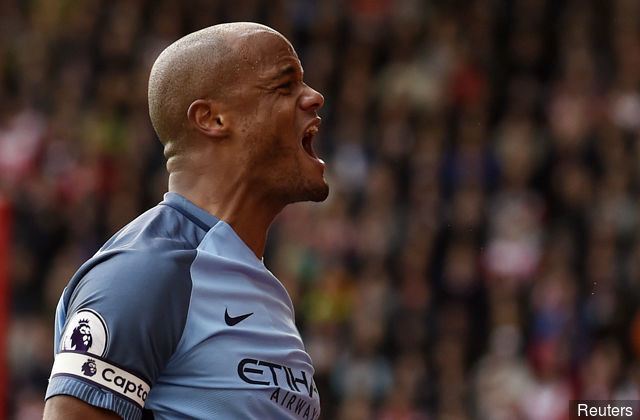 Throughout April, Vincent Kompany is enjoying what feels like the longest run in City’s starting eleven in a couple of years. The Belgian captain has suffered serious injury problems consistently since the 2014/15 season, largely keeping him from organizing and leading City’s defensive effort week in, week out. Unsurprisingly, the rest of City’s defense has looked a shambles often in his absence. So what exactly does Vinny bring to the table that is so irreplaceable?

Most obviously, Kompany provides world class defending, both technically and mentally. One ultimate Kompany moment for myself personally was against Barcelona in the 2013/14 season, when the Captain ventured into the middle third and pulled out a magnificent standing-hooking tackle on a speeding Leo Messi, breaking down the attack and putting City back on the ball.  The tackle was an epitomization of all Kompany’s greatest technical abilities—timing, aggression, quick thinking and pace.

A defender who is able to pull off such a tackle is a truly specially talented one, and City have failed to bring in another player who even approaches Kompany in this regard.

Beyond this, there is something about Kompany’s commanding presence that improves the defence around him. When Kompany is on the pitch, City’s back line is more stable and more unified. Knowing the class backing you up is comforting for the fullbacks and gives them more freedom to be more aggressive on both offense and defence, allowing City more time on the ball.

Kompany also has a potent offensive side to his game in a number of aspects. Most directly, Kompany is always a threat from corners and free kicks with his towering height and tremendous athleticism. Again and again he proves that he is as good at with his head in the opposition box as he is his own.

Quickly coming to mind are the two goals at the start of the 2015/16 campaign against West Brom and Chelsea, both of which he attacked with power and masterfully directed to a corner of the goal.

Kompany also plays an important role in City’s build up play. Supremely good on the ball, he takes pressure off other defenders in providing a safe, low-risk passing option in the middle of the defending third. Such a presence is paramount for Guardiola’s thorough, possession-based offensive strategy.

The Captain’s Role in Team Morale

These are all integral aspects of Vinny’s game that have proved hugely important for City time and time again. But the most special trait the captain possesses is his love for the club and his desire to win for City.

In the dying moments of a match, Kompany never lacks the workrate to chase down a ball heading for the endline to clear it out to the sideline. When one of the Premier League’s countless pacey wingers is charging at him on a counter, he always shows the aggression to put in an accurate and decisive tackle.

Kompany’s passion not only works wonders for his own game, it also boosts the morale of the entire side. In the midst of a long season, playing two or even three games a week can make football dreary, even for a side with the level of depth that City has.

A Captain whose zeal never wanes can provide the necessary enthusiastic presence required to push through the moments of a season that tests a side’s mental fortitude.

Here’s to you, Vincent Kompany, City loves you more than you will ever know!