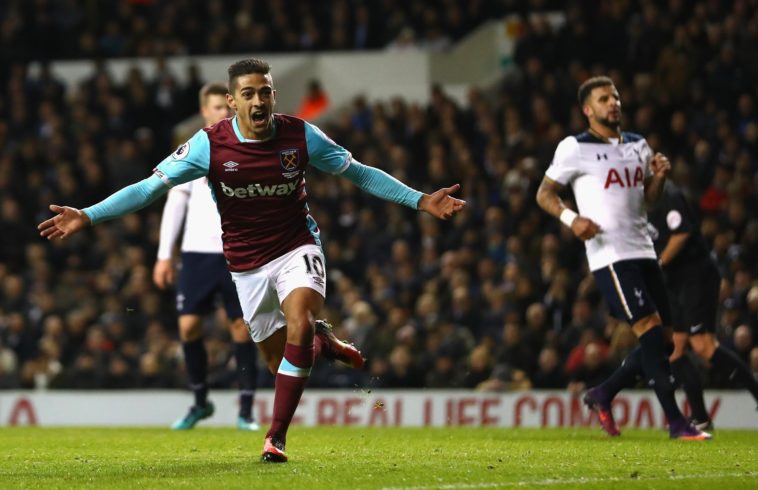 West Ham yet again dealt a hefty blow to Tottenham’s Premier League ambitions with a deserved 1-0 victory at the London Stadium last night.

Spurs were seeking a tenth straight league win and three points last night would have put them within touching distance of leaders Chelsea.

Defeat means the title race could be over before Spurs play again, if Chelsea win their next two games.

For the Hammers, the victory over their neighbours moves them on to 42 points, mathematically clear of relegation and up to ninth – for Saturday morning at least – in the league table.

West Ham have been impressive against Spurs in recent times and they have now won three of their last four home Premier League games against them.

Tottenham will have travelled the short distance to the London Stadium last night hoping that history would not repeat itself and that they could reverse their recent poor form away at West Ham.

They must be sick and tired of playing the Hammers when they have everything to play for, and the East Londoners were out to spoil the party.

Last season, when Spurs were in a similar position, chasing league leaders Leicester City, they came unstuck at the Boleyn Ground, losing a crucial fixture 1-0.

For the last game of the 2005-06 season, Tottenham did literally arrive at the Boleyn Ground sick. Some dodgy pasta sauce the night before the game was apparently to blame for a morning vomiting outbreak among the Spurs players

Consequently, needing only to match Arsenal’s result against Wigan to claim the last Champion’s League spot at their rivals’ expense, they lost 2-1.

The infamous lasagne-gate episode has gone down in London football folklore. Was the hotel pasta chef a West Ham fan? Who knows!

Night games at West Ham’s former home were usually atmospheric occasions, something that has sadly been missing at the new ground.

Last night’s fixture was different, as a noisy and expectant crowd made for a cracking atmosphere, one which ultimately drove the home side to victory.

Early exchanges in the first half were edgy and nervous as neither side could afford to concede a goal. Manuel Lanzini went close for the Hammers, and could have been awarded a penalty when he seemed to be upended by Spurs keeper Hugo Lloris.

At the other end, Spurs’ patient possession play saw them create a clear opening for Harry Kane, only for goalkeeper Adrian to make a superb save with his outstretched foot.

The resulting corner was headed towards goal by Eric Dier, only for Adrian to make yet another fine reaction save.

In the second half, the game’s pattern seemed to slowly change and the home side had more and more possession in dangerous areas as their confidence rose.

On 65 minutes, Sam Byram put a cross into the Spurs penalty area. Jonathan Calleri was on hand, but scuffed his shot, which fortuitously fell to Lanzini who lashed the ball into the net from five yards.

The Hammers had taken a 1-0 lead and the home fans were singing ‘Tottenham Hotspur it’s happening again’.

Indeed it was, as Spurs’ attacks began to lack conviction and only a Christian Eriksen 25-yard effort, which flew past the right-hand post, looked dangerous.

A couple of half chances may have resulted in the Hammers taking a 2-0 lead, but in the end West Ham saw out the final few minutes to seemingly ruin Spurs’ quest for a first title since 1961.