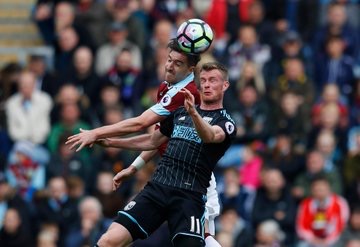 Burnley effectively secured their Premier League status for next season, by picking up a point against a spirited West Brom side.

Sam Vokes handed Burnley a 56th minute lead, but that was soon cancelled out by Salomon Rondon, who netted Albion’s first goal in six games.

Craig Dawson bundled home from a corner to complete the Baggies comeback, but the Clarets didn’t lie down, and Sam Vokes hit back to make sure Burnley hit the magical 40 point mark.

The first-half was a tentative affair, with neither side keen to come out and try and stamp their authority on the game.

The closest either side came to opening the scoring was when Sam Vokes got across his man at the front post to get on the end of a George Boyd cross, but his left footed volley was stopped smartly by Ben Foster.

Scott Arfield was then presented with a guilt-edge chance to break the deadlock. Ashley Barnes slipped Arfield through, but he dithered on the ball, which allowed James McClean to make a crucial block.

10 minutes into the first half, the deadlock was finally broken. Matt Lowton released Ashley Barnes into the area, who was brought down by Jake Livermore, with the linesman flagging for a penalty, but Mike Jones allowed play to go on and Barnes was quickest to his feet the roll the ball across the box for Vokes to tap into an empty net.

The goal seemed to kick West Brom into action, and they were level on 66 minutes through Salomon Rondon. The Venezuelan controlled McClean’s cross from the left, turned and fired into the corner, to score West Brom’s first Premier League goal since the 18th March.

Albion completed the comeback 12 minutes from time, when Chris Brunt’s in-swinging corner was met by Craig Dawson, unmarked six yards out, who powered his header home, via a deflection off Ashley Barnes.

The resilient Clarets wouldn’t lie down though, and hit back on 86 minutes, when Robbie Brady’s free-kick was headed home by Vokes, who beat Ben Foster to the ball and his header looped into an empty net.

Both sides pushed for a winner, but neither could find one, and in the end you could argue a draw was a fair result.

What a season it has been for Burnley. 40 points for the first time in their Premier League history, and barring a 20-goal swing in the last two games, safety is assured.

Sean Dyche has masterminded a remarkable season. Written off by everyone at the start of the season, the Clarets have stunned everyone and retained their Premier League status for the first time in the clubs’ history.

West Brom will be relatively satisfied with a point. They never really got going, but still ground-out a point, which all but secures a top flight finish for the Baggies.

Perhaps the most pleasing aspect of the game from an Albion point of view, was that their drought in front of goal is finally over, and they can go into the last three games of the season without that burdening on them.