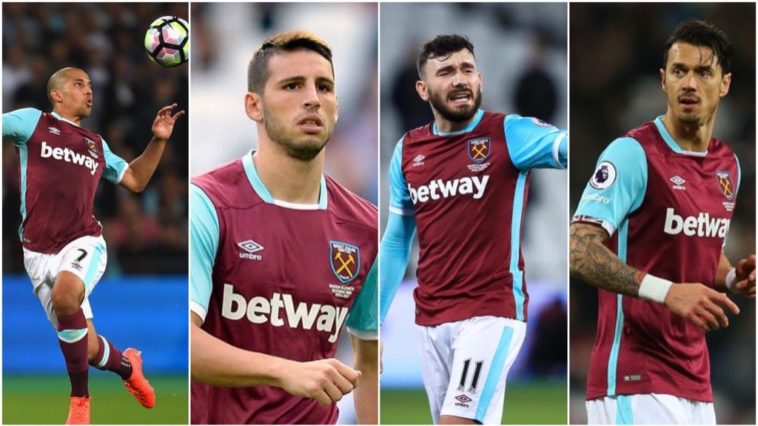 For those West Ham fans who attended Saturday’s home win over Swansea, the sense of relief that we had finally won a game was clearly evident.

Five straight Premier League defeats had even the most upbeat fans fearing the worst, as the club seemed to be slipping ever closer to the relegation trapdoor.

On Saturday, the sun was out and West Ham responded with a bright and energetic performance which was in stark contrast to the haphazard displays of late.

Even without the injured Winston Reid and Aaron Cresswell in defence, the Hammers shuffled the pack and put out a back four that looked assured and dealt comfortably with anything the Swans’ attack could muster.

However, watching the game one could not help notice that all of the recent signings have yet to make their mark and – to a man – put in below par performances. They are West Ham’s missing men.

Let’s start with the defence and our Portuguese international Jose Fonte. An £8 million signing in January from Southampton, he has yet to show his worth, as his displays so far have been far from impressive. Too slow at spotting danger, his tackling is inconsistent and going forward he’s not a threat in the opposition’s box from corners.

Fonte was not a direct replacement for James Tomkins, but selling the Academy graduate last summer to Crystal Palace for £12 million was a mistake. Tomkins is considerably younger than Fonte, so he will be around for a lot longer, and he has all the attributes that the Portuguese player seems to lack.

As well as being a dependable centre back, Tomkins filled in at right back during the last few seasons. He even chipped in with the odd goal. My personal favourite was the last-minute winner he got against Maltese side Birkirkara in last season’s Europa League.

The goal saved our blushes, as West Ham sneaked a 1-0 win over a very poor side. I wonder if Fonte will leave us with any memories of winning European goals? I very much doubt it.

In midfield, West Ham have replaced Dimitri Payet, statistically one of the best players in the world, with Robert Snodgrass. Was he even the best player at Hull City? Who knows?

Payet wanted to leave and there is no doubt that West Ham did the right thing by selling him in January. However, Snodgrass has been a real disappointment. No-one expected him to emulate the Frenchman, but most supporters hoped he would show the same form he produced earlier this season at Hull.

During the first half of this season, Snodgrass scored nine goals in 24 appearances for the Tigers. So far, since making his West Ham debut on 1 February against Manchester City, he has yet to score a single goal.

I may be being a little harsh on the Scottish international, because on Saturday, only a fine one-handed save by Lukasz Fabianski, denied him a goal. Snodgrass’s downward header was definitely going in, before Fabianski’s intervention.

Unfortunately, Snodgrass’s performances for West Ham, including Saturday’s game, have looked pedestrian at best. He seems to lack pace, which is an important asset for any wide midfield player. Instead of taking on an opposition player, Snodgrass all too often relies on an overlapping right back to do the running for him. This workhorse has in recent weeks been Sam Byram. All the evidence points to Snodgrass being another missing man who needs to find his Hull City form very quickly.

Sofiane Feghouli also plays a similar right sided role as Snodgrass. Since signing for West Ham in summer he has been one of many recent arrivals who have failed to find their feet.

Admittedly, Feghouli has scored three times this season, but mostly he fails to shoot when in a good position. A prime example of his failings happened against Swansea.

Feghouli came on as a second half substitute, and in the dying minutes he had a great chance to score a second West Ham goal to seal the victory. Running clear of the Swansea defence, with only one opposition player to beat on the edge of the box, Feghouli stopped running. Instead of taking on the defender or shooting, he attempted a through ball for Manuel Lanzini, which was never on.

Consequently, the move petered out. Feghouli’s pass ended up being an easy back-pass to the keeper. Last season, Payet or the on-loan Victor Moses would have been in that position. Bearing down on goal, neither of these two players would have made such a hash of this chance.

The Algerian is definitely another missing man and one I suspect that will never show his true potential at West Ham. A summer departure is on the cards for Feghouli.

Finally, let’s have a look at the forward line. This is a position West Ham have been trying desperately to reinforce for some time. With Andy Carroll often injured, and Diafro Sakho out for most of this season, the Hammers have been short of an out-and-out striker. Simone Zaza arrived on loan from Juventus in the summer and failed to make any impression and was then moved on during January.

Ironically, the only goal he scored at the London Stadium came in a pre-season 3-2 victory for the Italian champions, just before he signed for West Ham. Then, immediately after signing for Valencia in January, he scored a superb goal against Real Madrid. Zaza was most certainly a missing man for the Hammers.

This brings us to Jonathan Calleri, our final missing man. Signed on loan from Uruguay’s Deportivo Maldonado, the Argentinian forward arrived with an impressive CV.

Previously in 41 appearances for Boca Juniors, he had scored 16 goals, and before that he’d netted five goals in 28 outings for All Boys.

So far, during his brief career in London, Calleri has just one goal to his name, a rather fortunate effort during the Hammers 3-1 away win at Middlesbrough.

In his defence, Calleri has not had too many opportunities to shine. The 50 minutes he got against Swansea on Saturday, after he replaced the injured Michail Antonio, was the longest he’d played in any Premier League match.

He may not have scored against Swansea, but Calleri did show enough battling qualities, playing as a lone striker, to suggest that he may get more opportunities to play.

He won a couple of aerial duels, never lost the ball, and missed scoring a goal by inches, after firing a cross wide of the post from a tight angle.

Of all the mentioned missing men, it is Calleri that I’d most like to see succeed. Hopefully he will score another goal or two and help West Ham claim a respectable mid-table finish, before his likely summer departure back to South America.