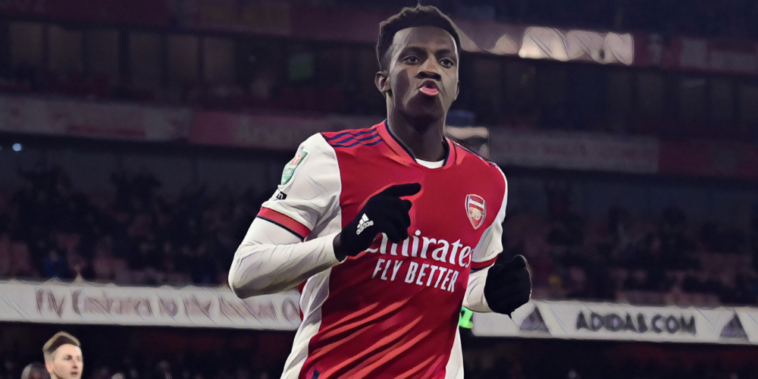 West Ham are in ‘pole position’ to sign Eddie Nketiah this summer as the forward approaches the end of his contract at Arsenal.

Nketiah is set to become a free agent this summer and has so far failed to agree a new deal at the Emirates, with the 22-year-old seeking assurances over his role in Mikel Arteta’s plans.

Nketiah started his first league game of the season last month and has since been named in the starting XI for each of the Gunners’ last five fixtures, scoring braces in wins over Chelsea and Leeds.

However, it is unclear whether his recent run in the side will be enough to convince the forward to remain at Arsenal beyond the end of the season and the Mail are reporting that West Ham are leading the chase for his signature.

Nketiah has scored nine goals from just 10 starts across all competitions this season and is the all-time record goalscorer for the England u21 side.

Another meeting has been planned between the academy product and Arsenal over a potential new deal, though his future will depend on a guarantee of first-team football.

West Ham are in the market for a centre-forward this summer with the club having been reliant on Michail Antonio. David Moyes is also understood to be an admirer of Aston Villa’s Ollie Watkins.

Arsenal have been linked with Man City’s Gabriel Jesus.