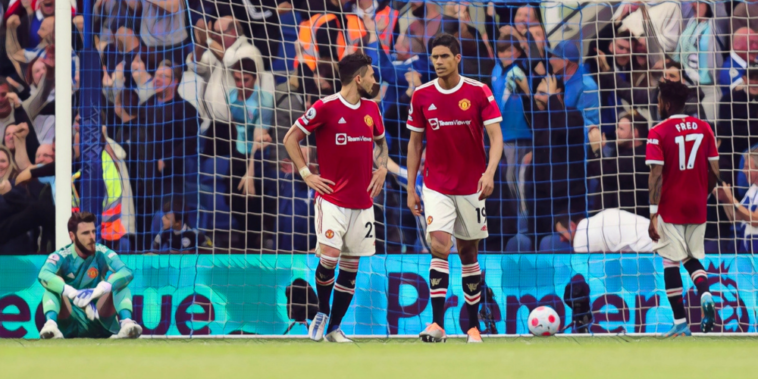 The latest fixtures provided some huge results in the season’s context, with Liverpool’s 1-1 draw with Tottenham having implications on both the Premier League title race and battle for Champions League football.

Elsewhere there was a massive win for Everton at Leicester, though Leeds and Burnley were beaten to increase fears over relegation.

Eddie Nketiah’s double to down Leeds and his renaissance captured most of the headlines from Arsenal’s win over Leeds, but it was Gabriel Martinelli who helped lead the Gunners to a big win in their push for Champions League qualification.

Martinelli posed plenty of problems for the visitors down the left, with Leeds unable to live with the speed and directness of the Brazilian.

The 21-year-old gave Luke Ayling a torrid time during the opening exchanges at the Emirates, his performance contributing to the frustration that saw the full-back sent off for a dangerous lunge on Martinelli inside the opening half an hour.

Martinelli’s assist for Nketiah’s second goal took the forward to 10 goal involvements this season and Arsenal’s promising young side now has five players under the age of 23 – Bukayo Saka, Emile Smith Rowe, Martin Odegaard, Nketiah and Martinelli – to have reached that figure this season.

Norwich are heading towards the Championship without as much as a whimper and suffered a home humiliation against West Ham this weekend, a poor performance hindered further by goalkeeping gaffes from Tim Krul.

The Dutch international should have done better for Said Benrahma’s opener despite a deflection, before another piece of questionable goalkeeping saw Krul parry a loose ball off his own defender, providing Michail Antonio with an open goal.

It was a disappointing display from the club’s most experienced Premier League performer, who will once again form part of a Canaries team searching for promotion back to the top flight next season.

On the evidence of recent sub-standard showings, however, there is no guarantee a notorious yo-yo club will bounce back.

Raheem Sterling returned to the Manchester City side this weekend and provided a reminder of his value to the side, scoring twice as the defending champions moved a step closer to retaining the title with a 5-0 win over Newcastle.

Sterling scored his first with a goal that has become a signature for the England winger in recent campaigns, arriving into the box to turn home from close range after Joao Cancelo’s centre.

He added a second in stoppage time to cap a performance of direct running and dangerous dynamism, having given Matt Targett a torrid time at the Etihad.

Sterling’s headed opener was also his 50th goal scored at the Etihad, becoming just the second player after Sergio Aguero (106) to reach the milestone.

Manchester United’s worst ever Premier League season was confirmed with a disastrous defeat at Brighton, sinking to new lows with a 4-0 thrashing at the Amex Stadium.

Brighton were brilliant against a Red Devils team outmuscled, outfought and outclassed, with the Seagulls’ forward line running a centre-back partnership of Victor Lindelof and Raphael Varane ragged.

The latter has looked a shadow of the player who won four Champions League trophies at Real Madrid during a difficult debut season in the Premier League, his latest showing arguably his worst in the club’s colours as he looked nervous and panicked against the Brighton pressure.

• Champions League hopes officially over
• Lowest ever PL points total in a season confirmed
• 56 goals conceded, most in a PL season
• First team to concede four to Watford and Brighton in the same top-flight season

His defensive teammates were equally as bad on a chastening evening for the Red Devils, but much better is expected from the man signed last summer to fix the club’s defensive issues.

Varane’s first season is set to end with Manchester United posting their worst defensive record in the Premier League era.

Brighton produced their best performance of the season to thrash Manchester United 4-0 this weekend, a showing in which it all clicked for Graham Potter and his side.

The Seagulls are heading towards their highest ever Premier League finish and Potter deserves plenty of praise for his work at the Amex Stadium, building an attractive side with plenty of promise and positives.

Shrewd signings have been a major factor in Brighton’s progress and Marc Cucurella has been a fine addition to their ranks, the former Barcelona prospect enjoying another stand-out performance full of hard-running, defensive tenacity and quality in possession against the Red Devils.

Cucurella started on the left of a back three having more regularly featured at wing-back this season and the 23-year-old was a constant outlet, capping his display with a superb first Premier League goal.

It is little wonder that rival clubs – including Chelsea and Tottenham – are reportedly considering a summer approach.

Stupidity of the highest order from Luke Ayling, who allowed his frustration to boil over in Leeds’ 2-1 defeat to Arsenal with a ludicrous challenge on Gabriel Martinelli.

With his side already two goals down inside the opening 10 minutes at the Emirates, the full-back launched himself two-footed into Martinelli near the corner flag to earn his marching orders after just 27 minutes.

Ayling’s inexplicable decision left Leeds with an almost impossible task to get back into the game and he now looks set to sit out the remainder of the season as his teammates battle to beat the drop without him.

Jesse Marsch will be far from happy with the recklessness shown from one of his most experienced players.

Emiliano Buendia produced arguably his best performance in an Aston Villa shirt this weekend, scoring one and creating another in the first half of the club’s 3-1 win at Burnley.

Buenda carved open the Clarets defence to set Danny Ings away for the opening goal, before side-footing a deflected second home for just his third Premier League goal of the campaign.

Emi Buendia's first half by numbers vs Burnley:

The 25-year-old has not hit the heights expected since his club-record arrival from Norwich last summer, but this was a performance that will encourage Steven Gerrard as he reshapes his team ahead of next season.

The best player on the pitch at Turf Moor, he ended the contest with four progressive passes and five progressive carries in a display full of positivity.

It’s been a mixed season for Mohammed Salisu and Southampton, whose fine performances have come alongside erratic displays.

The Saints are now nervously looking over their shoulder after a four-game winless run with Ralph Hasenhuttl’s side beaten convincingly by Brentford this weekend.

Salisu and centre-back partner Jan Bednarek struggled badly in the stinging loss to the Bees, with the former failing to cope with Ivan Toney and beaten far too easily as Kristoffer Ajer scored a third goal for Brentford.

Southampton are six clear of the drop zone at present, but with each of the three teams behind them having at least one game in hand could soon find themselves dragged into the dogfight.