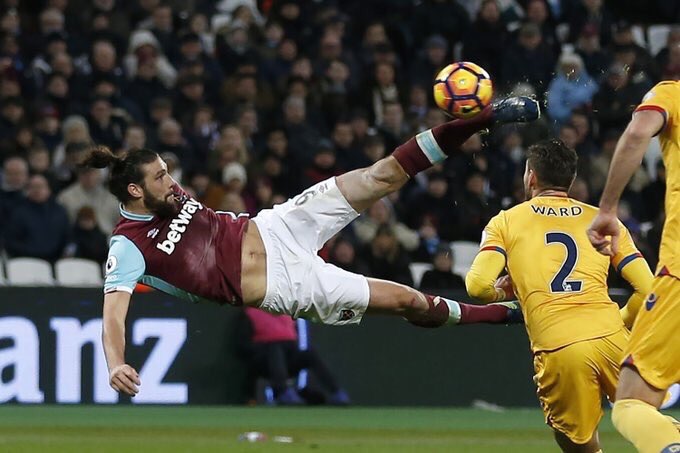 It was a case of Dimitri Payet who, as West Ham comfortably beat Crystal Palace 3-0 at the London Stadium on Saturday with Andy Carroll taking a leading role in proceedings by scoring one of the goals of the season so far.

On 79 minutes Carroll met Michail Antonio’s cross and volleyed home a spectacular scissor kick to put the Hammers 2-0 up. Earlier in the second half Sofiane Feghouli had given West Ham the lead, tapping home another Antonio cross from close range.

The game was always going to be over-shadowed by the Dimitri Payet saga, as he had told West Ham during the week he would not play for the club again and wanted to leave. There we no Payet shirts on display in the club shop, and no fans were wearing replica shirts with Payet 27 on the back. What a difference a week makes, as at the last home game there were thousands of adoring fans proudly displaying their Payet allegiance.

Fans turning up for the game on this cold and chilly afternoon needed some first rate entertainment early doors but neither side was able to provide this in a stale and moribund first half. West Ham probed and passed the ball sideways a lot and Crystal Palace seemed happy to frustrate the Hammers and sit deep and defend.

Carroll came closest for West Ham in a first half with very few chances, half volleying a Mark Noble cross over the bar from just inside the box. This seemed to stir Crystal Palace into action as a smart volley from Yohan Cabaye was well saved by Darren Randolph in the Hammers goal.

Noble was manfully trying to dictate the pace in midfield for West Ham, but all to often he gave the ball away or misplaced a pass. His midfield companion Pedro Obiang was consequently running around all the more to try and retrieve the ball every time it went astray.

One such moment with Noble gifting the ball to Palace very nearly resulted in a goal with the half’s best chance falling to ex-Hammer James Tomkins. Having given away the ball near the halfway line Noble chased back and gave away a free-kick deep in West Ham territory. The resulting free kick was floated across the goal mouth to the far post where Tomkins, instead of side-footing the ball into an open goal, decided to hit it with the outside of his right foot, with ball missing the goal by a foot.

The first half ended 0-0 with West Ham having dominated possession, but with Palace and their more direct approach having the best chance.

West Ham made an important change for the start of the second half, bringing on Sam Byram for Angello Ogbonna and changing to a back four instead of the ineffectual three at the back.

This immediately made an impact and West Ham looked more of a threat with space opening up for Feghouli in particular, who was having a good game on the right wing. His darting runs and trickery causing the Palace defence a number of problems.

On 68 minutes if was the Algerian Feghouli who made the important break-through. A chip over the top of the Palace defence found Antonio racing clear with only the keeper Wayne Hennessey  to beat. Having rounded the keeper Antonio’s cross come shot was then slotted home by Feghouli as he slid between two defenders to slot home the opening goal.

Palace where now on the back-foot and Carroll, who had gone close to scoring on three occasions, made it 2-0 on 79 minutes when he scored what he later said was probably the best goal he has ever scored.

Lanzini late strike was the icing on the cake for West Ham and the 3-0 scoreline went a long way to helping home fans that they and their team do not need the talisman Payet and there is life without the Frenchman. The three points put Hammers in 12th spot in the Premier League and importantly moved them away from the relegation zone into mid-table security.

As for Palace and Big Sam, the defeat leaves them on 16 points and in 17th spot. For the Eagles it looks like a long hard run-in is in store for the rest of the season.