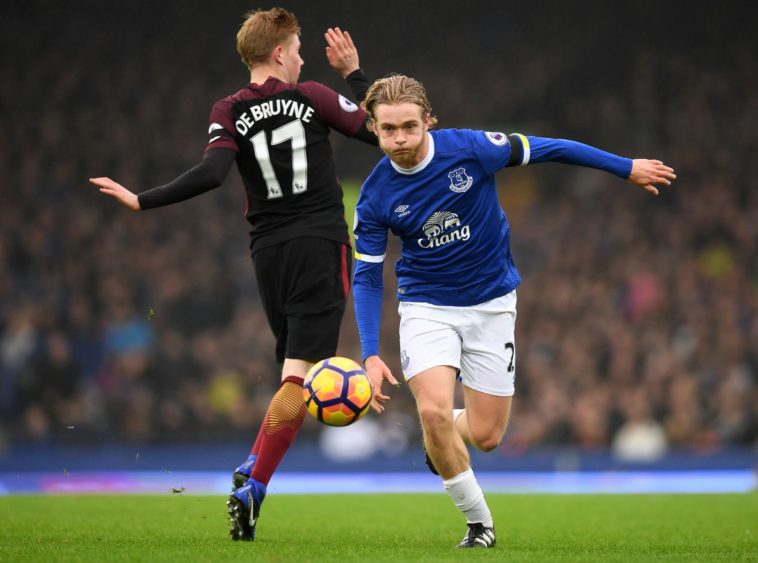 In one of the most unexpected results of the Premier League this season, Everton hammered Manchester City 4-0 with goals from Romelu Lukaku, Kevin Mirallas, Tom Davies and debutante Ademola Lookman. The win sees the Toffees solidify their place in 7th and begin their attack on breaking the top 6.

Much was made before the game of Merseyside vs Manchester although it was the blue half of Merseyside who were of course largely ignored and never given a chance with pundits predicting a Manchester City masterclass being too much for Everton. However this was not the case. Both teams started well with each finding it difficult to break down the other team’s defenses but it was Everton, to the dismay of the aforementioned pundits, who drew first blood. Romelu Lukaku with a wonderful first time finish after a lovely bit of play beginning with the tireless Tom Davies intercepting the ball in the middle of the park. This lifted Goodison and the chants began with the crowd playing as much of a part in the game as the players on the pitch. This was where City fell apart.

You could see before half time that City were beginning to get frustrated with the Everton defense and coming close on many occasions but just putting too much on the ball to convert chances to goals. Sterling had a shot go slightly over from distance but aside from that and a penalty shout earlier in the half Everton managed to keep them quiet, despite City having the landslide of possession. Everton were defiant in their attempts to keep their lead until half time and they done so without keeper Joel Robles being tested too much.

Once the team emerged from the tunnel there was the usual Everton anxiousness going around the ground as many have become accustomed to Everton find a way to mess up a good thing, however just 2 minutes into the second half Kevin Mirallas doubled the Toffees lead with a fine shot into the corner of the City net. This is where the confidence around the ground became clear and Ronald Koeman’s men sought to demolish their opposition. Unlike previous manager Roberto Martinez, Koeman instructed his team to get out of their own half and keep attacking.

Around 65 minutes goalscorer Mirallas was replaced by the first debut boy of the day Morgan Schneiderlin to a massive ovation  for both players. He joined a midfield of Davies and Barry who were both playing very well, Davies in particular, and allowed Ross Barkley to attack and support Lukaku more. Not 10 minutes later Davies scored one of the most stunning individual effort goals you’re likely to see from an 19 year old in quite some time. Bringing the ball out and beating multiple internationally experienced players with ease the youngster was dispossessed but not long after was played in by fellow scouser Ross Barkley to score an incredibly worked goal in front of the Everton fans.

It was after this point that Pep’s boys had given up all hope and began lashing out at Everton players with it seeming like they were looking for a fight on multiple occasions with one seeing Nicolas Ottamendi comically go down holding his head despite receiving a slight chesting from Romelu Lukaku although perhaps Rom’s strength is even more than we think it is. This landed both players in the referee’s book and had Ronald Koeman so furious that he came onto the pitch to tell Ottamendi to get up and stop feigning.

Into injury time Koeman felt the game was wrapped up at 3-0 to give young Ademola Lookman his debut replacing Ross Barkley with both players again getting a rousing reception from the Goodision crowd. However this was not the end to the action as a sight so many Evertonians were used to seeing and anticipating, a John Stones error, allowed Lookman to get his first Premier League goal for the club with both fans and players going into a frenzy. It was an amazing sight to see everyone so delighted in unison with even goalkeeper Joel Robles sprinting up the pitch to join in on the celebrations.

A truly great afternoon for Everton with Koeman achieving a league victory over City, something his predecessor could not accomplish, but also handing Pep Guardiola his heaviest defeat in management. It really does look like Koeman’s Everton is really coming together and will mount a late bid on trying to crack the guaranteed European places. All in all if they performed like this every week then it would be no surprise to see them challenging for the Champions League this season and definitely next. With Morgan Schneiderlin yet to gain full fitness, Tom Davies getting better every week and more transfers incoming in the next 2 weeks it’s no massive statement to say we could be seeing a new era for Everton very soon.