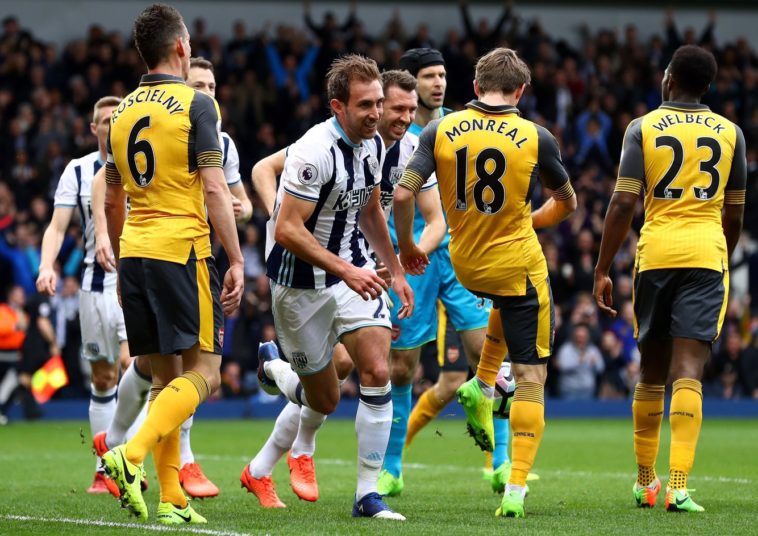 Arsenal suffered their fourth Premier League defeat in five games as they were beaten by West Bromwich Albion at the Hawthorns.

Both teams wanted to win this match but it was West Brom that came out on top. Tony Pulis’ side created decent chances at the start of the match with Allan Nyom storming past four Arsenal players but failing to find his team-mates in the box.

West Brom’s persistence eventually paid off with 12 minutes played. James McClean’s shot was palmed away by Petr Cech and Craig Dawson headed in from Nacer Chadli’s resulting corner to give West Brom a deserved lead.

While the action was taking place on the pitch, Arsenal fans were making their feelings known in the sky. A banner saying ‘NO CONTRACT #WENGER OUT’ was soon followed by ‘IN ARSENE WE TRUST #RESPECTAW’. It certainly made things more interesting at The Hawthorns.

Arsenal ensured West Brom’s lead didn’t last long as they equalised just three minutes later. Alexis Sanchez (who else) scored his 18th Premier League goal of the season after he latched onto a fantastic pass from Granit Xhaka.

Petr Cech produced a brilliant save to parry Darren Fletcher’s volley behind for another West Brom corner. That was Cech’s last action of the game after he went down with a suspected calf injury. David Ospina replaced him.

The score remained 1-1 at half-time and although Arsenal had the most possession, West Brom were the more dominant side.

Salomon Rondon had a great chance to restore West Brom’s lead in the second half after Chris Brunt’s cross but his header was just wide.

Minutes later, Rondon was replaced by Hal Robson-Kanu who made an immediate impact. Ospina got himself into all kinds of trouble as he failed to collect Chadli’s ball. As he tried to slide it clear, the ball fell to Robson-Kanu who simply tapped the ball in from ten yards to put West Brom back in front.

Arsenal’s best chance to equalise came from a Danny Welbeck header, but his effort crashed off the crossbar.

The Gunners were lucky not to be even further behind when Robson-Kanu’s chipped shot was saved by Ospina. Chadli was there for the follow up, but his effort was blocked before Brunt fired over from distance.

With 16 minutes left to play, it was game over. In almost a carbon copy of his first half goal, Craig Dawson headed in from a corner. From an Arsenal perspective, this one was even worse. Dawson was completely free to head home after the majority of Arsenal players chose to mark Gareth McAuley. Another incredibly poor defensive display from Wenger’s men.

After they were 3-1 up, West Brom just saw out the game and gave Arsenal no chance of scoring again. The Baggies and manager Tony Pulis will be delighted with a result that they thoroughly deserved. As for Arsenal, their basic ambition of finishing in the top four is looking very unlikely with those sort of performances.

Here are Five things we learned from the encounter.

If you are a West Bromwich Albion fan and are interested in writing, please join our team