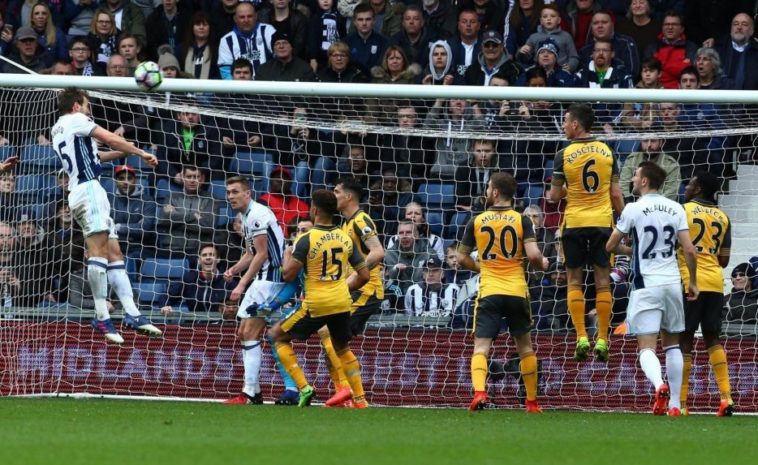 Arsenal saw themselves in nothing but more trouble after losing fI’ve consecutive away games for the first time in the Premier League since 1995. The Gunners lost 3-1 to West Bromwich Albion.

Arsenal, playing without the injured Mesut Özil and Lucas Perez, saw another embarassing loss and will now find it incredibly difficult to make top four this season.

1. West Brom came with a plan

Right from the first kick of the game, it looked like West Brom had come with a plan. It was clear that they knew exactly what they had to do to win the game.

They knew they had to stick to the basics. They knew not try to do anything special. Just sit back, defend and wait. They waited Arsenal make a mistake and then capitalised to the fullest.

They knew they could get the better of Arsenal with set pieces, and they did so by scoring two identical looking header goals from Dawson. Despite not haging much of the ball, the Baggies certainly made the most of what they did have. They thoroughly deserved to win.

2. Possesion is nothing without purpose!

Arsenal controlled the game with 73% possession. They had the ball with them for most of the game, but lacked the creativity and desire to actually go forward and make something of it, which cost them the game. Even when they were 2-1 down, there were just too many backward passes knocked around by the Arsenal midfielders, which is not something you would want to see from a team who are a goal down. They ended the game with just 2 shots on target, one scored by Alexis and another one when Danny Welbeck’s header hit the post off a Granit Xhaka corner. Arsenal’s forwards were invisible for the rest of the game, barring those two instances.

3. Protests have reached a new level

A banner saying ‘No new contract for Wenger’ was seen being displayed by a plane above The Hawthorns by some really angry Arsenal fans who just don’t seem to like the results the club is getting recently.

It was followed by another plane pulling another banner in support of the manager. Banners in, out and now above the stadium have seen Arsene Wenger being put in a very difficult situation.

He did say post match that he has made his decision on whether he’ll be signing a new contract at the end of the season or not. However, he needs to understand that the club, and the fans need to know his decision or else these protests are going to go on and on each game in one form or the other.

I really think he needs to come out and say something more openly and as early as possible to clarify the situation.

If there’s one thing every Arsenal fan would agree with, it is that Arsenal really do need a new goalkeeper. You can’t win the league if you’re sitting 7th in the Premier League’s Clean Sheets Table.

Unfortunately, Petr Cech is no more the same guy who he was in his first season at Arsenal.

I’m not judging him on the basis of this game, as he had to walk out injured in the first half.

However, he’s been nowhere near his best and has been underperforming on a regular basis. David Ospina doesn’t look like someone who can be a long term number one. He has now conceded 12 goals in his last 3 appearances.

They could either sign a new goalkeeper in the summer, or bring back Wojciech Szczesny,on loan at Roma. The Poland International has the joint highest number of clean sheets in Europe’s top five leagues this season. Whatever it is, they just can’t go into the next season without a change at the back.

5. Arsenals defence is too vulnerable

You don’t need to be a player or a manager to know that West Brom would attack Arsenal through set pieces and aerial crosses.

It was just so predictable.

But if you’re an Arsenal player, you need to do something about it. Arsenal conceded two similar goals, both headers from Dawson, as their defensive problems continued. When you’re playing at this level, you need to make sure that you don’t commit the same mistake twice in one game.

After the first goal you would expect Arsenal to be strong defensively for the coming set pieces. But instead, Dawson’s second goal of the night saw seven Arsenal players marking some other West Brom player while Dawson headed home.

As for Robson-Kanu’s goal, it was just Arsenal’s poor defence and lack of understanding and communication that lead to the goal. Bellerin, Mustafi and Monreal have been shocking for quite a few months now. Wenger needs to be ruthless and give players the axe when they’re not performing.

Overall, it just looks like Arsenal have not quite got back that confidence that they had at the beginning of the season. With important games against Manchester City, Tottenham and Manchester United coming up for them, if it continues like this, they might oddly see themselves finishing out of the Top 4.

As for West Brom, Tony Pulis has impressed and has got this team playing well. They are well placed should with able to secure the first top 10 finish of Pulis’ managerial career.

If you are a West Bromwich Albion fan and are interested in writing, please join our team.