The #WengerOut campaign was in full flow last week after a crushing 3-1 defeat to Chelsea, and his latest comments will do little to endear himself to the Arsenal fans that are calling for his head.

In his pre-match press conference, Wenger has suggested that Arsenal fans should be more like their bitter rivals, Tottenham Hotspur.

He was asked about the calls for his head after a fan was pictured with a banner reading, ‘Enough is enough. Time to go.’

Our fans have been consistent and have a high level of expectation as I do but I don’t feel you can be a fan until last Tuesday and then not be behind the team any more – it doesn’t make sense.

All the other clubs, Manchester United, Manchester City, Liverpool, they have big expectations and big history. We are in a fight and we have to be united or we have no chance.

You have Tottenham as well and everyone is behind their team and we have to do the same. Even if we have had two disappointed results I want the fans to be behind the team. Focus on what we do well. They were great players last Tuesday and they are still great player

Where Wengers point may be valid that the supporters need to be united behind the club instead of against the manager, the use of Tottenham as an example will do little to enhance Wengers reputation amongst his detractors. 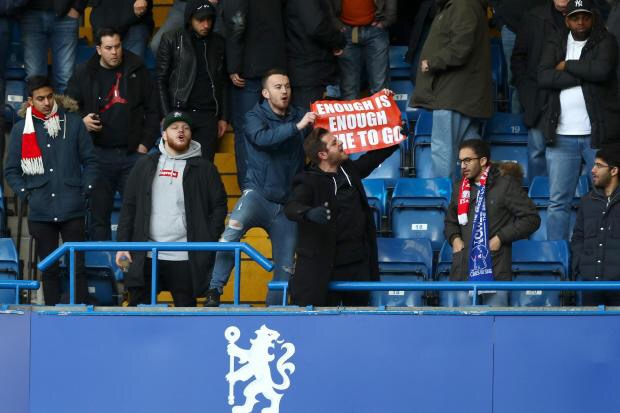 The quotes are reminiscent if when then Manchester United manager David Moyes claimed that the Red Devils should aspire to be more like Manchester City. His reign at Old Trafford was cut short just a few months after.