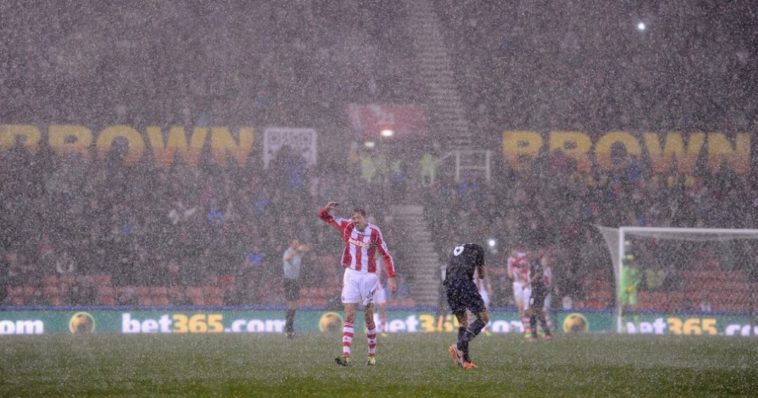 “Could he do it on a cold, wet Wednesday in Stoke” has become a tag line that is now very much associated with Stoke City since their return to the top flight of English football in 2008. Mention the Potters to anyone with an interest in football, from anywhere in the world, and you are usually met with some variation of this phrase.

Due to the inclement conditions at the then Britannia Stadium and the perceived tough style of play during Stokes earlier years in the Premier League. A midweek winters game in the Potteries became a debate point, and in some cases, a testing ground, for whether or not a top player from overseas could actually cut it in the English game.

However, back in the 1970’s, the now infamous wet and windy conditions of Stoke on Trent had a far more devastating effect on Stoke City themselves, than on any other team or player who has attempted to take on the conditions in the years since.

During the early 70’s Stoke City were a team to be reckoned with. Under the leadership of the late, great Tony Waddington, Stoke were playing an exciting brand of attacking, flowing football, which had led to consecutive FA cup semi-final appearances in ’71 and ’72, and the first piece of major silverware in Stokes, up to then, 109-year history. Lifting the League cup in 1972 after an incredible 11 game march to the final. 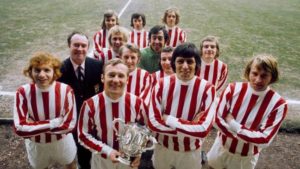 Legends of the game littered Stoke squads during this period, including world cup winners Gordon Banks and Geoff Hurst. The attacking talent of Alan Hudson, Jimmy Greenhoff, Terry Conroy and John Ritchie backed up by a fearsome defence, made up of home-grown talent, such as Eric Skeels, John Marsh, Alan Bloor, Denis Smith and Mike Pejic.

The 1974/75 season saw Stoke splashing out a world record fee for a goalkeeper with the £325,000 signing of Peter Shilton from Leicester City. A season in which Stoke missed out on the league title, by slipping away from the leading pack with just 3 games remaining, before eventually finishing in 5th place. Stoke were also making their first ventures into European football, narrowly missing out by the away goals rule, on what would have been a famous victory over the mighty Ajax, during the UEFA Cup that same season.

The Potters went into the new year of 1976 in the top half of the First Division and in decent form. Then on the 2nd of January, the day before an FA cup-tie with Tottenham at White Hart Lane, the worst storm in a century hit the UK.

Winds of up to 100 mph battered the Potteries, and drastically for Stoke, The Victoria Ground, for a period of around 8 hours before eventually tearing a section of roofing away from the Butler street stand. In the days afterwards, while work was being carried out to repair the damage, the remains of the roof collapsed completely and the consequences of this proved to be catastrophic for the club. 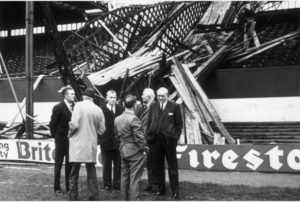 Stoke would go on to record just 5 more wins from the 17 remaining games that season, eventually finishing in 12th place.

Worse was to follow. A dispute with the insurance company over the cost of the repairs, led to Stoke having to foot the eventual £250,000 repair bill. As a result, the Potters were forced to sell a number of their star players to cover the costs. Greenhoff was transferred to Manchester United, Hudson to Arsenal, Pejic packed his bags for Everton and Peter Shilton made his way down the A50 to join Nottingham Forest.

It wasn’t just the stand that fell apart

The following year, exasperated by the sale of the mainstay of his team and left with a threadbare squad, Tony Waddington resigned. It brought to an end 17 years of management and a 25-year association with club, and ended up with Stoke being relegated to the second tier of English football.

It was a blow from which Stoke never really recovered for over 30 years. Although they regained their top-flight status in 1979, the club hung around in the lower echelons of the league, before finally being relegated in 1985, which saw a 23-year exile from the top division.

There’s no doubting that Stoke were already in some financial difficulties before the storm of ’76. However, the incident with the Butler street stand certainly didn’t help the situation. The hurricane strength winds that ripped apart the Victoria Ground on that January night ultimately played a big hand in ripping apart the Stoke team of that era, and with it, any chances they had of achieving domestic or indeed, European glory.

Alan Hudson, for one, remains adamant that Tony Waddington would have built a team that could have been talked about today as European Champions. If this would have been the case or not, of course, we can never know. Stoke fans can only dream of what might have been.

Following the storm, came the long, hot summer and the ‘Save water, bath with a friend’ drought of ’76. The drought for Stoke City Football Club, as regards to silverware, continues to this day.