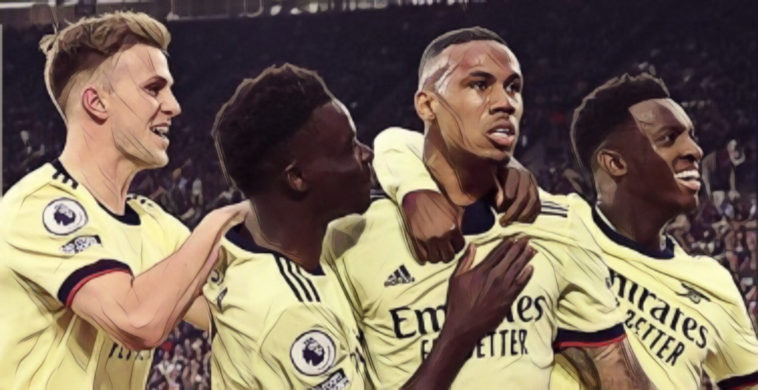 Arsenal secured another important win in their quest for a top four finish today, the Gunners securing a hard-fought 2-1 victory away at West Ham.

Despite being aware of the importance of picking up three points at the London Stadium Arsenal looked flat for the majority of the opening period.

However, after 37 minutes young striker Eddie Nketiah broke free and his effort from the edge of the area forced Hammers ‘keeper Łukasz Fabiański into a decent stop. Then from Bukayo Saka’s resulting corner Rob Holding rose highest to glance a headed effort into the bottom corner.

Arsenal’s lead wouldn’t last long however, with West Ham equalizing just before the half-time missing. Hammers right-back Vladimir Coufal found himself in acres of space down the right, and his drilled ball into the box was then finished off smartly by the impressive Jarod Bowen.

10 minutes after the break and the Gunners would regain the lead with a goal made in Brazil. Gabriel Martinelli clipped an inviting ball towards the back post and it was met by his countryman Gabriel, who headed past Fabianski.

West Ham huffed and puffed towards the end but the Gunners defended resolutely and saw it out to secure yet another crucial three points in a difficult fixture.

Speaking afterwards Arsenal manager Mikel Arteta admitted his side were not at their best, but was delighted with the spirit his team showed.

“You have to find a way to win and today we won ugly. We have to recognise that is the way we had done it,” Arteta told BBC Sport.

“I am really happy, especially for Rob Holding as he hasn’t played the amount of minutes he deserves. He was man of the match today. He is always there when we need him.”