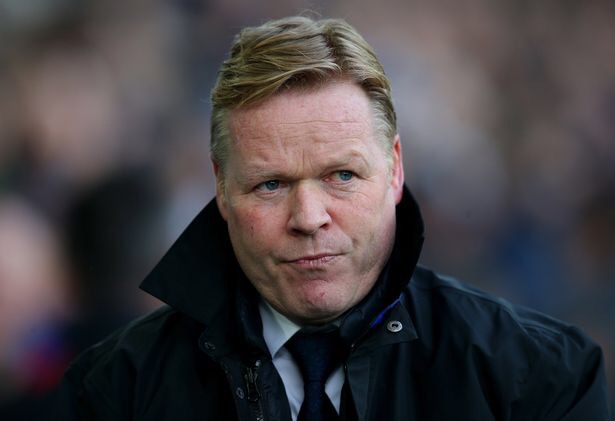 Everton have announced the sacking of Ronald Koeman after a 16-month stint in charge of the blues. After a horror show of a second season the Dutchman has been relieved of his duties, this is why I believe it was the correct decision.

At the announcement of Koeman’s sacking Everton currently find themselves in the bottom three of the Premier League and bottom of their Europa League group, the only English team not to be top of their European group. This is obviously the main reason why Koeman was given the boot.

Everton only have two wins in the Premier League this season and none in the Europa League. These results are far from what was expected of a team who had spent so much in the transfer window.

Adding to that there are some extremely embarrassing stats that come from Koeman’s reign at Everton. One is his away record in the Premier League of only four wins out of a possible 23. Another is the amount of chances Everton have created this season. Against Arsenal, the Gunners scored the same amount of goals at Goodison as Everton have in the whole season and only had one less shot on target.

Money spent in the transfer window

After spending £150 million, Koeman put a massive spotlight on himself that he could have easily done without during this poor run. To spend that much money and virtually buy a new team means the expectancy level greatly increases. There were far less calls for Koeman’s head last season when Everton where under a poor run. Why? Because it wasn’t particularly his team.

However, after spending as much as Everton did and filling the team with, presumably, signings that he wanted, the sympathy card went out of the window. If these were Koeman’s signings then surely, he planned a system where he could get the best out of those players, but time and time again that wasn’t the case.

When a team spends that much money they should be competing against the very best and that was clearly Everton’s plan at the beginning, but after only managing one point against Tottenham, Manchester City, Chelsea, Manchester United and Arsenal it is clear that Koeman may not have been the man to deliver that.

Some say it was fitting that the last ever goal of the Ronald Koeman era came from Oumar Niasse, a man who Koeman once claimed bluntly, “If he likes to play football then he needs to leave Everton.” Niasse wasn’t the only player to receive the cold treatment from the manager though. He joins a list that includes Ross Barkley, Kevin Mirallas and Ademola Lookman.

Many fans blame the near departure of boyhood fan Barkley on Koeman due to the way he treated the young man. On many occasions it seemed Koeman was taking every opportunity to have a swipe at the player in his post-match interviews. Many argue the same about Kevin Mirallas’ also near departure and the almost inevitable one of Ademola Lookman if he had stayed in charge.

Certain players such as Oumar Niasse didn’t even receive a locker or match day suit during Koeman’s freezing out of the player and that bully technique is a serious risk when form is poor. It is hard to imagine that many players would have had Koeman’s back during this poor run, especially after they were so used to the nice friendly approach of Roberto Martinez.

He lost the fans

It probably didn’t help Koeman that he was the replacement for Roberto Martinez. Martinez left the Everton board with a bitter taste about what happens when a manager begins to lose a fan base.

Once Martinez lost the fans, Goodison Park became a toxic place and there was no unity to get behind the players. The players looked nervous and away teams found it too easy to come to Goodison and get a result. This was something the board would have wanted to avoid and probably took the early decision regarding Koeman as a result.

However, this is something Koeman could have easily prevented by gaining himself more time through the sympathy vote. No, that doesn’t mean he should be jumping up and down on the touchline or diving into fans when the team score a goal. It just means he should be a bit enthusiastic about the club that he’s managing.

Koeman totally misjudged what he was getting into when he joined the club. Everton is a large club which is full of pride and the fans want it to be back where it once was. No one is bigger than the club at Everton and that is something Koeman didn’t seem to understand or buy into.

Is it any surprise that Koeman never had a song? Despite all his faults Martinez did, as did Moyes. This was because they had an enthusiasm about the club that the supporters recognised. Koeman never once gave away that feeling and it has ended up costing him.

At times this season it felt as though many fans knew how to manage the Everton team better than Koeman. Looking back, the fans solution may have saved him his job – Wingers! The Arsenal game was another game that was crying out for wingers just like many other games this season but Koeman constantly refused to play two out and out wingers.

The constant picking of his more favourable players also didn’t help. Players such as Schneiderlin, Martina and Williams spring to mind. All these players may have been his favourites in that position but they clearly were not working.

Schneiderlin had a poor pre-season and after the first few games the warning signs should have been there, however Koeman continued to play him. The exact same scenario played out with Martina. It was clear how much of a bad player he was after the Tottenham game but once again, for a good while, he was un-touched. Williams looks half the player he was at Swansea and again should have been taken out the firing line, but like the others continued to play most games.

All of these players also had replacements that, although not perfect, would arguably have done a better job if they had been given a decent run in the squad. It was clear the obvious replacement to Schneiderlin was Davies who performed admirably last season.

A lack of identity

When Koeman joined he wanted to implement an aggressive pressing style of play to the Everton team. This season couldn’t be further from that. It was actually hard to understand what Koeman was trying to achieve with this team.

Every starting 11 lacked width and everything came through the middle making it easy for the opposition to deal with every Everton attack. As for the pressing it’s hard to see if that was ever worked on in training because it was never used.

Maybe a lack of confidence was to blame, but it is hard to think of a game where it was ever achieved. This lack of style and identity made it hard to understand how Koeman was going to turn Everton’s poor form around as he seemed just as lost as everyone else.

Koeman’s solution seemed to be to constantly change the formation in the hope he would hit the winning combination. Throughout the season he switched between a 4-2-3-1, 3-4-1-2, 3-4-2-1 and 4-1-4-1 formation. This lead to a lack of shape in the team as players were confused about what their roles were which resulted in poor performances.

In summary, not everything that went wrong was Koeman’s fault. I left the failure to sign a striker out of this as I believe the blame lies towards the board for that one. However, Nil Satis Nisi Optimum is the motto of Everton football club and under Koeman that standard certainly wasn’t being met.