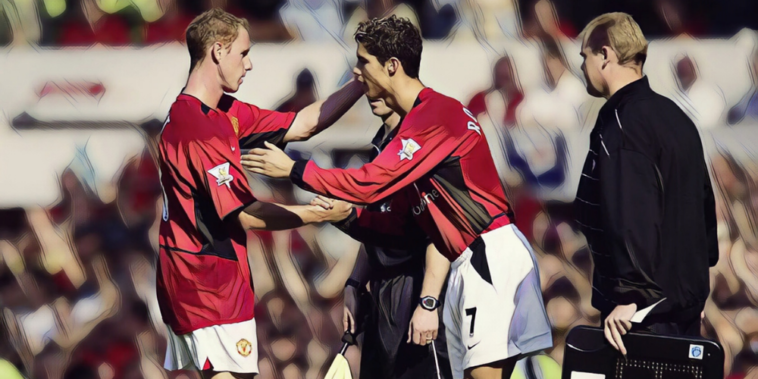 Utter the name Cristiano Ronaldo and even those with no interest in sport will have heard of one of football’s finest footballers.

Ronaldo’s notoriety is a result of a spectacular career in which all-time records have been passed with an almost effortless ease, his journey having been one of an upward trajectory that has pushed beyond barriers.

It’s easy to forget a time then, when Ronaldo was little more than a promising teenage talent, an untried and untested youngster who suddenly found himself entrusted with Manchester United’s hallowed number seven.

David Beckham’s departure to join the Galactico project at Real Madrid left Sir Alex Ferguson with a sizeable hole in his squad, one the Scot chose to fill with the signing of Ronaldo from Sporting Lisbon.

Few had heard of the 18-year-old winger upon his arrival into the Premier League, but his new teammates were well aware of his frightening potential following a pre-season encounter between the two sides in August 2003.

That evening at Lisbon’s Estádio José Alvalade proved one that would catapult Ronaldo into the consciousness and accelerate his pathway to legendary status.

Man United were the reigning Premier League champions and invited to the Portuguese capital as a curtain-raiser for the newly-constructed stadium, but departed determined to secure the signing of Sporting’s irresistible academy graduate.

Ronaldo rose to the occasion to torment the Red Devils’ full-backs, his searing pace and array of trickery prompting Ferguson to waste no time in making his move – a deal was concluded to bring the teenager to the Premier League just days later.

Ronaldo was raw but his potential had lit a fire inside Ferguson, who convinced the summer signing to inherit the number seven shirt left vacant by Beckham’s move to the Bernabeu.

Just a little over a week after Ronaldo had lit up Lisbon with his fleet of foot, he was included in the match-day squad for the opening fixture of the Premier League season.

Bolton were the visitors to Old Trafford in the season’s opener, with those who entered the ground knowing little of the precociously talented arrival, but for the murmurs and footage of that night in Portugal.

The first half passed with Ryan Giggs’ brilliant free-kick separating the sides at the interval, as the hosts struggled to find clear daylight between themselves and the resilient visitors.

Bolton had proven a difficult test since their return to the Premier League and had won on each of their last two visits to Old Trafford, taking four points from the champions the previous season.

It would take the introduction of Ronaldo to take the game away from Sam Allardyce’s stoic side.

Ronaldo’s arrival came just after the hour, with the winger introduced as a scrawny second-half substitute in place of Nicky Butt.

The excitement – even for an unknown quantity – was palpable.

His highlighted hair, earring, and braces looked more akin to a youngster finding his feet at secondary school, but it took less than 30 minutes for Ronaldo to prove he belonged amongst the best.

His first couple of touches went awry as the nerves settled for the teenager, who started on the left flank and began to torment Nicky Hunt.

1⃣8⃣ years since Cristiano Ronaldo made his first debut for Manchester United against Bolton, former defender Nicky Hunt explained what he was told to do by his manager Sam Allardyce to try and contain the forward… 😂 pic.twitter.com/SHaw08gEYH

The electricity of Ronaldo’s pace won the Red Devils a penalty, his burst into the box leading to Kevin Nolan hauling down the debutant, only for Ruud van Nistelrooy to see his spot-kick saved by Jussi Jaaskelainen.

Having been fortunate to head into the half-time break ahead, the champions were now in control and on the front-foot with the sublime skills of the silver-booted Ronaldo causing havoc on the flanks.

Ronaldo was fearless, flamboyant, and frighteningly quick, burning beyond Bolton’s defenders time and time again as the Stretford End rose to salute the arrival of a thrilling talent.

Perhaps the greatest testament to Ronaldo was the instant trust his teammates had in his talent, acknowledging the threat the winger provided and continuing to provide the Portuguese with possession.

The trademark step-overs and feints were in full flow as Ronaldo fluctuated between extravagant and arrogant, switching to the right and creating guilt-edged opportunities for both Diego Forlan and Van Nistelrooy.

There is something enthralling about watching footballers so dangerously direct, possessing an inner self-confidence to ignore others and make things happen singlehandedly.

For a teenager making his first appearance at one of world football’s biggest clubs, it was unheard of.

Approval roared around Old Trafford following one second-half surge, Ronaldo picking up possession mid-way inside his own half before turning away from Ricardo Gardner and shifting through the gears at speed.

Both Jay Jay Okocha and Bruno N’Gotty make desperate attempts to stop him in his tracks, before Ivan Campo’s cynical challenge resulted in a free-kick and rapturous applause from the home crowd.

Gardner found himself in the referee’s book soon after, a crude challenge born out of frustration welcoming Ronaldo to the Premier League, though the youngster stood up confidently to take command of the set-piece from more senior teammates.

Ronaldo’s introduction had helped turn a narrow contest into a lop-sided result, as a second goal from Giggs and further strikes from Paul Scholes and Ruud van Nistelrooy saw United’s title defence begin with a 4-0 win.

Whilst the debutant had failed to impact the scoresheet, there was no doubt over whose performance was the talking point around the club.

From almost unknown to exhilarating prospect within the space of a second-half cameo, the plaudits arrived for Ronaldo, with a former incumbent of Manchester United’s fabled number seven showering the teenager with praise.

“It was undoubtedly the most exciting debut performance I’ve ever seen.

“There have been players who have some similarities [to me], but this lad’s got more than anyone else, especially as he is genuinely two-footed. He can play on either wing, beat players with ease and put in dangerous crosses with his left or right peg.

“When was the last time you saw that?”

Despite the clamour for his inclusion, Ferguson took a patient approach with a player who earned a first call-up for Portugal in the days following his brilliance against Bolton.

He scored his first goal against Portsmouth two months later, before evolving into arguably world football’s finest talent across six seasons in Manchester.

From a fleet-footed talent with a penchant for over-indulging on the party pieces, to a bona fide goalscoring genius who inspired the Red Devils to their greatest successes this century.