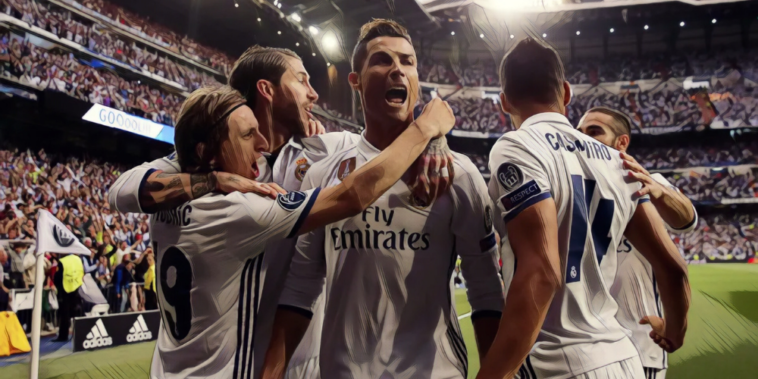 Cristiano Ronaldo’s greatest nights have often come on floodlit evenings in the Champions League. There’s something about continental competition, a night game preceded by the unmistakable sound of the Champions League anthem, that has brought the best from one of the sport’s superstars.

No individual has ever scored more goals in the Champions League, with only Lionel Messi within a reasonable distance of Ronaldo’s record. Ronaldo’s list of firsts and mosts is both lengthy and extraordinary, from winning the competition on five occasions to scoring in three different finals.

His finest football and performances came in the colours of Real Madrid, a period in which a side with a rich history among Europe’s elite were propelled to further success by a great of the game.

Ronaldo had helped Los Blancos end more than a decade of waiting to win La Decima in 2014, scoring in extra-time of the final as Real beat city rivals Atletico Madrid in Lisbon.

Remembering the Real Madrid XI that won ‘La Decima’ in 2014

It was the first final meeting between two teams from the same city and the start of run of dominance from Real Madrid, with their cross-town rivals suffering more than most at the hands of a winning machine.

The two teams met in the final for a second time in 2016, with Ronaldo again at the centre of his side’s success. He stepped up fifth in the shootout after a 1-1 draw, slamming home an emphatic effort to crown Real as champions, again.

Atletico Madrid had forged a reputation as formidable opponents under Diego Simeone, but there was no doubt dread amongst Los Colchoneros when paired with their illustrious neighbours for a fourth consecutive Champions League campaign.

In between their two final defeats had been a quarter-final elimination at the hands of Real, with the two pitted together again in the last four in 2016/17.

Los Blancos had represented kryptonite to Diego Simeone and his side, an insurmountable obstacle in their path towards European success.

Heading the enemy’s battalion, was the irrepressible Ronaldo.

As the first leg meeting at the Santiago Bernabéu approached, Atletico were well aware of the challenge that lay in wait. Real and Ronaldo had beaten Bayern Munich over two legs in the previous round, with their Portuguese talisman having scored five goals across the two fixtures.

He scored a stunning hat-trick in the return as Real won 6-3 on aggregate, netting twice in extra time as the Spanish side overran their Bavarian opponents in the added period.

Ronaldo had also produced a finishing masterclass during season’s first La Liga meeting between the sides, scoring a hat-trick as Real won 3-0 in the final Madrid derby at the Vicente Calderón.

As expected, an atmospheric cauldron was created as the capital clubs met once again, with the home support expectant and the visitors in search of redemption.

It took just ten minutes for a familiar narrative to surface as Ronaldo headed the hosts ahead. Casemiro fired a bouncing ball across the Atletico area, one which was met by the leaping Ronaldo to open the scoring.

Real dominated the opening exchanges, but showed a wastefulness when opportunities arrived. Karim Benzema spurned Real’s best openings, whilst Kevin Gameiro was thwarted by Keylor Navas as Atletico momentarily threatened at the opposite end.

Ronaldo, however, was hell-bent on ensuring Real secured the commanding lead their performance deserved and on 73 minutes struck a fatal blow to Atletico’s hopes.

Benzema nudged the ball towards his teammate and the outstretched leg of Felipe Luis only led to a favourable break for Ronaldo. The ball bouncing invitingly, he lashed home a venomous second to double Real’s advantage.

Atletico, normally so solid defensively, could not cope.

Ronaldo’s time at Real Madrid had seen him evolve into a goalscorer of supreme quality. As his legs aged, so did his mind, moving more central and focusing intelligently on the art of positioning.

The whirling legs of his early Manchester United career had been replaced by a calculated, cold killer. He had mastered efficiency over extravagance, each move pre-meditated and designed to given him the greatest chance of bulging the net once again.

Atletico pushed forward in search of a crucial away goal, seeking a lifeline in the tie ahead of the return at the Calderón.

Their desperation instead led to the end of the tie as a contest, as Real broke to make it three. Lucas Vasquez – on as a substitute with the game stretched – powered forward on the overlap and drove towards the byline.

The winger’s cut-back evaded the retreating Atletico defenders and found Ronaldo, who made no mistake to side-foot home his hat-trick goal and carry his side one step closer to the Cardiff final.

This was the biggest of names delivering on the big occasion, a one-two-three combination to reemphasise Real Madrid’s status as the capital’s leading side and leave Atletico lingering in their shadow.

He became the first footballer to score successive hat-tricks in Champions League knockout round fixtures, moving to 103 goals in the competition in the process. 13 of those goals had come in semi-final contests, another landmark for a goalscoring genius.

The all-Spanish showdown had been decided by Ronaldo, whose definitive display had all but booked Real Madrid a place in the final.

Even given the wealth of incredible performances he produced during his near-decade spell at the Bernabéu, this was something truly special.

Defeat in the return failed to prevent their passage to a date with Juventus at the Millennium Stadium, where Ronaldo scored twice as Real became the first side to defend the trophy in the Champions League era.

A third in succession and fourth in five seasons followed in 2018, a golden age for world football’s grandest club inspired by the remarkable Ronaldo.

When the pressure is high and the spotlight shines brightest, few footballers revel in the moment more.