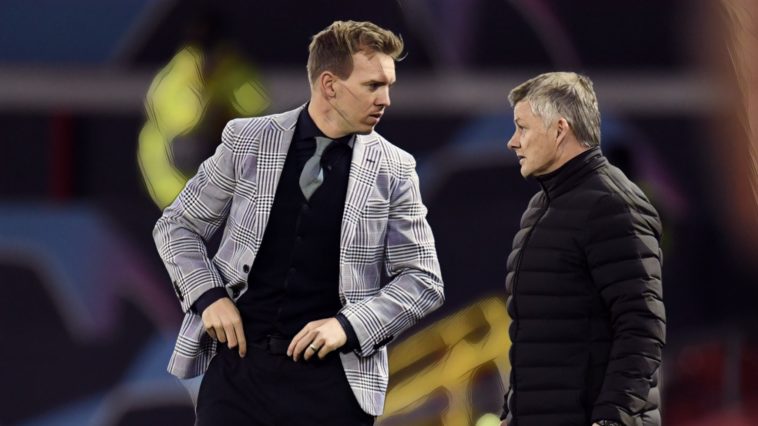 The funniest tweets from the world of football this past week, featuring Julian Nagelsmann’s garish suit, Marcus Rashford showing his generosity on the pitch as well as off it, the reaction to Nobby Stiles’ passing, and Dundalk’s own ‘Thierry’.

Man United thumped RB Leipzig, and Nagelsmann’s pain was compounded by the attention given to his bizarre outfit.

You cannot wear that suit and get beat 5-0

Julian Nagelsmann thought he could dress like a Superyacht salesman and profit? There has to be rules…

Perhaps if Nagelsmann didn’t want to talk about his clothes, he shouldn’t have worn such a loud suit.

Sky Germany: “So your outfit won’t be going in your wardrobe as a lucky jacket…”

Julian Nagelsmann: “Don’t talk so much about my clothes. I wear what I like. I’m a football coach, not a model.” 🥶 pic.twitter.com/MpGORIEkEk

The win capped off another marvellous week for Marcus Rashford.

Getting publicly humiliated by Marcus Rashford

Rashford has done a better job of lowering Upamecano's transfer value than Woodward's first offer ever could.

His generosity knows no bounds, after he gave Anthony Martial a penalty despite being on a hat-trick.

Rashford gave the penalty to Martial? He really wants everyone to eat. 🥺🥺🥺

Kieran Tierney has no time for sleeves.

The football world paid tribute to footballing legend Nobby Stiles, who passed away this week.

We are extremely saddened to learn of the passing of Nobby Stiles MBE.

An integral part of our first-ever European Cup-winning side, Nobby was a titan of the club’s history, cherished for his heart and personality on and off the pitch.

He will be sorely missed by us all. pic.twitter.com/aT0Mk47cEl

Rest in Peace Nobby. Thank you for all you did for us. You taught us how to fight for everything in that red shirt .

“ Your studs are your best friends out there “ ❤️ pic.twitter.com/njE02x7yDx

Saddened to hear that Nobby Stiles has passed away. Another of our 1966 World Cup winning heroes leaves us. He had a heart that was even bigger than the gap in his teeth. RIP Nobby.

Dundalk faced Arsenal in the Europa League this week, and one of their players was a massive Gooner judging by this.

💬 “Thierry Henry was my idol when I was growing up. I asked for Thierry as my confirmation name. They said no at the start but the teacher came back two weeks later and said he was a saint and that I could have it!”

The Irish side lost 3-0, but they did come away with a little piece of history.

Dundalk become the first team not to concede a single foul in a match in the Europa League. What jolly pleasant fellows.

This is an infinitely better name for the competition than “The Checkatrade Trophy”.

📢 Big news⚽️fans… it’s a done deal! We’re super excited to announce our 3 year partnership with @EFL and official sponsorship of the Papa John’s Trophy! Watch this space for game info, competitions and more – bring it on! 💪 https://t.co/fVisuraapZ #PapaJohnsTrophy #EFL pic.twitter.com/9QtuCJr27u

Read: How Waddle and the Owls became the beautiful losers of the nineties