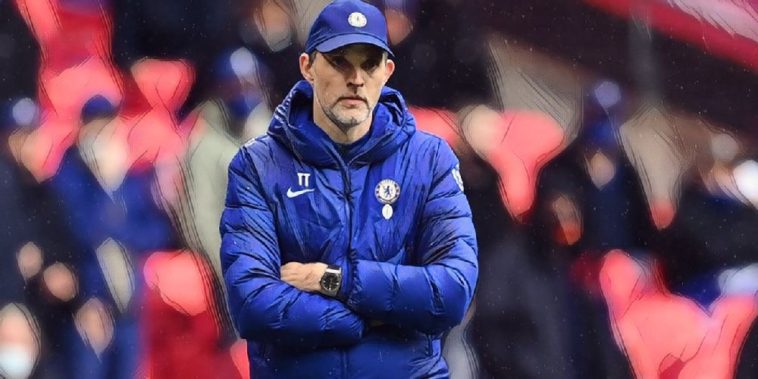 In front of a reduced, yet undoubtedly noisy, Wembley crowd, it was Chelsea who made the brighter start, Timo Werner showcasing his electric speed to test the Foxes backline early on.

Despite controlling the opening exchanges, the first real chance of the match fell to their opponents, Timothy Castagne getting in down the right and teeing up Jamie Vardy inside the area, the veteran striker’s effort well blocked by Reece James.

At the other end of the pitch, Thomas Tuchel’s men almost fashioned a chance of their own, Thiago Silva’s dinked cross agonisingly evading the head of Cesar Azpilicueta at the back post, after the slightest of touches from teammate Werner.

The German international was heavily involved in that first-half, yet couldn’t quite make the most of a few promising opportunities, while Leicester’s lethal marksman Vardy glanced a header wide after a delightful ball over the top from Youri Tielemans, as the two sides went in level at the break.

After a difficult first-half, the Foxes were much improved after the interval and eventually broke the deadlock in stunning style through midfield lynchpin Tielemans. Driving at the Chelsea defence, the ever-impressive Belgian unleashed a belting long-range effort that sailed into the roof of the net past a helpless Kepa Arrizabalaga.

That pinpoint effort provided the spark needed to ignite the showpiece, the London side almost drawing level through substitute Ben Chilwell, the Englishman’s header superbly clawed away by former teammate Kasper Schmeichel.

The Denmark international then produced another brilliant save minutes later to this time deny Mason Mount, diving to his left to get a vital fingertip to the midfielder’s seemingly goalbound half-volley.

In a frantic finale, Chelsea were again denied an equaliser, this time by VAR. Chilwell – whose every touch had been met by a chorus of boos from the opposition support – bundled the ball home at the back post after a superb floated ball from Silva, before the technology intervened to deny him by the tightest of offside margins.

Following that immense swing of emotions, Rodgers’ men ultimately hung on to claim a first ever FA Cup win for the club, while the Blues were condemned to a second successive defeat in the final, after last year’s loss to Arsenal.

August 2020: Thomas Tuchel and Thiago Silva lose in the #UCLFinal

May 2021: Thomas Tuchel and Thiago Silva lose in the #FACupFinal

They could make it a hat-trick on May 29… pic.twitter.com/wTIa1shxKu

Despite the disappointing result, Tuchel insisted that his side did enough to win the match and were ‘unlucky’ to come out on the losing side.

“We are disappointed and not angry with our performance from the boys. I think the performance is enough to win it,” he told his post-match press conference. “I think today we were unlucky and we’ve never hidden that we need to have that to win at this level. You need momentum, decision making, little details, the referee.

“I think we defended well, counter-pressed well, didn’t allow counter-attacks by one of the best counter-attacking sides in Europe.

“Our decision making in the first half was too hectic, we tried to force the solution. We created two against two and three against three situations that were more promising than we made of it.

“We had a big chance with Azpi and in the second half we controlled the game. We conceded a goal from nothing. It’s a fantastic goal and a lucky goal. We have a chance from Mason, an offside goal that was very close. We were unlucky today.”

Although they will undoubtedly be disappointed, the Blues have little time to dwell on that defeat with a vital clash with Leicester to come on Tuesday night, as well as the upcoming Champions League final.

“There’s nothing much to do,” he said. “We focus on our performance. We will talk about what we do and what we can do to be better.

“There is no single player who never loses. Now it’s about bouncing back and showing the right mentality on Tuesday. We missed a trophy and we are sad about that. But we have another competition now.”

Chelsea are the first team this century to lose the #FACupFinal in back-to-back seasons.

That loss has raised questions over a perhaps level of inexperience in the current Chelsea side, although the former Paris Saint-Germain boss insisted that it is more a ‘lack of composure and precision’ that has at times been their downfall.

“We can do better even if we are inexperienced. I’m not sure if it had to do with our age. We can improve there. It sticks a bit with us throughout the season: a lack of composure and precision. But nothing that holds you back from winning games. We had the issues in other games where we score.

“If we score a late goal we talk about the performance in another way: we kept calm, our work rate high, our concentration high. We did very well against Vardy and Iheanacho and I’m happy with how we defended.

“As a coach, I can’t judge just from the result and I will not start now.”

While there was some controversy over the late disallowed goal, the games eventual winning goal also saw a potential contentious moment, the ball appearing to strike Ayoze Perez’s arm in the build-up to Tielemans strike.

Youri Tielemans fired @LCFC to their first-ever #EmiratesFACup trophy with a stunner from range! pic.twitter.com/Wcm4WdhyW9

Although Tuchel insisted he had not seen the incident, he did hint at a slight confusion over what actually constitutes to handball or not.

“I didn’t see it. My assistant saw it on the screen on the bench and the players said it straight away that is was a handball. For the second time, there was a handball against Arsenal and VAR didn’t intervene.

“Today Leicester score a goal but I’m not an expert in handball. I don’t know what it’s handball now or not. So I can’t comment and give my opinion and I don’t know why it’s ok.”

Chelsea will hope to exact revenge on Tuesday night, before taking on Aston Villa on the final day.