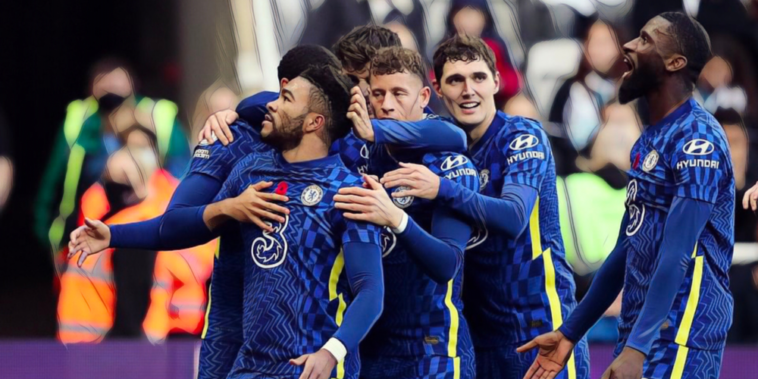 Chelsea extended their lead at the top of the Premier League with three second-half goals against struggling Newcastle United.

It was a game of total dominance from the early league leaders, who bossed proceedings at St James’ Park from the off, though they failed to register a shot on target in the opening 45 minutes with Hakim Ziyech missing a couple of presentable chances.

Chelsea upped the pressure even further after the break, and would finally take the lead that their dominance deserved in the 65th minute, Reece James lashing a venomous strike beyond Karl Darlow with his left foot following some good work by Callum Hudson-Odoi down the left.

12 minutes later and the wing-back bagged his second, smashing into the back of the net from a similar position to his first after Ruben Loftus-Cheek’s initial effort had been blocked and had left Darlow stranded.

The Newcastle ‘keeper would bring Kai Havertz down in the box with nine minutes to play, with Italian midfielder Jorginho confidently firing the resulting penalty straight down the middle to wrap up the points.

Speaking after the game, Thomas Tuchel was pleased with his side’s patience up against Newcastle’s defensive setup, praising their hunger, discipline, and ‘excellent’ counter-pressing.

“Don’t confuse patience for falling asleep,” he told Match of the Day. “It was necessary to be patient and it was necessary also when you are more or less the only team who is responsible for the intensity and rhythm of the game.

Asked about Newcastle’s defensive approach to the game, the German said: “It can frustrate you. Big credit to the team for staying positive and to hang in there with the right attitude and never lose quality off the ball.”

The result moved Chelsea three points clear of Liverpool who were held to a 2-2 draw against Brighton, and five clear of Man City who were beaten by Crystal Palace.

“It is a good day because of us,” he said. “I believe what goes around comes around and I don’t feel happy to celebrate other performances and results. We should be focused on ourselves.

“There is a long way to go and we know what we consistently need to produce to be able to have results. It is never the moment to be happy about other teams dropping points.”

Next up for Chelsea is a trip to Sweden to take on Malmo in the Champions League before taking on Burnley next weekend in the Premier League.