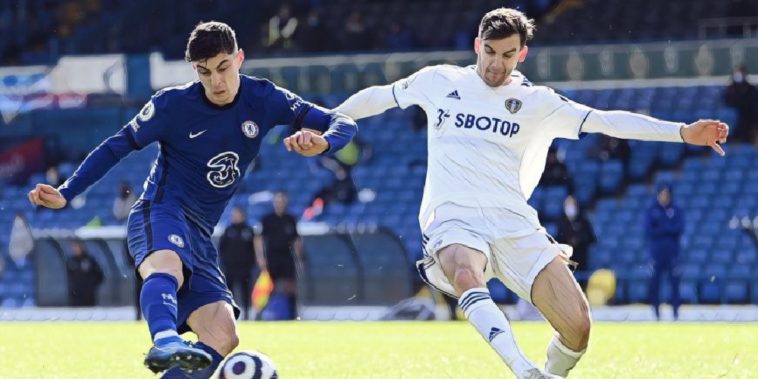 It was a game played at a frenetic pace at times, with both sides showing plenty of attacking adventure as you would expect given the respective managers in the dugout.

Both sides had a number of opportunities to take the lead, with Leeds seeing a Tyler Roberts strike ruled out for an offside, while both Chelsea and Leeds would see the ball come back off the bar in the opening 45 minutes.

In the opening stages of the second half, summer signing Kai Havertz was only able to produce a tame effort following an inviting Hakim Ziyech cross, while Edouard Mendy produced a fine reaction save to deny his former Rennes teammate, Raphinha.

Games involving Leeds often result in goals at one end or the other, though ultimately, the quality in the final third was lacking from both sides, and speaking afterwards, Chelsea boss Thomas Tuchel was keen to see his side be ‘more precise’.

“We had enough chances to score,” he told Match of the Day. “It was an OK game, sometimes it is hard to score. It is not that you get what you wish for and we have to keep on working hard and be more precise in the opponents’ box.

“It was not so nice to play and the pitch is not in good condition – this is a factor. Our timing in the last 20 minutes – we need to be more clinical. We invest a lot against the ball so also we were tired when we arrived in good positions.”

Kai Havertz attempted more shots (4) and shots on target (4) than any other Chelsea player vs. Leeds.

He has as many shots on target as the entire Leeds team combined. pic.twitter.com/zGR57DxD9y

The German once again opted to play compatriot Kai Havertz in a central ‘false nine’ position, and while the former Bayer Leverkusen man squandered a few decent opportunities, Tuchel suggested it will be a role in which he is deployed more regularly.

“He is comfortable in high positions and he arrives in the box naturally,” he said. “Normally he has good finishing and normally the chances he had are enough to score. But unfortunately not today.”

Despite dropping points, overall the Blues boss was satisfied with what he saw.

“In general I am happy,” he said. “On a pitch like this against a team like Leeds who put a lot of pressure on you, we created good attacks and generally I am happy with the performance but we want to win. The boys are disappointed which is a good sign.”

Next up for Chelsea is their Champions League last 16 second leg against Atletico Madrid.