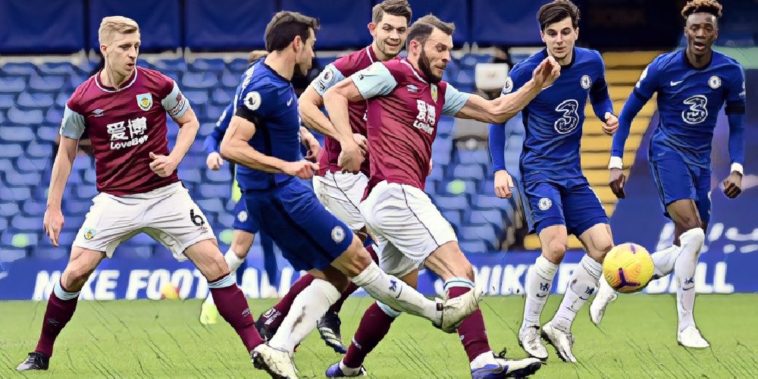 Chelsea got back to winning ways with a 2-0 win over Burnley, with both goals coming from defenders.

Thomas Tuchel made some eye-catching selections in his first game in charge against Wolves, and he did the same against the Clarets as he left summer signings Kai Havertz and Ben Chilwell on the bench.

Misfiring Chelsea forward Timo Werner was recalled having started the midweek game on the bench, though he squandered a whole host of opportunities to end his goal drought, one of which saw the German’s attempted shot being totally miss cued, the ball coming off the back of the striker’s leg.

After an even opening 20 minutes or so, the game developed into total domination from Tuchel’s side who frequently produced some tidy build-up play, with England international’s Mason Mount and Callum Hudson-Odoi particularly impressive throughout, although fellow England teammate Nick Pope was rarely tested as the Blues lacked a clinical edge in front of goal.

However, Chelsea did take the lead just five minutes before the interval, Hudson-Odoi driving at the Burnley defence down the right, before playing a lovely reverse pass to the rampaging Cesar Azpilicueta who hit the ball first-time past Pope.

Chelsea continued to dominate after the break, and despite lacking a clinical edge in front of goal, they finally doubled their lead with six minutes to play with a superb strike. Christian Pulisic put in a cross from the left to find wing-back Marcos Alonso who, with his back to goal, took a touch with his chest, took another with his knee, before swivelling and firing a thunderous half-volley past Pope to secure all three points.

The win moved Chelsea up to seventh, four points behind fourth-placed Liverpool, albeit having played a game more than the champions, and speaking after the game, new Blues boss Tuchel was pleased with his side’s overall performance.

“I was very pleased with the performance,” he told BT Sport. “It’s very important to have a win because it gives us a boost, it gives us the most confidence possible, otherwise, you always have to convince players that you are the right track if the results are not perfect – like the one against Wolves.

“Defensively and offensively, it was a very good performance. We controlled the match completely, we never lost intensity, we never lost focus and awareness because they play an unbelievable amount of long-balls all the time. They fight, [but] we were strong, and we deserved to win.”

He did, however, hope to see his side improve their end product, the German asked on his thoughts of both of Chelsea’s goals coming from defenders.

“It should be a signal to our guys up front that we needed two defensive players to score,” Tuchel added.

Marcos Alonso that is special 🤩

Chelsea's right-back opened the scoring, but it was the left-back who sealed the deal!

Any striker would be proud of that finish 🔥 pic.twitter.com/vKnPo4ScLA

Asked specifically about Werner’s struggles in front of goal, with the striker’s body language visibly displaying his lack of confidence, Tuchel said he hoped his fellow countryman could score a scrappy goal to get him back on the goal trail.

“He is not the only striker in the world who is sensitive when he does not score,” he said. “When he misses the feeling of scoring, no talks, no hugs, no warm words can make up for this feeling.

“Maybe we need a really stupid goal for him, a deflection or whatever, a silly goal to open up his last percentage.

“But as long as the guys work, and long they are reliable in their position and work rate for the team, we will push them, no doubt about it.”

Next up for Chelsea is a midweek London derby against former manager Jose Mourinho as the Blues travel to face Spurs at the Tottenham Hotspur stadium.