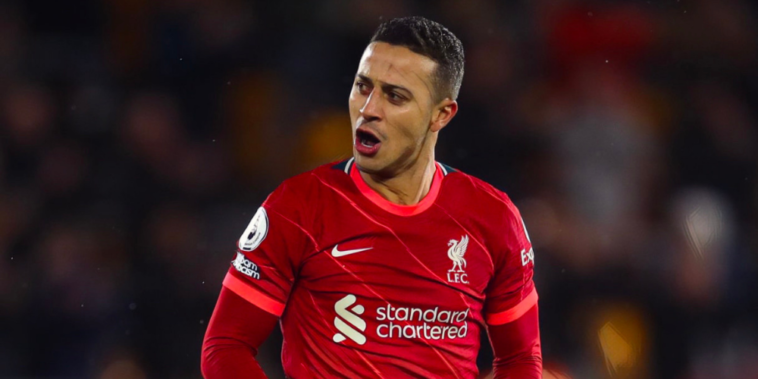 Thiago Alcantara says he is relishing an ‘exciting’ month ahead with Liverpool as the Reds prepare for a defining run of fixtures in their season.

Jurgen Klopp’s entered the international break having won nine consecutive Premier League fixtures, a run of results that has seen Liverpool move within one point of leaders Manchester City.

Liverpool face Watford in the Premier League on Saturday lunchtime, the first in a congested run of fixtures that will have major consequences on their season.

The Reds will also meet Benfica in the Champions League’s quarter-finals in April, alongside two huge clashes with Manchester City, facing Pep Guardiola’s side in the league and FA Cup semi-finals.

Thiago has discussed his excitement ahead of a huge run of games and says each game will represent ‘a final’ for Liverpool as the club pursue major silverware.

“The other day I was talking with some friends about it and I never had, in the years that I have been involved in football, I never had a month so exciting like this with such important and exciting matches every three days. So it will be amazing,” he told Liverpoolfc.com.

“Well, it’s not the most exciting month of my career [but] for sure it is exciting because you are competing against the best, in the best competitions as well, but also because it reminds you that we are in finals.

“It looks like a World Cup, a European Cup, where every game is a final. With that we are in a one-mission mood and we are there.”

Liverpool remain in pursuit of four trophies this season, having won the Carabao Cup in February after beating Chelsea at Wembley.

Thiago believes that win has increased confidence around Anfield as the Reds look to end the season with further silverware.

“Sure, I think the Carabao Cup gave us much more confidence than we had before. We had high stakes to win the final, we won it and the guys were incredibly happy and confident as well with the performance, with the whole tournament that we made. But also it is important to arrive in this moment of the season and be ready for the finals that we have.”