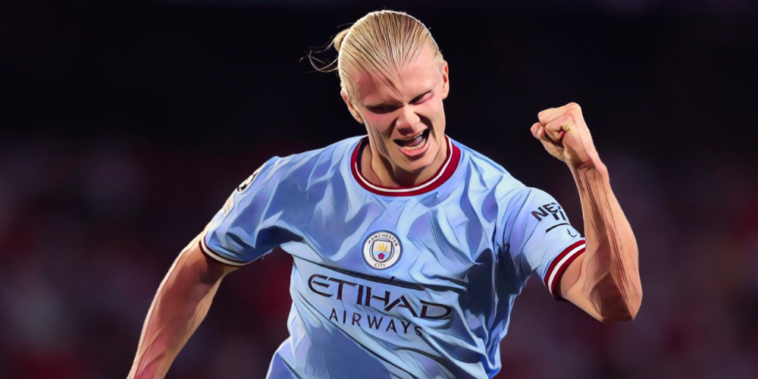 The evolution of the modern-day Premier League striker has come full cycle this season as pure centre forwards have been terrorizing defences in the 2022-23 season.

The constant influx of quality defenders and advanced tactical setups in the most intense football league in the world has forced managers to rely on pure finishers for goals. Therefore the likes of Erling Haaland and Darwin Núñez have been imported to add their specialty to a very demanding championship.

So who are the outstanding top strikers in the Premier League? We sought the help of online sportsbooks to bring you the best five this season.

After overseeing a £51.2 million transfer, Manchester City have no doubt won the lottery with the best number nine at the moment.

The 22-year-old has played only eight Premier League games this season but has already hit the net 14 times, scoring at a staggering ratio of 1.89 goals per 90 minutes.

Defenders have struggled in vain against Haaland’s burly build, speed, aerial ability, strength and decisive touch as he managed to become the first player in Premier League history to score three consecutive hattricks at home, following his latest treble in his first Manchester Derby.

This goal scoring ratio has never been seen in the English top-flight and the Norwegian will finish the season with around 60 non-penalty goals if he keeps up this rate.

There is every reason to think he might do it.

Haaland is now the quickest player in Premier League history to score three hat-tricks, doing so in 40 games less than Michael Owen’s previous record of 48 games in 1998.

The 2020 Golden Boy Award winner is on course to smash several goalscoring records which in fact makes one wonder if he can reach Lionel Messi’s record of 82 goals in 2011-12.

City’s number nine looks absolutely unstoppable in the Golden Boot chase which has become a one-horse race as he sets sights on breaking the record for most goals scored in a 38-game Premier League season, set by Mohamed Salah in 2017-18.

The three-time Premier League Golden Boot winner and one of the best strikers in the world for the last few years is back to his prolific best, after a couple of seasons with the license to create.

Antonio Conte’s Tottenham are playing as a solid unit which is designed to provide Kane with lots of opportunities in the opposition box, thus he has already scored seven Premier League goals in 2022-23.

The England captain extended his record tally in North London Derbies to 14 goals, as he also became the highest-ever goalscorer in London derbies with 44 goals, one ahead of Thierry Henry.

Kane is the third-highest all-time top goalscorer in the league and is relishing his primary role this season as a finisher. His second goal of the campaign against Wolves made him the first player to score 185 Premier League goals for a single club. The 29-year-old may have lost the Golden Boot race to Haaland already, but a fully-fit Kane is expected to run the Man City man the closest due to his sheer quality.

The Brazilian picked Arsenal’s call in their desperate need for a striker in a deal worth £45 million over the summer, and what a signing he has proved.

The 25-year-old’s dream start to his Arsenal tenure has seen them rise to the top of the table as only City have scored more goals so far. His movement, dribbling, creativity, finishing, and work ethic have made a huge difference for the Gunners and the player is set for new heights in a red and white jersey.

Jesus has so far registered five goals and three assists for the Emirates side and his adaptability in attack is bringing the best out of his teammates.

In the form of his life and playing as the team’s undisputed number nine, Gabriel Jesus has well and truly earned his place as one of the Premier League’s top five strikers.

The 28-year-old continued where he left off after a record-breaking goalscoring season in the EFL Championship. He scored both goals in a 2–2 draw against Liverpool on opening day and hasn’t looked back since.

Mitrović has brought his typically unusual blend of brute physical strength, aerial ability and the clinical finishing of an old-fashioned centre-forward. Crucially, he is the focal point of Marco Silva’s attack and that trust has seen him beat his goal tally from the entire 2020–21 season (four goals) in his first four games.

The Serb has been a surprise top performer so far this season as he finds himself third in the early Golden Boot rankings, with only Haaland and Kane scoring more than his six goals.

The Bees striker has kicked on in his second Premier League season and earned a first call-up to the England national team in September.

Toney is a constant threat to defenders who continues to lift his game wherever he finds himself. After leading Brentford back to the top-flight, he scored 12 goals as they earned a 13th-placed finish to prove himself a quality Premier League striker.

Toney has so far hit five goals in 2022-23 including a stunning hat trick in a 5–2 victory over Leeds United; taking him to over 50 goals for the club as well as his firsts from outside the box since joining Brentford. This 26-year-old continues to improve his game.