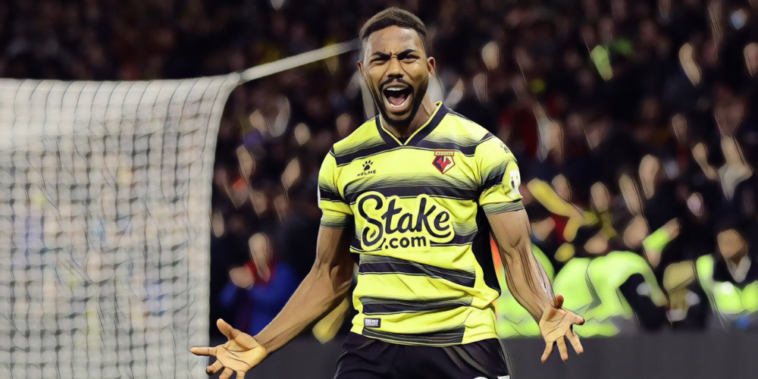 Emmanuel Dennis has enjoyed a brilliant start to the season for Watford, the forward fast emerging as one of the shrewdest signings of the summer transfer window.

The Nigeria international was signed from Club Brugge for an initial fee of just £2m, but has already provided 10 goal involvements in just 12 league appearances for the Hornets, with only Mohamed Salah having produced more across the division so far this season.

Dennis has reached five goals and five assists in quick-fire fashion during the 2021/22 campaign, joining an elite group of names to have reached 5+ for each metric in the fastest time.

Here are the six Premier League players to reached five goals and five assists in the fewest games.

Dennis has started the current season in spectacular fashion despite Watford’s battle for results, hitting five goals and five assists for the Hornets.

The 24-year-old has remarkably been directly involved in 66% of Watford’s 18 goals this season, his contribution having ensured the newly-promoted side remain outside the Premier League’s relegation places at present.

Only two players have scored 5+ goals and provided 5+ assists in the Premier League this season:

Dennis scored one and created another in the opening day win over Aston Villa, whilst he has played a crucial role in convincing wins over Everton (1G, 2A) and Manchester United (1G, 2A) already this season.

With Watford having reduced the wasteful spending of recent campaigns, his arrival from Brugge has proven one of the bargain buys of the Premier League season.

Jurgen Klinsmann arrived into the Premier League with more than his fair share of sceptics, the World Cup-winning forward deemed a diver and cheat by the English media.

He immediately turned critics into admirers with his combination of endearing persona and clinical touch around goal, scoring on his debut for Tottenham in a thrilling 4-3 win at Sheffield Wednesday.

The start to the 1994/95 #PL season had its share of drama…#ThrowbackThursday pic.twitter.com/loQWB7HHQr

The goals continued to flow for the Germany international, whilst he also racked up five assists across his opening 12 games in the Premier League.

Klinsmann’s performances saw him named as the FWA Footballer of the Year during his debut season in English football, with the forward having scored 30 goals across all competitions for the north London side.

He departed at the end of the season to join Bayern Munich, though later returned for a short loan spell at Spurs, scoring prolifically to ensure the side avoided an ignominious relegation.

Arjen Robben’s career with Chelsea contained both success and frustration with injuries, though the talented Dutchman enjoyed a flying start to his career with the club after arriving from PSV Eindhoven.

Chelsea had beaten Manchester United to the signing of the winger from PSV, an investment that proved inspired as Robben made a quick-fire start at Stamford Bridge.

Robben made his debut in October 2004 after missing the season’s opening months through injury, providing an assist on his second appearance in a 4-1 win at West Brom.

His first 11 games for Chelsea saw the winger score five goals and provide six assists, as Chelsea ended the season as champions for the first time in half a century.

Robben added a second league title under Jose Mourinho the following season, before spells at Real Madrid and Bayern Munich.

He enjoyed his greatest successes with the latter, scoring over a century of goals and winning eight Bundesliga titles and the Champions League during a trophy-laden period in Bavaria.

Arjen Robben: The ‘one-trick pony’ who couldn’t be stopped

Cantona reached five goals and five assists in just 11 games during the 1992/93 season, including scoring the first ever Premier League hat-trick as Leeds thrashed Tottenham 5-0 at Elland Road.

Cantona ended the season as a Premier League title winner, though only after a cross-Pennines transfer to Manchester United that proved the catalyst behind the Red Devils’ drought-breaking success.

The Frenchman finished the season with 15 goals and a league-leading 16 assists for both teams combined, with Sir Alex Ferguson’s side beating Aston Villa and Norwich to the title to win a first top-flight championship in 26 years.

Andrey Arshavin’s career with Arsenal was one of bright moments and frustrating inconsistency, outstanding on his best days and anonymous on other occasions.

Arshavin signed for the north Londoners from Zenit St Petersburg during the 2009 January transfer window, having played a starring role during Zenit’s UEFA Cup success the previous season and Russia’s run to the semi-finals of Euro 2008.

The Russian registered his first assist in his third appearance against West Brom, before bursting into life with two assists and a goal against Blackburn in the following fixture.

The highlight of his opening months at Arsenal was undoubtedly an electric display against Liverpool, however, the forward scoring four goals in a thrilling 4-4 draw at Anfield that derailed the Merseysider’s title challenge.

He provided 14 goal involvements (6G, 8A) in just 12 appearances following his mid-season arrival, but was unable to maintain those standards across the course of his four-year spell with the Gunners.

No player has ever reached five goals and five assists in the Premier League faster than Bruno Fernandes, the midfielder making an instant impact after signing for Manchester United in 2020.

After making his debut in a goalless draw with Wolves, Fernandes went on a remarkable run of productivity around goal, registering six goals and five assists in just nine games.

The Portugal international maintained those standards across the remainder of the season, finishing with 15 goal involvements from just 14 games, with the Red Devils remaining unbeaten following Fernandes’ winter window arrival from Sporting Lisbon.

His signing proved the catalyst behind an upturn in form as a struggling side secured a top-four finish and Champions League qualification.