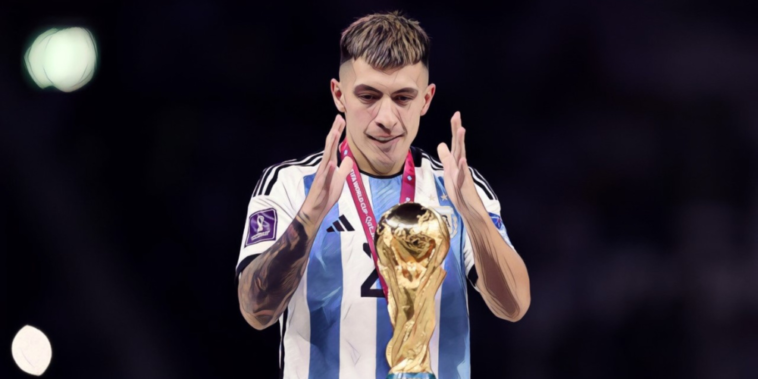 Lisandro Martinez returns to Manchester United this winter as a World Cup winner, having played his part in Argentina’s victorious campaign in Qatar.

The defender becomes just the fifth man to have won the World Cup while at Old Trafford and following his achievement we look back at the names to have achieved the feat.

Here are the five players to win the World Cup while playing for Manchester United.

Bobby Charlton became an iconic figure for club and country, starring for the great Manchester United and England sides of the 1960s.

Charlton had a central role in the Three Lions’ triumph on home soil at the 1966 World Cup, as he scored three goals for Alf Ramsey’s side. He netted the opening goal during the crucial group stage win over Mexico, before producing a superb performance against Portugal in the semi-finals.

The midfielder scored both goals in a 2-1 win over the Portuguese and started the final win over West Germany at Wembley. His performances at the tournament saw Charlton named as winner of the Ballon d’Or in 1966, becoming just the second Englishman – after Stanley Matthews – to win the award.

🗣️ “He could shoot from Manchester and score in Rio de Janeiro!” said @Pele.

Charlton later inspired Manchester United to European Cup success in 1968, as the Red Devils became the first English club to be crowned champions of Europe. He scored twice in the final win over Benfica and ended his career with the club having scored 249 goals in 758 appearances.

His international career concluded after 49 goals in 105 caps, with only Wayne Rooney and Harry Kane having ever scored more for the Three Lions.

Nobby Stiles was a teammate of Charlton’s for club and country during the sixties and played every single minute of England’s triumphant 1966 World Cup campaign.

The midfielder was credited with his shut-down role on Portugal’s Eusebio in the semi-final and produced one of the lasting images of the final, as he danced in celebration on the Wembley pitch with the World Cup trophy in one hand and false teeth in the other.

Stiles won just 28 caps for the Three Lions, the lowest number among their World Cup-winning vintage. At club level he made 395 appearances for Manchester United in all competitions, where he won league titles in 1965 and 1967 and the European Cup in 1968.

The Manchester-born midfielder later had short spells at Middlesbrough and Preston, where he took on a player-coach role under former teammate Charlton at the latter.

The winger – who won top-flight league titles with both Burnley and Manchester United – featured in the first game as the host nation played out a goalless draw with Uruguay at Wembley. A tactical change saw Connelly dropped for the remainder of the tournament and he did not make another appearance.

The stalemate with Uruguay proved his last international appearance for England, ending his career with seven goals in 20 caps for the Three Lions.

Following the World Cup, he left Manchester United to sign for Blackburn Rovers in a deal worth £40,000.

It took more than five decades before another Manchester United player won the World Cup.

Paul Pogba shone as France were crowned world champions in 2018, forming part of a midfield axis alongside N’Golo Kante that was the driving force of Les Bleus’ campaign in Russia.

His shot deflected off Aziz Behich for an own goal to hand France an opening win against Australia in the group stage, before Pogba scored in the 4-2 final win over Croatia.

The midfielder’s performances for France were in contrast to his often inconsistent displays at club level, with Pogba having largely flattered to deceive since moving to the Premier League in a then-world record £89m deal from Juventus.

He spent six seasons with the Red Devils and made 226 appearances in all competitions, before departing to re-join Juventus on a free transfer in 2022.

Lisandro Martinez became the fifth man to win the World Cup while a Manchester United player, having played his part in Argentina’s triumph in Qatar.

The centre-back signed for Manchester United in a £57m deal from Ajax last summer, having won the Dutch side’s Player of the Season accolade in 2021/22. Despite some initial doubts from some, Martinez has become a fans’ favourite for his committed performances in the Premier League and has shone as a ball-playing centre-back for Erik ten Hag’s side.

He made five appearances – including two from the start – in Argentina’s World Cup campaign, as the South Americans were crowned world champions for a third time.

Lionel Messi scored twice in a thrilling final with France that was decided on penalties, though Martinez was an unused substitute for the decider.