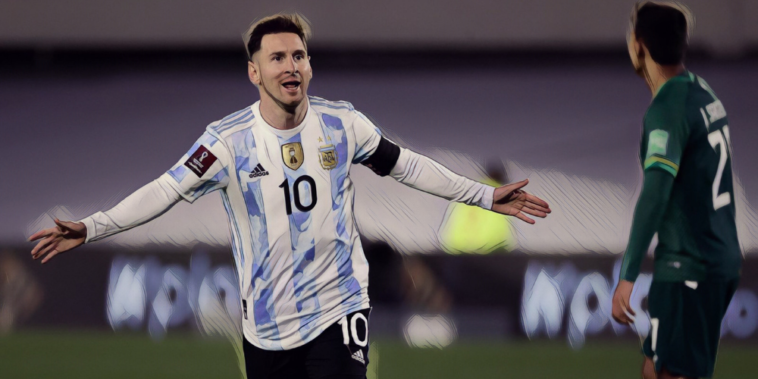 Lionel Messi continues to set new records, having moved clear as the highest-scoring South American in international football history after scoring a hat-trick in Argentina’s 3-0 win over Bolivia this week.

The feat continues an unforgettable year with the national side for Messi, who was the inspiration behind La Albiceleste’s Copa America triumph this summer, ending a 28-year wait for a major trophy and his personal pursuit of honours with Argentina.

Ronaldo Nazario burst onto the scene as a teenage talent in Brazil, his potential of such standard that he was included in the national side’s squad for their victorious 1994 World Cup campaign as a teenager.

Ronaldo failed to take to the pitch at US ’94, but over the following years established himself as the most exciting talent on the planet.

The forward was sensational as Brazil won the 1997 Copa America, being named as player of the tournament after combining in sublime fashion with compatriot Romario – scoring the decisive goal in the final win over Bolivia.

He was electric once again as Brazil reached the final of the World Cup the following summer, but a seizure on the eve of the showpiece prevented him from making the desired impact.

Redemption came in 2002 as a Ronaldo-inspired Brazil lifted their fifth World Cup trophy, the forward finishing as the leading scorer in the competition with eight goals, including both in the 2-0 final win over Germany.

Ronaldo retired as the leading scorer in World Cup history with 15 goals – since eclipsed only by Miroslav Klose – and with a record of 62 goals in 98 appearances at international level.

But for the injuries that decimated his mid-career and impacted its latter period, who knows what O Fenômeno could have truly achieved.

Arguably the greatest Uruguayan footballer of all time, Luis Suarez ranks fourth amongst the highest-scoring South Americans of all time.

Suarez was sent off on his debut for Uruguay in 2007, but has since spent more than a decade as the focal point of the national side, scoring 64 goals in 125 international appearances.

He formed part of the side that reached the semi-finals of the 2010 World Cup, memorably aiding his side’s passage to the last four with a goal-line handball against Ghana, with Asamoah Gyan missing the resulting penalty.

Neymar has divided opinion throughout his career, but Brazil’s brightest talent continues to climb the goalscoring rankings in international football.

Neymar netted on his debut for Brazil as an 18-year-old and has since developed into his nation’s key figure, ranking second for goals scored and fourth for appearances with 113 international caps.

His finest moment arguably came outside of his 69-goal total after inspiring the Selecao to Olympic Gold on home soil in 2016, with Neymar scoring the decisive spot-kick as Germany were beaten on penalties in the final.

Question marks remain over his legacy given his inability to influence a World Cup or Copa America, but at 29 the Paris Saint-Germain forward has time to produce a defining tournament performance and cement his status as one of Brazil’s finest.

The man Neymar is bidding to catch for Brazil and the iconic figure Messi surpassed this week, Pele is a footballing figure that needs no introduction.

Football’s original boy wonder, Pele became the youngest player to win the World Cup after forming part of Brazil’s 1958 vintage as a 17-year-old, scoring a hat-trick in the semi-finals against France and two more in the final win over host nation Sweden.

Brazil had never previously won football’s most coveted trophy, but at the time of his retirement were three-time winners with Pele having played an instrumental role in their hat-trick of triumphs.

He remains the only player to have won the World Cup on three occasions and the record scorer in Brazil’s history, his 77 goals coming across just 92 appearances.

Even as eras become increasingly more difficult to compare, Pele remains one of the most iconic figures in the history of the game.

Lionel Messi’s career has been one of record after record, his hat-trick against Bolivia taking the Argentina captain beyond Pele as South America’s most prolific player.

Messi’s career with the national side has not always been as straightforward as his incredible success at club level, but 2021 has proven a year to cherish after ending both his and Argentina’s long wait for success.

His performances in the Copa America were nothing short of extraordinary as he led Argentina’s charge, finishing as both the leading goalscorer and assist provider in the tournament.

Messi was also named as the best player at the 2014 World Cup as his side finished as runners-up, one of four major final defeats before their Copa America triumph this summer.

Opinion will rage on who is genuinely Argentina’s greatest talent, but in Messi and Diego Maradona the South Americans have produced two players who often made the impossible a reality.