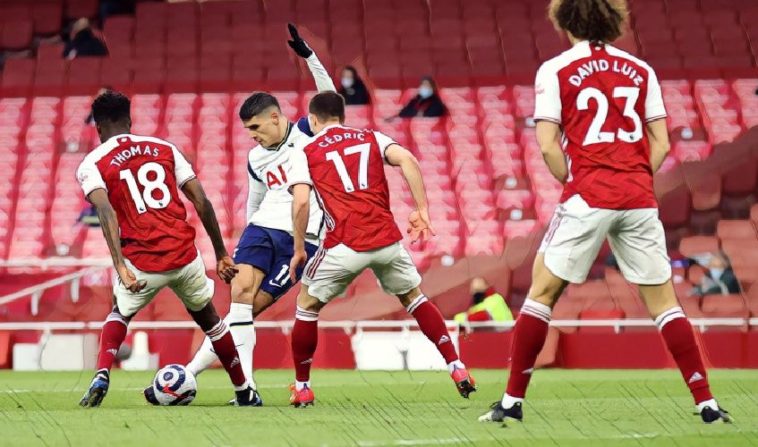 Erik Lamela wrote himself into the Premier League history books during Sunday’s north London derby, though perhaps not quite for the reasons he would have wanted.

Lamela was on course to be the hero for Tottenham after coming on as a first-half substitute to replace the injured Son Heung-Min, opening the scoring with a moment of magic at the Emirates.

The Argentina international’s sublime Rabona goal will be remembered as a mere footnote, however, as Arsenal came back to secure victory at the Emirates.

Spurs’ hopes of salvaging a point were all but ended following Lamela’s second yellow card for a wayward arm, an incident which saw the 29-year-old become one of just five substitutes to both score and be sent off in a Premier League fixture.

Following his unique piece of history, we revisit the goalscoring substitutes to see red:

The first incident of a goalscoring substitute receiving his marching orders came early in the Premier League’s second season, with Chelsea defender David Lee dismissed in a 1-1 draw with Sheffield Wednesday at Stamford Bridge.

The centre-back was introduced after only eight minutes in place of Andy Myers, before Mark Bright opened the scoring for the visiting Owls just four minutes later.

Lee – who scored just 11 goals during a decade as a Chelsea player – then provided an unlikely avenue back into the contest with an equaliser before the interval.

The defender picked up a booking on the stroke of half-time and it would prove a costly one, as he was dismissed for a second yellow card as 10-man Chelsea held on for the final 22 minutes to secure a point.

West Ham and Fulham played out an enthralling clash during the 2006/07 season, the two sides sharing six goals in a fixture which saw Bobby Zamora become the second goalscoring substitute to be sent off.

Zamora was introduced after just 13 minutes following an injury to Carloz Tevez, with the substitute scoring an equaliser for the Hammers – the 100th league goal of his career – following Tomasz Radzinski’s opener for Fulham.

West Ham twice regained the lead in a topsy-turvy affair before Zamora’s harsh sending off for a sliding challenge, a decision which would cost the relegation-threatened Hammers as Philippe Christanval snatched a dramatic late equaliser at Upton Park.

The most dramatic of interventions for Ivan Klasnic as Bolton snatched a late win against Stoke in 2010, the Croatian forward at the centre of the late action in a thrilling conclusion.

Klasnic arrived into the game with 13 minutes remaining and the game finely poised at 1-1, the decision vindicated for Owen Coyle as the star smashed home a stoppage-time winner.

Gretar Steinsson’s long throw found its way to Klasnic as Stoke failed to clear their lines inside the penalty area, the forward turning sharply before scoring a dramatic winner with just seconds remaining.

There was, however, time for the substitute to be sent off after picking up two bookings in quick-fire fashion, the first for an altercation with Dean Whitehead before receiving red for a foul on Robert Huth.

West Brom opened the 2017/18 season with successive Premier League victories, the second of which came following a hard-fought 1-0 win at Burnley.

It took the introduction of Hal Robson-Kanu to spark a dreary game into life, the Wales international replacing James McClean before putting his side ahead just seven minutes later.

Robson-Kanu’s goal was remarkably the first shot on target in a lifeless encounter at Turf Moor, the forward scoring a brilliant individual goal as he held off two challenges before firing beyond Tom Heaton.

The Welshman’s afternoon soured following a red card seven minutes from time, however, an over-exuberant challenge seeing the star catch Matt Lowton with a wayward elbow and head for an early bath.

Lamela became just the fifth substitute to score and be sent off this weekend, following his introduction into the north London derby after Son Heung-Min limped off with a hamstring injury.

The Argentina international’s goalscoring cameo looked set to immortalise him in NLD history after the winger produced a genuine piece of brilliance to open the scoring, executing an implausible Rabona effort which flew through the legs of Thomas Partey and into the bottom corner.

That wasn't even Lamela's best goal from a rabona 😮pic.twitter.com/IsNWC9njxM

Spurs, however, were second best for much of the contest and Arsenal fought their way ahead courtesy of an equaliser from Martin Odegaard and an Alexandre Lacazette penalty, the frustration of the visitors spilling over with Lamela receiving two second-half yellow cards.

The winger picked up his first caution for a late sliding challenge, before catching Kieran Tierney in the face with an arm as he sought to hold off a challenge from the Scotland international.

Lamela’s early exit contributed to a defeat which is a huge setback to Spurs’ hopes of a top four finish and Champions League qualification.