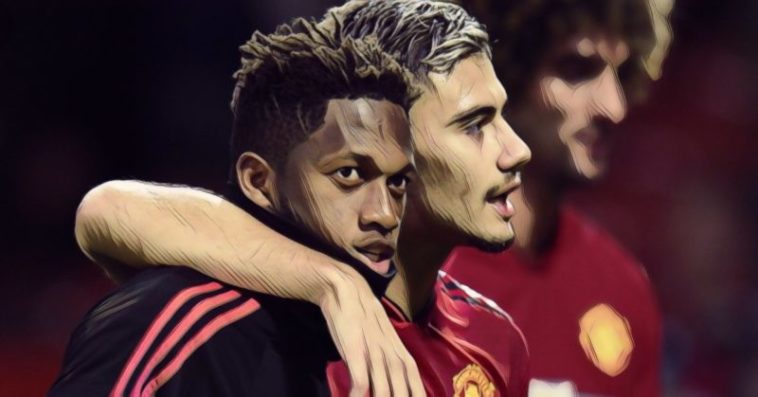 For the last several years, Manchester United’s midfield has been a puzzle that the many managers who have coached the club in the post-Ferguson era have been unable to solve.

This issue became even more pronounced during the tenure of Jose Mourinho and after the arrival of Paul Pogba. The Frenchman is unquestionably a uniquely gifted midfielder, yet Mourinho was never able to accommodate Pogba within the system he wanted to adopt and with the players at his disposal.

This is a problem that has carried over into Ole Gunnar Solskjaer’s reign and the Norweigan will have to attempt to solve it without any new arrivals this summer.

With Marouane Fellaini and Ander Herrera departing in the last six months, Solskjaer is potentially short of options and versatility in midfield, further compounding the former striker’s struggles in attempting to find a suitable midfield balance.

Luckily, in Andreas Pereira and Fred, Manchester United possess two, largely untapped assets that could add the necessary energy, dynamism, and creativity to the Red Devils midfield that has been lacking in the squad for so long.

In the 17/18 season, Fred was a central cog in Shakhtar Donetsk’s impressive season in which they retained their domestic title and beat Napoli and Manchester City en route to the Champions League knockout stage.

Fred played in a midfield pivot in a possession-based 4-2-3-1, where he was tasked with receiving the ball from the centre backs and progressing possession to attacking players whilst under pressure from the opposition. He was excellent at receiving the ball under pressure, and through penetrative passing and dribbling, breaking the opposition press and finding attacking players who had dropped off in between the lines.

This allowed Shakhtar to build attacks smoothly and bypass pressure without having to resort to aimless long balls. In defence, Fred was highly energetic and a willing defender, averaging 2.9 tackles and 1.1 interceptions per 90 in the Champions League during the 17/18 season. While he doesn’t have the defensive skill set to be a nominal defensive midfielder, Fred is a capable box-to-box man with excellent technique and composure.

He struggled to adapt to life at Manchester United, and it’s not hard to see why. Jose Mourinho gave him limited game time, he arrived in a turbulent period with lots of negativity surrounding the club, and had to adapt to English football.

This adaptation period was made even more difficult due to the type of player Fred is. His role for Shakhtar is difficult to perform due to the risk involved, for if he misplaces a pass under pressure, it leaves his team exposed defensively. This is perhaps one of the reasons Mourinho claimed that United were not strong enough defensively to accommodate Fred.

Yet in the latter stages of the season, Fred did start to show his quality in games against Crystal Palace, Arsenal, and most notably the 3-1 win against PSG. He began to demonstrate his ability to retain the ball under pressure and initiate attacks. With the additions of Harry Maguire and Aaron Wan-Bissaka and the continuing improvement of Scott McTominay as a central defensive midfielder, Fred should have the conditions to succeed at United should he be given the opportunity.

There is the obvious possibility that he is simply unable to adapt to the Premier League, but he has displayed too much talent to not give him a fair chance at regular first-team football. This is especially true when one considers the fact that his ability to resist opposition pressure, progress attacks through direct passing, and energy in pressing and defending are traits that United desperately need in midfield.

Should Solskjaer maintain a 4-2-3-1, Fred could be used alongside McTominay with Pogba in a more advanced role, and should he move to a midfield three Fred would operate well on the right-hand side of it. Whether he will fulfill his potential is unknown, but Fred certainly deserves the opportunity to do so.

After breaking into the first team under Louis van Gaal, Andreas Pereira has failed to cement himself as a first-team regular for Manchester United. An academy graduate, Pereira quickly won over the hearts of many United fans in the short time he was given, as his technical prowess was abundantly clear.

His only period of consistent first-team football was at Granada during the 16/17 season, where he was one of the club’s best players despite the fact that they were relegated. At Granada, Pereira scored five goals and assisted thrice in 35 La Liga appearances, which while commendable given his age and the quality of his teammates, only tells part of the story.

Despite playing predominantly as a left-winger or attacking midfielder, Pereira averaged 1.2 tackles per 90 and 0.9 interceptions per 90, demonstrating his impressive work rate. Offensively, he averaged 1.5 key passes per 90, 2.1 dribbles per 90, 2.1 shots per 90 (1.7 of which we outside the box), 0.9 crosses per 90, and 0.7 accurate corner passes per 90. These statistics indicate that Pereira performed excellently as a hard-working, creative presence who could also pose as a goal scoring threat.

The wide array of attributes Pereira demonstrated at Granada should be utilised at Old Trafford. He started in United’s first league game against Chelsea, where he recorded an assist in their 4-0 victory. Pereira started as a number ten, but often drifted towards the right flank as Lingard’s inward movement created space out wide. This could be a fruitful tactical component of United’s play – as shown by his assist for Anthony Martial’s goal – because of the skill set of other players in the squad.

Aaron Wan-Bissaka, while a superb defensive right back, is still developing his attacking game, while Jesse Lingard is not a natural right-winger and excels at making incisive runs and linking attacks in more central areas. As such, it makes sense that Solskjaer would employ a setup that places less attacking responsibility on Wan-Bissaka and gives greater license for Lingard to operate centrally while also ensuring that natural width is still provided to stretch teams and create chances from wide areas. Pereira, with his crossing and dribbling ability, enables such a system to function.

This kind of cohesiveness in which different players in the squad complement one and other and are able to maximize each other’s strengths are integral to successful sides and shows the intelligence of top coaches who allow their players the capacity to increase their individual output within the framework of an overarching system.

Should United move to a midfield three, Pereira could perform a similar role in a slightly deeper position and with greater defensive responsibility, given that he has demonstrated he is willing to assist the team defensively. Pereira also gives United consistent and reliable set-piece delivery. With the likes of Harry Maguire, Scott McTominay, Paul Pogba, and Victor Lindelof, United have a number of tall, physical players who could pose a threat from set-pieces should they be provided with better delivery. This is another way in which Pereira could add to United’s attacking play.

Creative, dynamic, and energetic, both Fred and Pereira deserve a chance, as they can provide Manchester United with the qualities they have needed in their midfield for so long.

Read: Penalty debate and racist abuse aside, are things looking up for Man United?