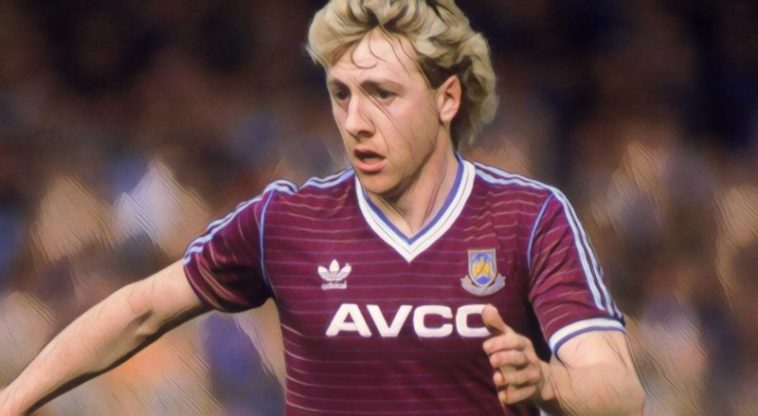 On an autumnal day in 1985 Martin Tyler then ITV football correspondent sat in the offices of The South Bank Television Centre staring out at the river Thames.

Tyler was awaiting the arrival of a young footballer to take him for a stroll across the road to Waterloo Bridge for a TV interview with a difference.

Ninety minutes later his guest had been standing on the bridge for over an hour with passers by being asked by Tyler and his crew, ‘can you name this footballer?’.

Both locals and tourists looked the man up and down giving Tyler a bemused reply ‘No’, as they continued with their daily toil.

As Tyler and guest returned to the Television studios, comedian Billy Connolly appeared through the revolving doors.

Tyler and the crew greeted him with a smile and posed the same question to Billy. The Scot took one look at the handsome young man with flowing blonde locks ‘That’s one of us… Frank McAvennie’ came the reply.

McAvennie had swapped the weaving town of Paisley for London lights, moving that Summer from St. Mirren to West Ham for the princely sum of £340,000.

Most who blew bubbles on the old ‘Chicken Run’ terrace, were also left scratching their heads about the Scottish attacking midfielder… ‘Frank Who?’.

As the sun shone that August day and the air was filled with the smell of freshly cut grass, the football season kicked off. The ‘Hammers’ headed to the Midlands to face Birmingham City in their first game.

John Lyall’s men lost 1-0, a poor start confounded by talisman Paul Goddard breaking his leg, a huge blow to a team with little, or no strength in depth.

However, arise ‘Sir Frank’ of St. Augustine’s School, Milton Glasgow; with Tony Cottee by his side, who had scored seventeen goals the previous season, and a precocious talented right-winger named Mark Ward who had arrived from Oldham Athletic and would service both men with tempting centres.

By three twenty-four on August 20th, the Boleyn Ground knew his name, Cottee sent in a deliberate low cross which McAvennie finished with aplomb, the ball fizzing past Hucker in the QPR goal.

McAvennie the attacking midfielder had become super striker, as the clock struck the sixty-sixth minute a love affair with the claret and blue faithful began, as Frank notched a second, racing onto an Alan Dickens header and stroking the ball home second time round, after Hucker had saved his initial attempt.

As American band Sister Sledge raised up the charts with their hit ‘Frankie’, the East End version was helping West Ham on their own ascent as they climbed up the league table, helped by the blonde bombshell’s goals.

The champions arrived at Upton Park at the end of August as McAvennie repeated the dose with another brace, as a shell-shocked Liverpool returned to Anfield glad of a draw.

McAvennie scored in his next three games notching up eleven goals as the leaves began to fall from London trees.

By November, seventh place in the league turned to third as McAvennie continued his goalscoring streak, and as the Christmas bells began to chime West Ham were on an eighteen-game unbeaten run. With the London Press calling Frank and his colleagues ‘the best team in the land…’.

However, unless you were a Boelyn regular or travelled the highways and byways of the UK to support the claret and blue alongside the feared West Ham Inter City Firm; you would never have seen one of Macca’s great goals.

The West Ham revolution was not being televised, as that season, football and the TV companies were at logger heads.

That year the powers that be were under the impression that the television box would ruin football, it was envisaged that the idea of live English football in British homes would reduce numbers going through the turnstiles, meaning a negative impact on football.

The TV companies had put a £19 million deal over four years on the table, however, the broadcasters were demanding more live football and reduced highlights; whereas the white collars of football wanted increased highlights, leading to an impasse which meant no Frank McAvennie on the telly.

As Frank notched up his eighteenth goal that December, revolution was in the air with talk of a breakaway ‘super league’ with the reduction of the twenty-two-team top-flight and the introduction of play-offs.

However, as Regent Street turned on their Christmas Lights both parties came to their senses and agreed a reduced deal of £1.9million for nine First Division and League Cup games, with a separate deal for the FA Cup, peanuts compared to today’s value.

Within four years Rupert Murdoch would launch Sky television with the Australian’s firm focus on getting football rights.

As parliament’s landmark clock tower ‘Big Ben’ rang in the year of 1986, the cameras were rolling at Selhurst Park, as Frank left the away dressing room to make his bow in the oldest cup competition in the World.

As BBC’s John Motson announced to the watching public ‘we have new names and new faces to learn today… one of those Frank McAvennie’… it was not long before the blonde-haired centre forward took centre stage.

Motson from his place in the clouds and the thirteen thousand spectators watched on as McAvennie latched on to a miscue by Charlton defender Humphrey to loop the ball goalwards over the despairing Nicky Johns.

As the ball inched towards the net Cottee prodded it home in front of the jubilant West Ham fans behind the goal.

Those watching from the comfort of their homes knew his name now, as well as fighting for the title the Eastenders were on the march towards Wembley way.

A fortnight later, on the 18th of January, as Britain and France were discussing plans to construct a ‘Channel’ tunnel, Frank walked under the ‘This is Anfield’ sign as West Ham faced Liverpool in a top of the table clash.

West Ham held their own against the champions on a cold winter’s day, ‘Frankie’ finding his feet on the hallowed turf.

However, the claret and blue succumbed in the fifty-eight minute when Liverpool were awarded a penalty. The rotund Dane Jan Molby despatched the spot-kick giving Liverpool the lead, with the Scousers suddenly finding their groove with goals from Ian Rush and Paul Walsh following.

Alan Dickens who had turned down Dave Sexton and Manchester United for the charms of his local East End club, scored a consolation goal for the ‘Hammers’.

The loss at Anfield was only a short set back as in February West Ham took the scalp of high-flying Manchester United at Upton Park 2-1, with goals from Ward and Cottee.

After a dry spell in February McAvennie found his goalscoring touch in March, netting in three league games including a master class at the Bridge against Chelsea.

There he struck a right footed shot into the top right-hand corner of the net in front of the Shed end to complete a four-nil rout, celebrating with knees in the air ala fellow Scot Charlie Nicholas.

In April as the House of Commons turned their noses up at the Governments ‘Sunday Shopping’ bill, West Ham embarked on a run of winning games with eight out of nine victories, including their best performance of the season thumping Newcastle 8-1 with McAvennie on the scoresheet.

As the month closed out West Ham were lying in third place four points behind Liverpool with a game in hand and on the cusp of glory.

The East End outfit would face lowly West Bromwich Albion at the Hawthorns on the last Saturday of the season and their game in hand would be against Everton at Goodison Park on the Monday night.

On the 3rd of May, Frank and his adoring fans around Green Street headed for the West Midlands, knowing if fellow title challengers Liverpool lost at Chelsea and Everton failed to win at home versus Southampton, the Eastenders would be crowned champions.

McAvennie followed the script as he opened the scoring in a 3-2 victory, however on the radio transistors in the away end news filtered through Liverpool player/manager Kenny Dalglish had scored to give Liverpool a 1-0 victory. The title had been snatched from West Ham, as Frank sat in the dressing room that day he wondered about what might have been.

The ‘Hammers’ fulfilled their last fixture, in essence, a play-off for second place, but they lost out 3-1 and finished the season in a lofty third position.

There would be no more obscurity, no more standing on Waterloo Bridge.