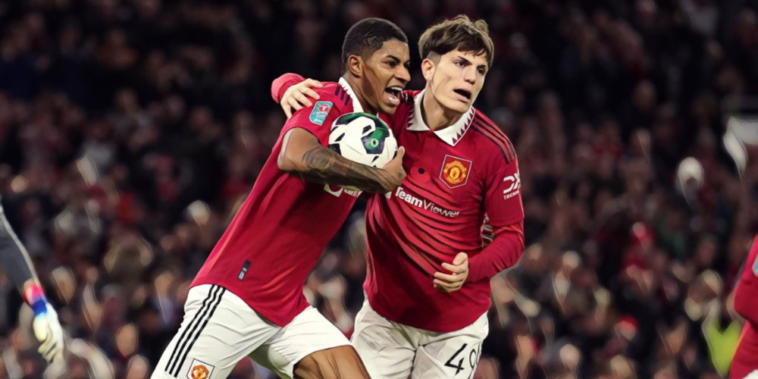 United progressed to the fourth round of the competition after an entertaining second half at Old Trafford, in which the two teams exchanged six goals after the break.

Villa twice took the lead through Ollie Watkins and a Diogo Dalot own goal, but goals from Anthony Martial and Marcus Rashford brought the sides level. An outstanding cameo from teenager Alejandro Garnacho then inspired the Red Devils to victory, as the 18-year-old teed up goals for Bruno Fernandes and Scott McTominay to seal a 4-2 win.

United will face Burnley in the next round and Ten Hag was pleased with the spirit his side showed to come from behind.

“Our two halves are never the same,” he told Sky Sports. “We controlled the game in the first half by good pressing, we won a lot of possession but then did the wrong things. Bad in transition, missing the pass, one step too late passing in behind so we missed a lot of opportunities. We were sloppy and had some corners against us. At half time we said keep the pressing but be more direct. I’m proud of the team we could do that, we are happy tonight.

“They [Aston Villa] play with a high line so you have to pass the ball behind and we were quite successful in the second half. The problem in the first half was that we had too many touches and missed the moment that’s why we brought Christian Eriksen on.

“Happy with that resilience. That’s what we need and have to show every game, I was so disappointed and mad on Sunday because we didn’t fight. We were sloppy, especially in the defence and United players always have to show 100% discipline.”

Ten Hag discussed his side’s season so far and believes his team have shown signs of progress as the Red Devils look to implement a brand of ‘high intensity’ football.

United travel to face Fulham in the Premier League this weekend in the club’s final fixture before the World Cup break. The Dutchman said that he will use the season’s pause as a time for reflection ahead of the second half of the campaign.

“We continually analyse and reflect, now we have a bit more time. We can go a bit deeper and we will do that and see where we can improve.”