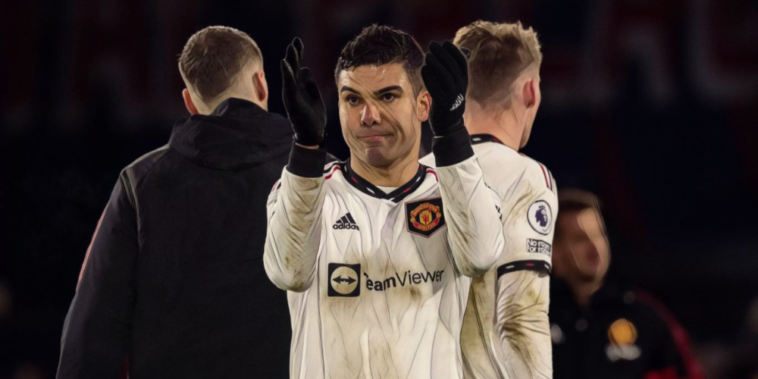 Erik ten Hag insists Manchester United ‘have an idea’ how to deal with the absence of Casemiro this weekend, as the club take on Arsenal at the Emirates.

United travel to face the Premier League leaders in a huge contest this weekend, but will be without the services of the influential Casemiro who will miss the clash through suspension.

The Brazil international has been a vital presence in the Red Devils’ recent run of form, which has seen Ten Hag’s side win nine of their last ten games in all competitions.

Casemiro picked up a suspension after being booked at Crystal Palace in midweek, but Ten Hag is confident that his side can cope in the midfielder’s absence.

Arsenal are five points clear at the top of the Premier League table and Ten Hag is anticipating a tough test for his side in north London.

“It is obvious they are in a really good run and I think they deserve the position where they are now. It is a really good structure, how they play,” he said at his pre-match press conference.

“It is a really good mentality and a winning attitude in the team. That is why they are top of the list. They are in a great run. It is up to us to beat their run and we will do everything to do that.

“We beat Arsenal last time without Casemiro. We have an idea of how to deal with that.”