Brighton and Hove Albion head coach Graham Potter is among the many rumored candidates to become Tottenham Hotspur’s new manager. Potter, who took Östersunds FK from the Swedish fourth division to beating Arsenal 2-1 at home in the Europa League in the space of just seven years, has enhanced his reputation at Swansea and Brighton as one of England’s brightest young coaches.

While Brighton’s league position does little to impress, it’s worth noting that the Seagulls have been prodigiously unlucky according to their underlying metrics. The south coast outfit have scored just 33 goals from their expected goals total of 45.9, the biggest underperformance in the league by some distance. It shows how Potter’s style of play has been more effective at Brighton than it appears at first glance, and with his reputation of espousing attractive, possession-based football and developing young talents, he should be among Spurs’ foremost targets for their head coach.

Tactically, Potter is flexible with his formations. This season, he’s used a 4-2-3-1, a 4-2-2-2, a 3-5-2, and a 3-4-3. While he’s primarily used the latter, he is unafraid to change setups before or during games depending on the opponent. Part of the reason he is able to do this, though, is that across the systems he uses, there are clear tenants to Potter’s style of play that remain consistent.

Brighton look to build up patiently from the back. It’s not a dogma — they will sometimes use left-wingback Dan Burn as an aerial target from goal kicks — but it’s a defining aspect of their play. 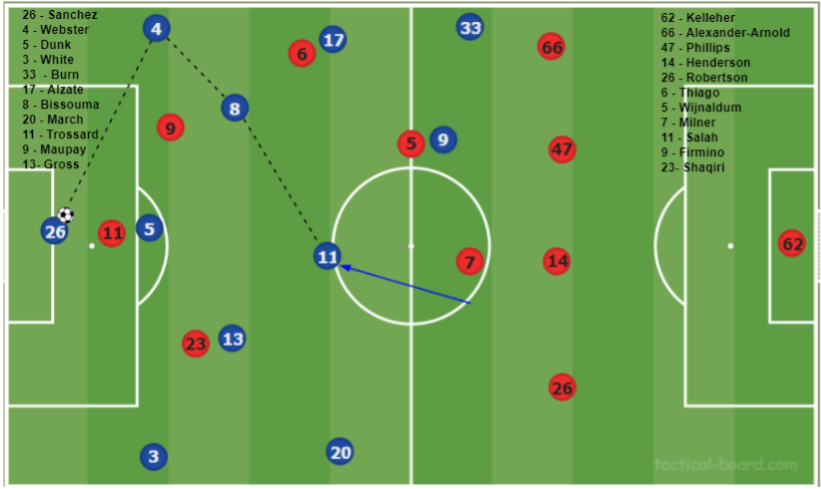 This sequence against Liverpool is a good example of how Brighton build from deep. They played in a 3-5-2, but in the build-up, Bissouma and one of Pascal Gross or Steven Alzate would position themselves in the half-spaces ahead of the back three while Ben White and Adam Webster would split wide and Solly March and Burn would push up. Because Brighton’s outer center-backs were so wide, if Liverpool tried to block the passing lanes to them from a goal-kick, they would leave Bissouma and Gross unmarked. So, Sanchez has an easy passing option to Webster.

This meant Brighton could play around the first line of Liverpool’s press before playing it back inside to a midfielder, in this case, Bissouma. Because James Milner wanted to hold his position to protect the back four, Leandro Trossard is able to drop deep and is unmarked to receive the ball and then drive forwards. Brighton’s build-up structure, with their outer center-backs moving wide and two midfielders dropping deep in the half spaces, ensures they can consistently resist a high press and pass through it.

Against teams who sit deeper, Brighton are initially patient in their attacks. The center-backs rotate the ball amongst themselves to try and draw the opposition out before directly passing to either a forward dropping deep or a wingback. Potter wants his teams to play through quick passing combinations out wide before working the ball back inside for through balls or creating space out wide for a cutback. These slick passing moves are facilitated by Brighton’s intelligent attacking structure. 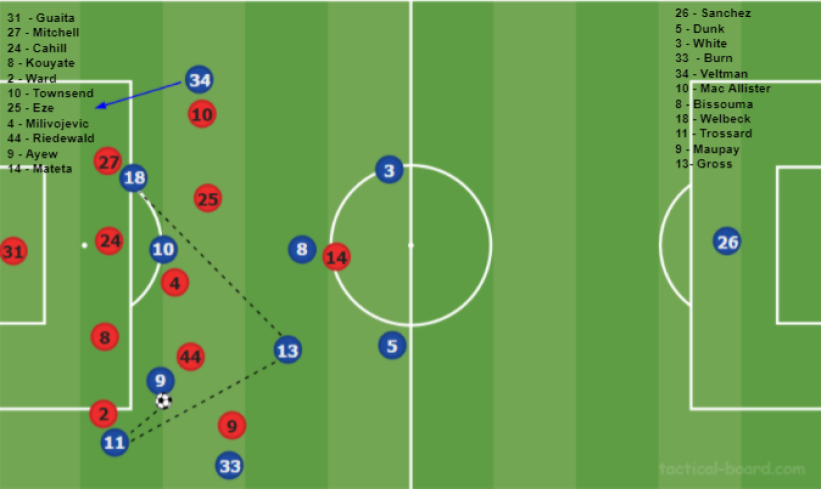 Their goal against Crystal Palace in February is a good example of how this structure works. In the above situation, Palace are situated in a narrow, deep, and compact 4-5-1 shape. There’s limited space in between the lines and a number of Palace players in the box ready to block shots and stop crosses. But Brighton are still able to score because of the positioning of their own players.

When Maupay has the ball, he’s under pressure from Riedewald and can only pass it to Trossard, who is also under pressure from Ward. However, because Burn is positioned very wide on the left, Ayew is dragged with him and a passing lane is open between Trossard and Gross. Since Palace’s midfield are very deep, Gross is in space and is able to pick out a ball to Welbeck in the box.

While this is occurring, Veltman’s wide starting position on the right-hand side allows him to make a run on the blind side of Towsend and Mitchell. This allows him to be unmarked in the box, and when Gross’ ball in the box is miscontrolled, Veltman is able to pick up the pieces and score.

Veltman’s goal reveals several aspects of Brighton’s attacking play under Potter. They always have at least one player on each flank holding the width to stretch opposition defenses. Players also shouldn’t be positioned on the same vertical line (from the player’s perspective, not vertical in terms of the diagram).

For the build-up to the goal, only Mac Allister and Bissouma are on the same line, and that is only for this phase of play. The rest of the players are arranged on different vertical lines to create triangle and rhombus patterns across the pitch to retain and progress the ball easier. Runs from deep, either to offer support to the man with the ball or to find space in the box to score, are also encouraged, especially if the ball is being switched from one flank to the other.

These basic principles form the structure of the team and the core patterns of play they rely upon in attack. The other crucial aspect to Potter’s philosophy is that the ball has to be moved quickly. In the Veltman goal, the ball is first moved with a series of one-touch passes before an early ball is played in. If the ball is moved too slowly, the space that Brighton’s structure and movement create will be closed down and opportunities will be difficult to create. Brighton’s ability to execute this style of play with the required urgency is a testament to Potter’s excellence as a coach.

Defensively, Brighton will press more limited sides high up the pitch if and when they try to play out from the back. Generally, though, they tend to press situationally in response to certain triggers such as a miscontrolled pass or a player receiving on their weaker foot. When such triggers aren’t present, they fall into a solid 5-4-1 mid-block that’s centrally compact and difficult to pass through.

However, Brighton are more aggressive in their defending when they immediately lose the ball. 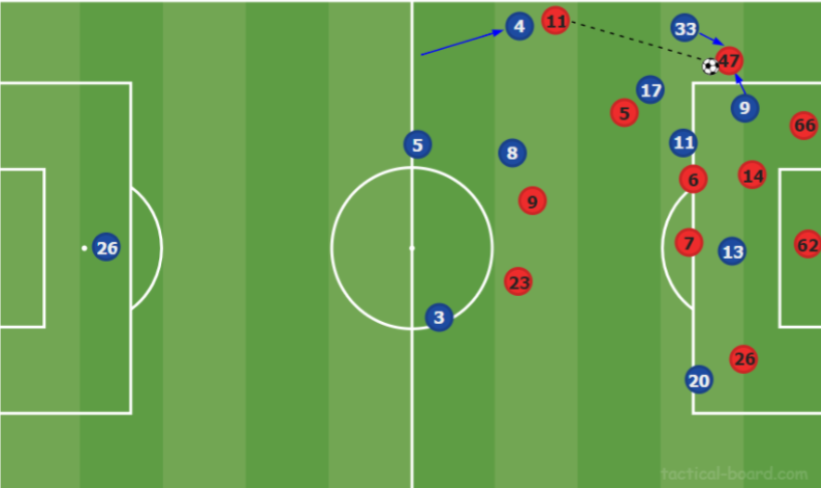 This situation against Liverpool is a good example of Brighton’s effective counter-press. Alzate loses the ball near the Liverpool box and Phillips regains it. Two players, Maupay and Burn, pressure the man with the ball while Alzate and Trossard block off two available passing options in Thiago and Wjinaldum. Phillips’ only option is to play it wide to Salah, who is being put under pressure from Webster.

Ultimately, Salah is forced to try an overly ambitious pass inside to Firmino and Brighton regain possession. Unlike Liverpool’s counter-press, this isn’t designed to create counter-attacking opportunities. Instead, it is meant to allow Brighton to restart their patient build-up play or to delay the opposition attack until they can get enough men behind the ball to assume their defensive stance. It’s been an effective aspect of their play all season.

Spurs should suit Potter’s style of play well. While they played a very different style under Jose Mourinho, the Englishman underwent a similar transition of style at Brighton. He’s successfully moved Brighton away from the defensive tactics of Chris Hughton towards a more progressive style, and with Tottenham having a far superior squad and budget, he could certainly do it again in North London.

Given that players like Japhet Tangaga and Ben Davies can play both as center backs and fullbacks, Potter should be able to switch systems relatively comfortably. In Joe Rodon, his former player at Swansea, and Toby Alderweireld, he has two excellent ball-playing center-backs, although upgrades in this area could be welcome.

Pierre Emile-Hojbjerg and Tanguy Ndombele form an excellent double pivot in midfield, but Moussa Sissoko may prove a bit technically limited for Potter’s approach. Further up the pitch, Spurs have a number of technically excellent players who should be able to adapt to a more structured attacking game.

Potter is the sort of coach that can give Spurs long-term stability on and off the pitch. He’s not a big name, but neither was Mauricio Pochettino when he arrived at the club. Potter makes sense for Spurs, tactically and personality-wise, and he should be given the chance to be their head coach next season.