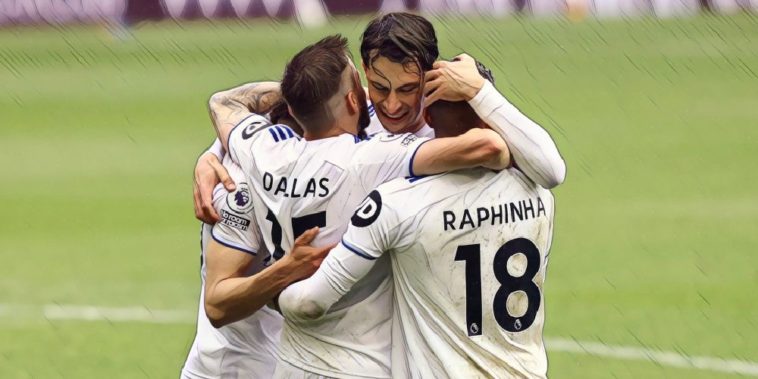 Leeds United continued their fine return to the top-flight with another high profile scalp, Marcelo Bielsa’s side running out 3-1 winners over Tottenham Hotspur on Saturday afternoon.

The hosts had failed to win any of their last three league games, yet made a fast start at Elland Road. Patrick Bamford saw an early strike turned behind by Hugo Lloris, before they grabbed a deserved lead after just 13 minutes, Stuart Dallas lashing high into the roof of the net from close range after an initial good stop once again from Lloris.

That early advantage lasted just over ten minutes as the visitors drew level, Dele Alli with a delightful through ball to tee up Heung-min Son, the Korean international duly slotting home for his 17th Premier League goal of the season.

The away side then thought they’d completed a swift turnaround midway through the first-half, Harry Kane latching onto another Alli through ball to dink over an onrushing Illan Meslier, before VAR intervened to deny the England captain, with what was an extremely marginal offside decision.

In an enthralling, end-to-end first period, it was the home side who nudged ahead once again on the stroke of half-time, Patrick Bamford tapping in after an excellent pull-back from Ezgjan Alioski down the left.

With the game nearing its climax, the home side dealt a telling blow to Spurs’ Champions League ambitions, summer signing Rodrigo rounding off a lovely team move following good work from Raphinha, the Brazilian surviving a tight offside call in the build-up.

That late strike ultimately sealed the three points for Marcelo Bielsa’s side, ensuring another impressive result against the division’s top sides this season.

⚪️ #LUFC’s home record against the ‘Big Six’ this season

Following that win, the Argentine was full of praise for his side, highlighting their ‘rebelliousness’ to go toe-to-toe with the so-called ‘better’ teams in the league.

“For a while now we hope to play on an equal term with an important opponent. In some ways today we achieved this,” he told BBC Sport.

“The conclusion is linked to the enthusiasm of the players. The rebelliousness to try and look like the teams that are better than us.

“He was very combative, unbalancing and confident in his qualities. This allowed him to have such a good performance.

Leeds are next in Premier League action away to Burnley next Saturday.

Tactical Analysis: Why Graham Potter is a perfect fit for Spurs