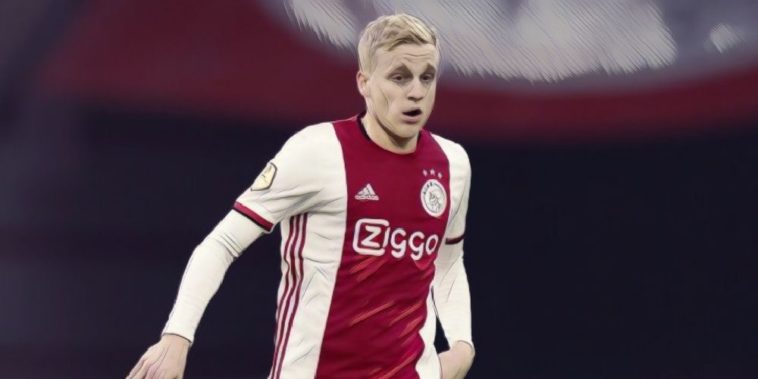 A perennial issue of squad building is how to purchase players beyond a first XI. Should teams buy like-for-like replacements for starting players such as Liverpool did with Takumi Minamino or acquire players who can serve as “Plan Bs” such as Olivier Giroud at Arsenal? In signing Ajax midfielder Donny Van de Beek, Manchester United seem to have opted for the latter, as the £40 million man will be an alternative option to talismanic duo Paul Pogba and Bruno Fernandes.

For Ajax, Van de Beek most regularly played as a number ten in a 4-2-3-1 or as an advanced eight in a 4-3-3, although the departure of Frenkie de Jong has seen the 23-year-old play in a double pivot to give Erik ten Haag’s side greater dynamism from deep.

While he is unsurprisingly a greater goal-threat when playing higher up the pitch, Van de Beek’s Ajax career shows remarkable consistency in goal contributions. In 91 matches during the past three Eredivisie seasons, he scored 28 goals and assisted 21 times, averaging better than a goal or assist every other game.

The Dutchman also has an uncanny ability to rise to the occasion. In Ajax’s sensational Champions League run, he scored or assisted in every two-legged encounter with Real Madrid, Juventus, and Tottenham. The likes of De Jong and Matthias De Ligt may have got the plaudits, but Van de Beek too demonstrated he could perform on the most prestigious stage in the game.

The versatile midfielder possesses a very all-rounded playing style. His 2.7 tackles plus interceptions, 3.3 ball recoveries, and 4.3 duels won all per 90 indicate that he has the defensive work rate to play in a deeper role, while his 1.8 key passes and 1.0 successful dribbles per 90 show that he can be creative as well, albeit not to the extent of a pure playmaker. His most valuable attribute, though, is his spatial awareness.

Van de Beek is exceptional at locating space and exploiting it either through forward passes or intelligent movement. By quickly scanning the area around him to seek out open space, he ensures that when he receives the ball he can immediately move it into a dangerous area without slowing the play down.

The 23-year-old’s excellent body positioning helps with this, as it allows him to receive and play the ball swiftly. The Dutchman also has the technical ability to receive the ball and play passes at varying angles and with both feet, making it harder for opposition players to predict where and how he will make a forward pass. Van de Beek may not be blessed with exceptional creative passing, but his technical and tactical quality means that he can still move the ball progressively and find teammates in dangerous areas.

He is also proficient at exploiting available space himself. At six feet tall, he can be physically imposing when dribbling, using his body to shield the ball as he carries it forwards. Van de Beek is not particularly skilful, but his ability to make driving runs with a combination of strength and speed allows him to move the ball up the pitch and create space for himself or his teammates.

The 10 cap Holland international is also extremely intelligent in his off-ball positioning and movement. He possesses a strikers-like instinct for where to be and when, and always seems able to find pockets of space where he can put away chances or play deft passes to teammates in better scoring positions.

Van de Beek possesses the ability to both make penetrative runs beyond a defensive line and loiter in the space in front of the line when it is pushed back by another player’s movement. It’s this awareness that allows Van de Beek to score so many goals and it is what sets him apart from most other attacking midfielders.

His move to Manchester United may seem perplexing at first glance. Given the success of Bruno Fernandes as a number ten in Ole Gunnar Solskjaer’s preferred 4-2-3-1 and Paul Pogba’s return to form playing as a deeper, press-breaking midfielder in the pivot, there is no obvious role for Van de Beek in the first-choice starting line-up.

Some have claimed that he could be used as a defensive midfielder, but he lacks the necessary stamina, positional discipline, and pure ball-winning ability to thrive in the role. More than this, he would be unable to utilize his greatest strength of attacking the space in a defensive role. It seems clear that Van de Beek will be used as a rotation player. Given that United have more pressing concerns in other areas of the squad, it may appear strange that they have prioritized reinforcing their bench.

From a different perspective, though, Van de Beek is an astute signing. At £40 million, he is a bargain in the modern market for a player of his quality and potential. And as the tail-end of the 2019/20 season showed, Solskjaer does not trust his bench players enough to give his starting XI a rest in important games.

The likes of Jesse Lingard and Andreas Pereira have failed to produce in the number ten role, whilst Fred and McTominay don’t provide the same creativity and drive as Pogba does from deeper, leaving the Frenchman and Fernandes to play virtually every minute of every game without a break.

We’ve also seen that while improving United in certain respects, Solskjaer is yet to implement a clear attacking structure on his side and instead gives his players the positional freedom to find space and combine as they see fit. With this in mind, having players of sufficient technical and tactical quality throughout the squad is essential.

Despite being a different type of player to both Pogba and Fernandes, Van de Beek can provide Solskjaer with a useful and reliable option in both roles. With striker Anthony Martial willing to drop off and drift wide, the Dutchman could provide line-breaking runs ahead of the Frenchman when used as a number 10 to give United greater attacking dynamism in the final third.

He would also thrive off of the vision and long-passing of Pogba when making these runs. If playing in a deeper role, he could rely on his ability to move possession quickly and carrying the ball to be effective. He would also work well in tandem with Fernandes, who frequently drops deep to collect the ball and leaves space for forward midfield runs.

He may take time to settle into the Premier League, a process that could be hampered by limited first-team minutes. Should United fail to sign Jadon Sancho or another quality right winger, Van de Beek could find the switch to Old Trafford even more difficult. At Ajax, he was used to playing in a team that could stretch opposition defences with width. United, however, play a narrow attacking line and have fullbacks who are not major offensive threats.

Should Sancho arrive and Aaron Wan-Bissaka continue his development into a more complete right-back, though, United could maintain the sort of width that creates the space in the channels that Van de Beek loves to exploit. The 23-year-old will offer something new to Manchester United irrespective of the players who accompany him, but he will undoubtedly perform better when playing alongside another creator such as Pogba and players who can hold the width like Sancho.

For a relatively minimal fee relative to his quality, Man United have made an astute addition to their squad in Donny Van de Beek. It will not be enough to make significant strides in closing the gap to Liverpool and Manchester City, but if accompanied with other sensible buys, United could start making their ascension back to the highest echelons of English football.